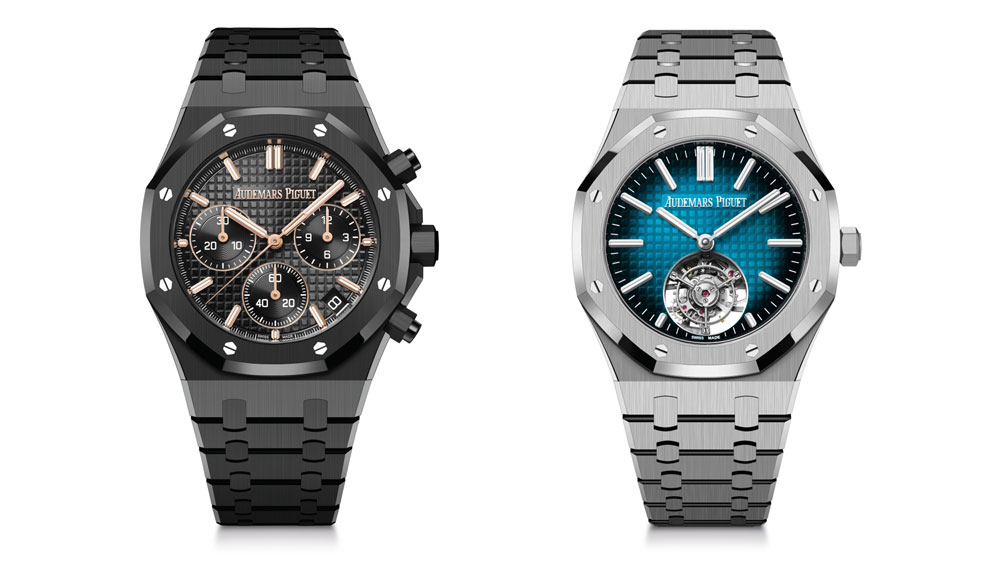 Audemars Piguet leans into its ongoing 50th-anniversary celebration of the mighty Royal Oak with two new limited editions that reinterpret the model in up-to-the-minute livery and materials. There is a titanium Selfwinding Flying Tourbillon and another new all-black introduction in a ceramic chronograph with pink gold hands and markers.

The Royal Oak anniversary lineup has so far been flush with tourbillons—in January, we saw a new Flying Tourbillon, followed by an openworked version of the complication, and then the Selfwinding Flying Tourbillon Extra Thin RD#3 in the spring. The new ref. 26730TI.OO.1320TI.04 stands out because of two outstanding elements combined for the first time in a Royal Oak: a titanium case and bracelet with a blue-green-to-black gradient dial that is one of the most creative interpretations of the grande tapisserie aesthetic. It makes you wonder why Audemars Piguet doesn’t do a limited edition every year with a new color combination. If we’re lucky, maybe they will. Limited to 50 pieces, it will only be available exclusively in North America until the end of October, meaning you better run, not walk, to your local AP boutique.

AP knows what everyone is after. All-black ceramic Royal Oaks have been all the rage, so the latest version, the Royal Oak Selfwinding Chronograph ref.  26240CE.OO.1225CE.01 will be just as hot to trot, meaning you will have to do serious finagling to get one on the wrist. Elegantly trimmed with fine rims of rose gold on the subdials, hands, markers and a full signature in 24-karat gold, it’s a knockout. The noir backdrop is the perfect platform for the rose gold flourishes which offer a stealth dose of flash. The case is 41 mm and the movement is the automatic caliber 4401, Audemars Piguet’s integrated flyback chronograph, which debuted in the Royal Oak collection last year. It bears the coveted 50th Anniversary imprint, openworked on the rotor, which has been blackened in order to match the color of the case—a practice usually reserved for complicated timepieces. The price, not surprisingly, is upon request.