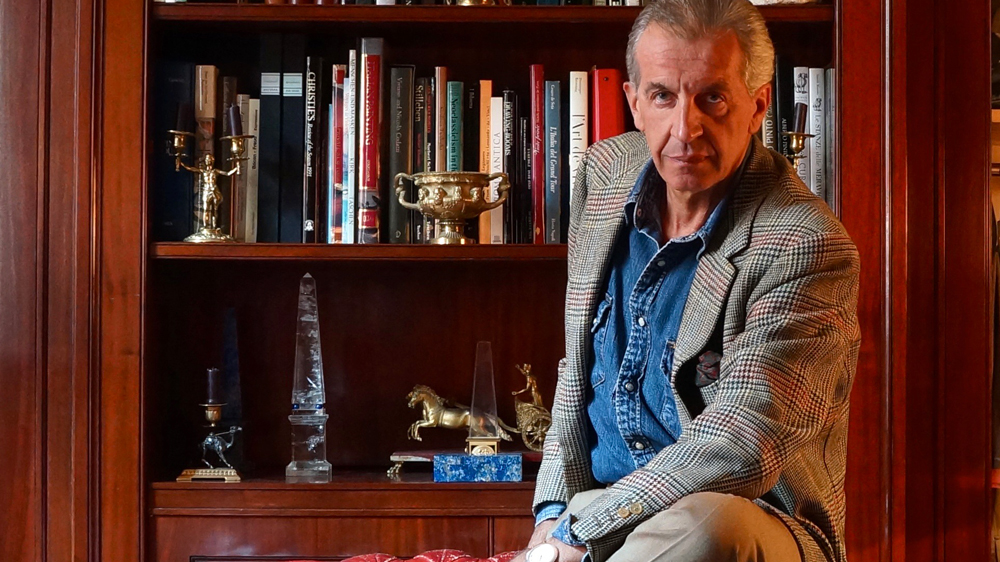 Serious watch collectors and experts know the name John Goldberger. He’s not only considered an important collector, but also regarded as an authority on watches. He’s the man behind a number of watch tomes: 100 Superlative Rolex Watches, Patek Philippe Watches, Longines Watches, Omega Watches, and, his latest, A Journey into the Deep, with text by Daniel Bourne, which chronicles Reza Rashidian’s Rolex dive watches collection. Goldberger also serves on the Cultural Council of the Fondation Haute Horlogerie and on a board of advisors for Phillips auction house.

And his real name is Auro Montanari.

“I took the name [John Goldberger] to protect my privacy, and for fun,” said the tall and somewhat rugged 60-year-old on one of his many visits to New York City. (His home is in Bologna, Italy, where he lives with his wife.) His first name, Auro, sounds like “oro”—the Italian word for “gold”—and a “berger,” or shepherd, works in the mountains, which is close to montanari, the Italian word for “highlanders.” As for John, the name struck him as “typically WASP.”

A Journey into the Deep  Photo: Courtesy of Rolex

Montanari’s interest in watches started while he was still a student in the 1970s, an era that threatened the extinction of the mechanical watch. “I was browsing in the flea market with my parents, longtime art collectors, and I realized how the cost of the vintage and secondhand watches was so cheap compared with the new modern quartz watches,” said Montanari. So he started snapping them up.

After finishing his university studies in design and art, he took off for California. “I spent four years taking photos, surfing, and playing basketball,” he said. “While I was there, I was attending and buying watches in the small watch conventions around the States. My passion for watches was born there.”

That passion triggered a desire to be informed, to know more about what he was collecting. So Montanari started reading, asking questions, and learning about watches and their history. Out of that curiosity came his own books, the first, Omega Watches, in 2005. The photo of its author, John Goldberger, showed the back of his head.

His privacy has evaporated in recent years, however, and the sale in May of one of his watches at auction—the only Rolex Daytona in white gold known to exist and dubbed “the Unicorn”—has pushed his name further into the spotlight. That sale nabbed nearly $6 million, which Montanari gave to the charity Children Action.

Now Montanari is working on a book, a new edition of 100 Superlative Rolex Watches Part II, which will be ready next year. When he’s not focused on watches in some capacity—writing, consulting, speaking, collecting—he’s running a company. “My family business is in electronics and telecommunications,” he said. His father “set up a company named Aur.el dedicated to high technology in electronics; the name came from my first name, Auro. I am the CEO of the company now, because my father passed away six years ago.”

How does he do it all? Said Montanari, “I dedicate eight hours a day to my business and four hours to my passion, watches!”

So what does he predict will be the next big thing? “That’s an excellent question—everyone wants to know what brands now will gain value with time,” he said. “The Omega and Longines watches already have the correct value on the market in my opinion. There are other watch companies, like Eberhard, Minerva, Universal, Movado, and Breitling, which are undervalued at the moment. They manufactured in the forties and fifties magnificent and well-designed chronographs with exceptional movements.”

“There is a wide offering on the Internet,” Montanari continued, “but my advice is to check with your eyes and personal hands the watch that you like. Maybe if you like the mechanics of the watch’s movement, the pocket watches are undervalued.”

The watch on his own wish list might surprise you. “When I was young I was very impressed by the movie 2001: A Space Odyssey by Stanley Kubrick, and Hamilton designed and manufactured a few examples of a special digital watch with an incredible design,” he said. “I would love to own it.”

And that’s really what the world of collecting is all about. “Collecting watches should be, above all else, fun—buy what you love and can afford,” said Montanari. “A true collector must with great decision, even ruthlessly, define the limits of its collection, and should never exaggerate. One can build a beautiful and rewarding watch collection commensurate with one’s budget if one takes the time to acquire the knowledge necessary to make an educated decision. A beautiful watch ready-to-wear is the best bargain, but a rare watch with great history and provenance also gives you an aura that you just could not describe.”