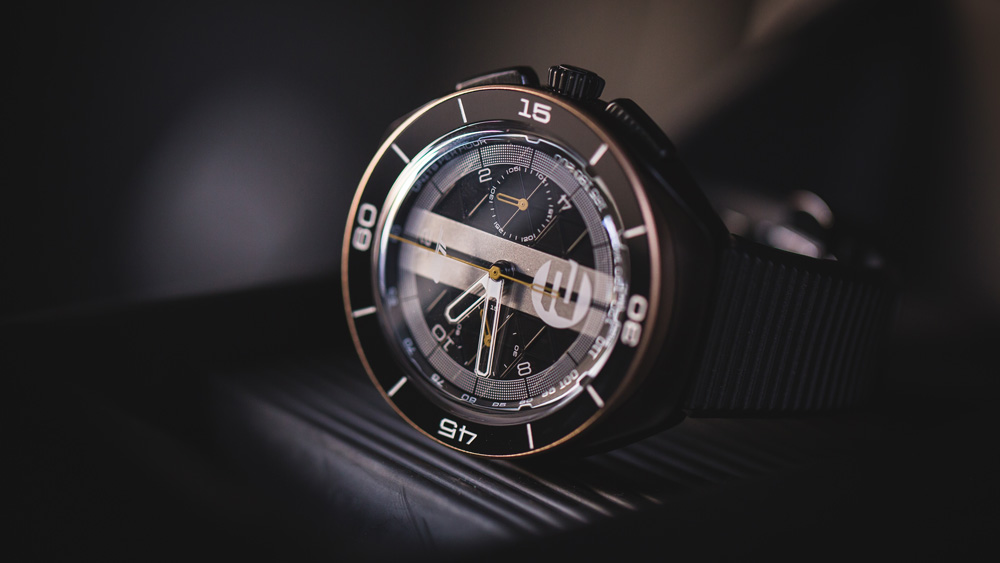 Founded seven years ago as an automotive-inspired watch brand with a penchant for retro styling, Autodromo recently unveiled its most ambitious timepiece to date: the Ford GT Owners Edition Chronograph, a customizable wristwatch ($11,500) available exclusively to owners of Ford’s $400,000-plus supercar. Last year, Autodromo came out with the Ford GT Endurance Chronograph (retailing significantly lower at $695) with a Seiko-powered mecha-quartz chronograph movement.

Introduced in 2004, the Ford GT paid tribute to the Ford GT40, a consecutive four-time winner of the 24 Hours of Le Mans from 1966 to 1969. For the second generation of the supercar, which began to roll off the Dearborn, Michigan–based automaker’s assembly line in December 2016, Ford ultimately approached Autodromo to create a customizable luxury watch befitting the car’s high-performance profile.

More attention has been paid to the insides of the timepiece, which features a La Joux-Perret 7773 column-wheel flyback chronograph movement with automatic winding, a sapphire crystal dial and hand construction, and a 43 mm ceramic and stainless-steel case. While the movement is Swiss, the watch is hand-assembled in Autodromo’s workshop in Dobbs Ferry, N.Y. Each watch is engraved with the vehicle’s chassis number.

“The car is much more futuristic and less nostalgic compared to the 2004 GT, so when we were designing, Ford was all about today and the future,” says Autodromo founder Bradley Price. “They wanted something that was very contemporary. At the same time, the car does have echoes of the past—you can see the lineage going back to the ’60s. So the watch, while being very contemporary, also had to have echoes of the past. I’m always interested in combining old and new things in interesting ways. One of the design challenges was to balance those things: being futuristic like the car but also making something people would like to wear.”

Price, an industrial designer by training and a car lover by passion, reconciled that challenge by relying on a bi-compax chronograph layout—a traditional racing layout—on the dial. He did not, however, try to miniaturize the car’s aesthetic features for the wrist. Instead, he sought to create a timepiece that captured the feel of the Ford GT.

“Everything about the car is very purposeful, restrained; the interior is very technical,” Price says. “So in designing the watch, I wanted it to have a technical look and feel to it that goes with the car. The watch has some styling cues from the car, but if you’re wearing it in the car, the feeling and atmosphere totally fits the car. That’s why the design team of the car approved the design; they felt I had captured the feeling of the car.”

At the same time, Price insisted on giving clients the ability to customize their watch. Using a 3-D configurator at fordgtwatch.com, which Price describes as “a soup-to-nuts bespoke website,” owners can choose a color palette to match the exact color of their vehicle, even if it’s part of an extended palette. “I wanted to be able to give customers something very exclusive,” he says, “a watch that matches their car, made to their tastes, just like the car. Each one is a little different from the others.”

The company is now accepting orders for the Ford GT Owners Edition Chronograph.

“We’ll make up to two serialized watches per car,” Price adds. “Being in the car hobby myself, I know some people may buy this watch and never wear it because they may want to keep it with the car, new in box. We’re offering two so they can keep one with the car and wear one even if they sell the car. That way, they can have their cake and eat it, too.”