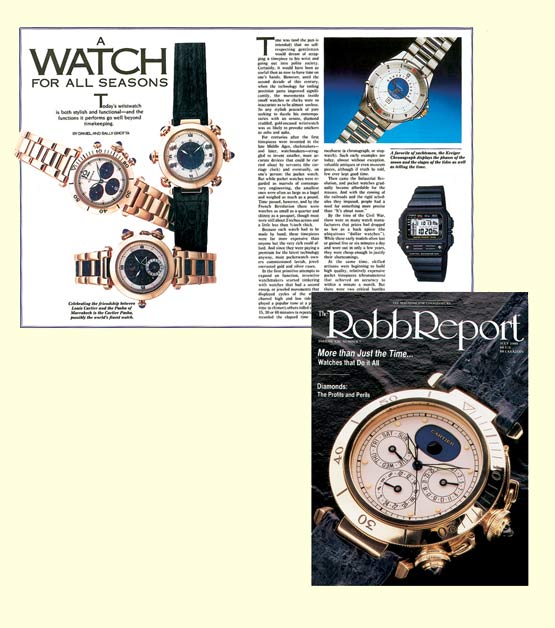 The most remarkable watches are often one-of-a-kind pieces, custom-made for clients of means. This is true of the original Cartier Pasha watch, which Louis Cartier created in 1931 for Thami El Glaoui, the pasha of Marrakech. The watch was an early attempt to address needs that most busy, successful modern people will recognize.

El Glaoui possessed a pronounced taste for life’s finer things, and he led a relatively active life, keeping fit with daily swims in his palace pool. Seeking a timepiece that was durable enough to withstand constant submersion in water but elegant enough to wear when meeting celebrities and heads of state, he turned to Cartier for a one-of-a-kind solution. In response, Cartier created the Pasha, a gold wristwatch that could be rendered watertight by a case that screwed shut and a chain-secured cap that fit into the crown.

After delivering the timepiece to the pasha, who was ousted from power in the 1950s, the Cartier company lost track of it. The whereabouts of the exquisite timepiece, which features a protective grille pattern on its face and an 18-karat solid gold case engraved with the numeral 1, remain unknown. “Maybe he gave it to an heir, or a friend,” suggests Stanislas de Quercize, president and CEO of Cartier North America. He adds that Cartier is actively seeking the watch for its corporate collection. “We have hopes of finding it and buying it back.” He insists that the quest could certainly bear fruit. After all, the company did manage to recover a five-strand Art Deco–style necklace created for the Maharaja of Patiala in 1928. The necklace, which once contained almost 1,000 carats of diamonds, had been missing for decades when it was found in London in 1998.

Still, the memory of the vanished timepiece burned brightly in the minds of Cartier’s stewards, who eventually launched a Pasha line of watches in 1985. The neo-Pasha was round, a shape that set it apart from the rectangular, square, and oval cases of other Cartier watches. Ideal for sophisticated beachgoers, the Pasha was water-resistant to a depth of 100 meters as well as sand-proofed, and it was available with either a gold bracelet or a honey-colored, water-resistant leather strap.

In the years that followed, the Pasha line was expanded far beyond the two 1985 models. Currently, more than 50 different limited edition Pasha models are available, including a new tourbillon priced at approximately $145,000. Past models have included the day/date Moon phase Pasha, which appeared on the cover of our July 1989 issue. Another enduring favorite is the golf version of the watch, which can record a foursome’s scores. Buttons marked with different-colored gemstones—a sapphire, an emerald, a yellow sapphire, and a ruby—distinguish the players. This watch earned a featured spot in Robb Report’s 1996 Ultimate Gift Guide, with a listed price of $79,300.

During the mid-1990s, Cartier executives were pleasantly surprised to find that women were drawn to the Pasha watch. Rather than reduce the case size to create a more traditional ladies’ version, Cartier instead maintained the large case and simply added a few feminine touches. The first Pasha for women appeared in 1998. Available in yellow gold with a pink alligator strap or gray gold with a lavender strap, it featured a tic-tac-toe grid of yellow, white, and pink diamonds laid over its dial. Cartier continues to release new Pashas for women, including an enamel model with diamonds that appears on page 92 of this issue.

Neither the Moroccan leader nor Louis Cartier could have predicted that the unique, purpose-built timepiece would someday inspire an entire line of magnificent wristwatches. But 70 years later, the Pasha is a permanent part of the Cartier family. “The Pasha embodies all the values of Cartier,” says de Quercize. “It is here to stay forever.”