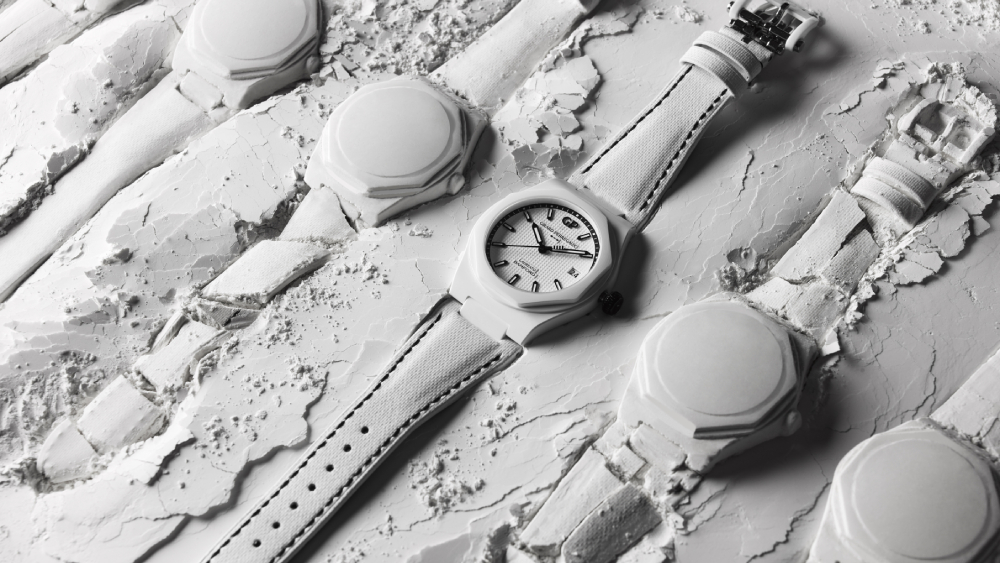 George Bamford just reinvented his own take on reinvention. For the last 16 years, the founder of London customizer Bamford Watch Department has been known for going dark, outfitting everything from Rolex Submariners to Audemars Piguet Royal Oaks in charcoal-hued coatings of titanium or graphite, finished with blacked-out dials and baby-blue hands. The style has gained a cult following, but now, in partnership with Girard-Perregaux, Bamford has created his first solid-white timepiece.

To celebrate 45 years of Girard-Perregaux’s Laureato sports watch, Bamford proposed the inverse of his signature style. The 38-by-10.2-mm “Ghost” version comes with a polished, satin-finished case in high-tech ceramic, which is not only stainless and hypoallergenic but also scratch- and heat-resistant. Its dial features a Clous de Paris pattern, black accents on the applied luminescent indexes, baton-shaped hands, a minute track and the name of both companies. The Ghost is limited to 45 pieces and available with either a ceramic bracelet for $16,100 or a textured rubber strap with black stitching for $13,900.

“I’ve always been a big admirer of what George is doing,” says Girard-Perregaux CEO Patrick Pruniaux. “I think he treats all of the brands with a lot of respect but, on the other hand, brings his own personal view. He’s a true artist.”

But this was not always the sentiment among heritage-brand executives. For most of its history, Bamford’s company was a black sheep within the watch industry proper; twisting established design codes ruffled the feathers of companies keen to keep a firm grip on their brand images. But it took just one forward-thinking watch titan to get hip to Bamford’s out-of-the-box creations and change that perception. That would be Jean-Claude Biver, the former president of LVMH’s watch division, who in 2017 began delivering Bulgari, Tag Heuer and Zenith watches for official customizations. Kering-owned Girard-Perregaux followed suit last January after Bamford approached the company to customize a Cat’s Eye model at the request of a client, and the new Ghost suggests the joint effort won’t be a disappearing act. Bamford says his sights are already set on convincing the brand to re-envision its Casquette model, a digital-display LED watch from the 1970s that seems poised for a back-to-the-future return.

George Bamford, Inside the Tent

How did official partnerships change your brand?

They’ve pivoted my business. I’ve got friends. I’ve got postcards on my wall from people behind the watch brands I’ve worked with, and they serve as a reminder to me that one person said, “Welcome to the club.”

Did you have to pursue the watch brands that officially came on board three years ago?

A friend of mine happened to be sitting next to Jean-Claude Biver at a supper. She knows a lot about watches, but she was trying to think of what to talk to him about and she was like, ‘Oh, yeah, my mate George Bamford.’ He got on a plane the next day to come see me. How cool is that? He said, “Look, you’re in the shadows. You need to be in the light. Otherwise, you will be Kodak.” Now that we’re official, I don’t feel in the shadows.

What prevented these brands from taking your idea and doing it in-house?

I don’t know, but I can estimate. If it fails, they can hang it on my neck, but if it succeeds, then it’s a very good thing. Doing personalization is quite an intensive process. We can spend anywhere from five minutes on a request to a whole year, which is something we are doing with a client right now. We can spend the time to do that here, because we’ve been set up that way.

What made you decide to deviate from your all-black watch customizations?

I’ve always wanted an all-white watch—I wanted to do the opposite of what I’m known for. It was awesome to work with Girard-Perregaux in a new way that celebrates 45 years of the Laureato. It’s a technical boom, boom, boom, boom. And it’s one of those watches that could be on a slope, by the sea or just rocking it with a T-shirt and a pair of jeans.

How do you see the brand evolving?

Let’s just get through this year. I want to have fun, and I am having fun with some great people. I can’t remember who said the quote, but it goes: “The best way to predict the future is to invent it.”