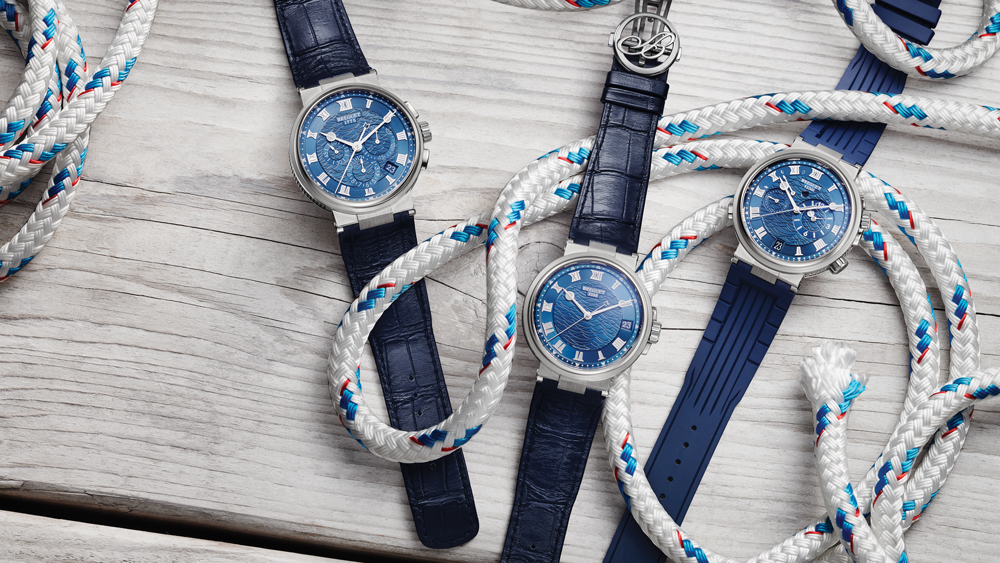 If you stroll around the inner Port Vell yacht basin in Barcelona harbor, you’ll likely come across a wooden walkway bedecked with an undulating steel-and-glass sculpture. This is the Rambla del Mar, which was built in the 1990s based on the design of Helio Piñon and Albert Viaplana. When Vincent Laucella, head of creation and product development for Montres Breguet, was in the city on a work trip years ago, the wavelike structure gave him an idea for an impending update to the brand’s Marine collection. Years later, the waveform remains an active element in the most recent generation of its Marine collection as the brand, through Laucella, once again recasts Breguet’s sporty annex.

Barcelona’s warm Mediterranean clime may be an especially important design influence for Marine, because this collection, unlike other professional or “tool” maritime-oriented watches, is much more of a lifestyle statement around on-the-water activity. Company verbiage devotes considerable copy to the appointment of its founder, Abraham-Louis Breguet, as horloger de la marine— watchmaker to the French royal navy. But in France at that time, a little more than four months after Waterloo, Breguet himself surely knew the title was longer in prestige than practicality. Always mindful that his pieces should represent the height of contemporary fashion, he would surely have approved of an effort to marry them with warm winds and languid summer evenings.

But today the Breguet brand is daunting territory for any contemporary designer. It has some of the tightest design parameters of any watch company, and for good reason. Abraham-Louis Breguet had an incredibly well-defined and consistent sense of aesthetics, and the looks of the watches are freighted with over two centuries of critical praise. The company’s traditional wristwatches, now part of the Classique line, were designed to hew closely to the originals, not to break new ground.

But this is exactly what was asked of independent designer Jorg Hysek, who sketched out the first Marine collection. The intent was to create a sportier Breguet watch, and his first version offered a more substantial bezel and a prominent torpedo-shaped crown, flanked by a pair of crown guards. Bracelets picked up the fluting of Breguet case sides. On the whole, the collection, which retained the silvered guilloche dial, Breguet hands, and Roman numerals, did not deviate far—something of an anomaly for a designer with a reputation for aggressive lines.

A touch of aggression is exactly what Laucella added later.

“The first-generation Marine was like the classical line,” he says, “but it was fatter. The intent of the second generation was to break the rule of the first Marine collection. It was going to be strong, much more macho.” Laucella’s first update to the collection, appearing in 2005, did away with many of the curves on the original, replacing them with clean surfaces and angles. These upsized pieces took the wave motif of the Rambla del Mar and interpreted it in a new guilloche pattern in the center of the dial. The large lugs featured a prominent angle, inspired by the booms of a catamaran, as they met the rubber strap.

If Laucella’s second-generation Marine was very much at home in the era of the chunky sports watch, his most recent update, which is launching in force this year, is, once again, contemporary. Laucella characterizes it as being more classic as well as modern. Certainly the profiles of the new Marine watches are thinner, closer to the proportions of the Classique line. But the use of a one-piece lug, large numeral appliqués with Super-LumiNova, and a more graphic waveform guilloche pattern are the most significant departures the brand has yet made from its original style. Laucella has succeeded in making the essential Breguet design elements contemporary, but he is aware it is probably a task that will require repetition. “Like every creator, I want to make Marine a universal watch,” he says—“but of course, that is impossible.”