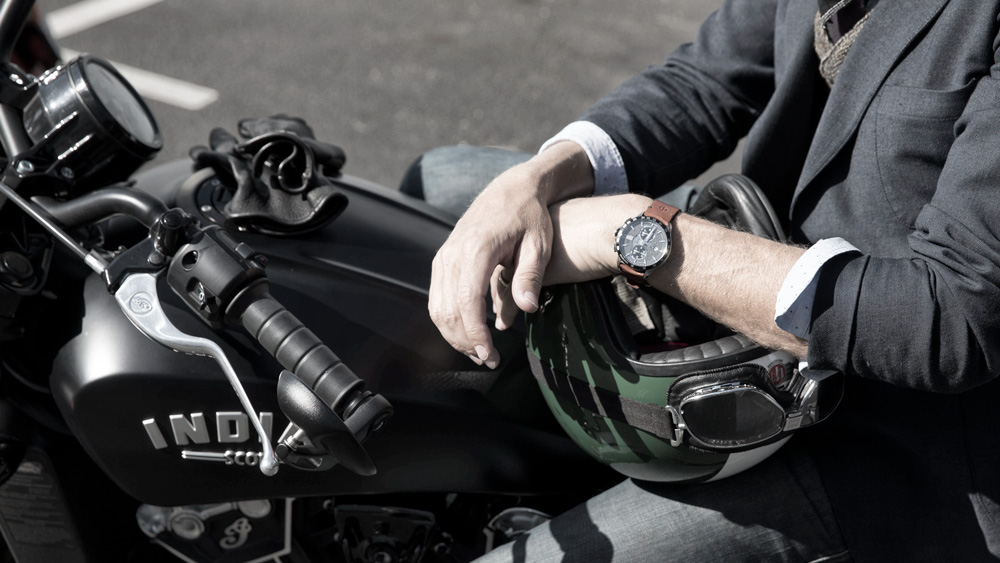 Baume & Mercier has teamed up with the iconic American motorcycle company Indian to create three new chronograph timepieces. The Clifton Club Scout and the Clifton Club Chief both pay tribute to the Indian motorcycles by the same name, while the Burt Munro Tribute Edition celebrates the famous motorcycle racer known for setting records on his Indian Scout. At Indian, which is touted as being America’s first motorcycle company, bicycle seller George Hendee and engineer Oscar Hedstrom began experimenting with mounting early gasoline engines onto bicycle frames before they developed the first prototype of the Indian Motorcycle in 1901. The company’s motorcycles would go on to set world records, and its most popular models—the Scout, made from 1920 to 1946, and the Chief, made from 1922 to 1953—became legends of the brand until the company went bankrupt in’53. Polaris Industries, which bought Indian Motorcycle in 2011, has since revived both the brand and its two most popular models.

The Clifton Club Indian Legend Tribute Scout limited-edition timepiece is arguably the most handsome watch in the trilogy. The chronograph comes in polished and satin-finished stainless steel and features a tachymeter scale and an open-worked dial inspired by Indian’s midsize Scout bike, evoking the shape of the cylinder heads of it famous V-twin engine. (This FTR750 model of the midsize Indian Scout was among the top motorcycle stories of 2017 on Robb Report. The opaline gray dial with black snailed counters represents the livery shade of the Scout motorbike, while the light brown leather strap from the American Horween Leather Co. mimics Indian saddlery and is meant to develop a weathered patina over time. The date disc displays 1901 (with the 01 in subscript) on the 19th of each month in tribute to the year of Indian’s founding. Other touches tying in the timepiece to Indian include a counterweight on the seconds hand with an “I” in the motorcycle company’s signature script and the brand’s logo and founding date on the caseback.

Featuring most of the same details as the Scout, the Clifton Club Indian Legend Tribute Chief timepiece is aesthetically different with an opaline black dial and snailed silver-colored chronograph counters inspired by the Indian Chief cruiser’s livery. The Chief comes on a three-row polished and satin-finished stainless-steel bracelet secured with a triple-folding clasp. Both models are 44 mm, house a Valjoux 7750 movement, feature 48 hours of power reserve, and are limited to 1,901 pieces each.

The third timepiece, the Burt Munro Tribute Edition, celebrates the storied and legendary motorcycle racer, who rose to the top of New Zealand’s racing scene in the 20th century. In 1920, Munro purchased an Indian Scout that had a speed of up to 55 mph. Not fast enough for the speed demon, Munro continually modified the bike for 55 years in his shed to increase its power while working as a motorcycle salesman to support his passion. Munro went on to set three world records on his beloved Indian Scout at Utah’s Bonneville Salt Flats races, culminating in his famous finish in 1967 when he set the 1000 cc class record at 184.087 mph, the result of boring out the engine of his Scout a further 30 cc. Munro was 68 years old and riding a 47-year-old machine when he set his last world record.

The timepiece features the famous Indian Red of Munro’s Scout on the seconds hand and strap. The second’s counter in yellow features his lucky number 35, and his world record is marked by a highlighted 184 on the tachymeter scale of the bezel. The dial has been sandblasted in silver to reflect the grainy texture of Utah’s salt flats, and the black horizontal line on the dial and strap are said to be inspired by the streamliner livery. Also, in 44 mm stainless steel and featuring the Valjoux 7750 movement, the Burt Munro Tribute Edition will be limited to—you guessed it—1,967 pieces.

All three Baume & Mercier Indian Tribute pieces retail for $3,900 and are available for purchase starting this month.