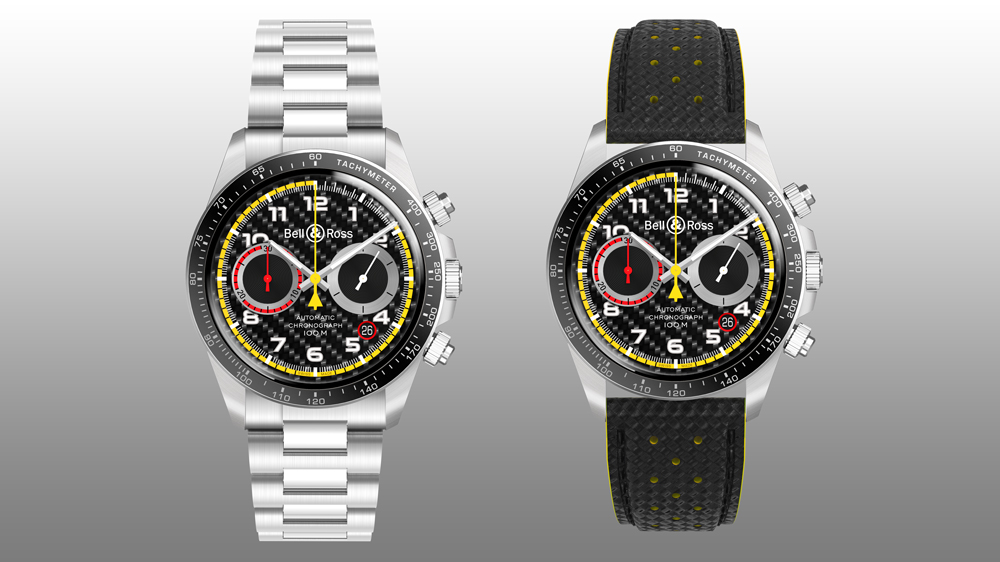 Last month, the French Grand Prix took place at the Circuit Paul Ricard in Le Castellet, France, marking the first time the Formula One race had been run in a decade, with British driver Lewis Hamilton taking the first-place position on the podium. As the official partner of the Renault Sport Formula One Team, with Nico Hülkenberg and Carlos Sainz behind the wheel as drivers, Bell & Ross created a special limited-edition BR V2-94 R.S.18 chronograph ($5,400) to celebrate the race. Only 999 timepieces of the new model will be available.

The handsome new sports watch updates Bell & Ross’ staple BR V2-94 model. This time, the 41 mm satin-finished steel case houses a carbon-fiber dial—a material used in car racing on the monocoque, suspension, wings, and engine cover. The small date window is encircled in red and sits just between four o’clock and five o’clock beneath the watch’s small seconds counter positioned at three o’clock. A 30-minute counter at nine o’clock features a red minutes track for legibility, while a yellow internal minute track mimics the colors of the Renault Formula One racing team, whose uniforms and cars are yellow with black accents.

The sapphire crystal caseback reveals the Swiss mechanical BR-CAL.310 chronograph caliber and bears a metallized rendering of the Renault car and its serial number. While the timepieces made for the Renault Sport Formula One Team were designed with a rubber strap featuring the blue, white, and red stripes of the French flag, commercial models are available on either a satin-polished steel or carbon-fiber calfskin strap. The new R.S.18 version of the BR V2-94 is Bell & Ross’ first presentation of a vintage model linked to its partnership with the Renault Sport Formula One Team—last year, the watchmaker introduced a far pricier Renault BR-X1 RS17 ($24,200) model limited to just 250 pieces and featuring the BR-Cal.313 movement, which is no longer available.