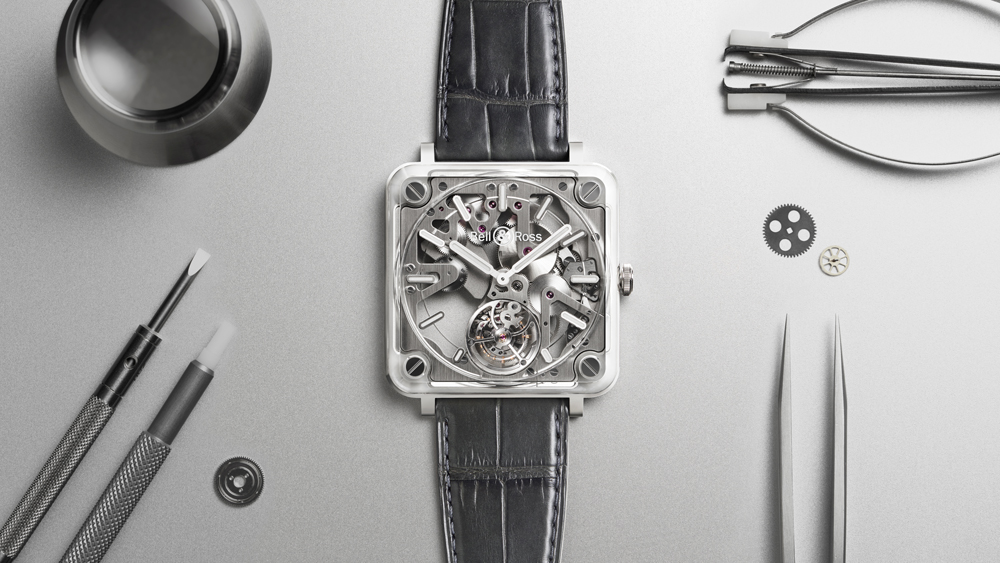 As vintage timepieces are increasingly in vogue, countless watch brands are reaching into their archives to dust off designs for 20th-century models, which they then attempt to reinvent for modern tastes. On the flip side, however, are watchmakers who are countering the retro trend with sci-fi-looking timepieces that push the luxury watch industry into the future.

The French brand Bell & Ross walks the line between both camps. Well-known for its Vintage collection of round wristwatches honoring 1960s-era aviation, the watchmaker’s new BR-X2 Skeleton Tourbillon Micro-Rotor fits squarely in the futuristic category.

Part of the brand’s four-year-old Experimental collection, the skeletonized timepiece is a feat of micro-mechanical transparency. Like its second-generation predecessor, last year’s BR-X2 model, featuring a case and movement fused into a single element, the BR-X2 Skeleton Tourbillon was designed “to make the case disappear, leaving just the movement visible,” says creative director Bruno Belamich.

At once technical and elegant, the model comes in the brand’s signature square case, measuring 42.5 mm in satin-polished steel. In order to fit inside Bell & Ross’s iconic shape, the watch boasts a square movement made in collaboration with Geneva-based MHC (Manufacture Hautes Complications).

Manufacture caliber BR-CAL.381 is placed between two sapphire crystal plates, which are linked by a narrow band of steel machined as a single piece, so the sapphire crystals serve as both the bezel and the caseback.

The end result is that the case and dial recede from view, pushing the skeletonized movement and all its expertly finished components to the fore. Fans of slender timepieces will be pleased with the extra-thin movement, whose profile measures just 4.05 mm high. A flying tourbillon at six o’clock rounds out the look of the two-hand watch display.

Available in a limited-edition of 50 pieces, the BR-X2 Skeleton Tourbillon Micro-Rotor retails for $79,000.