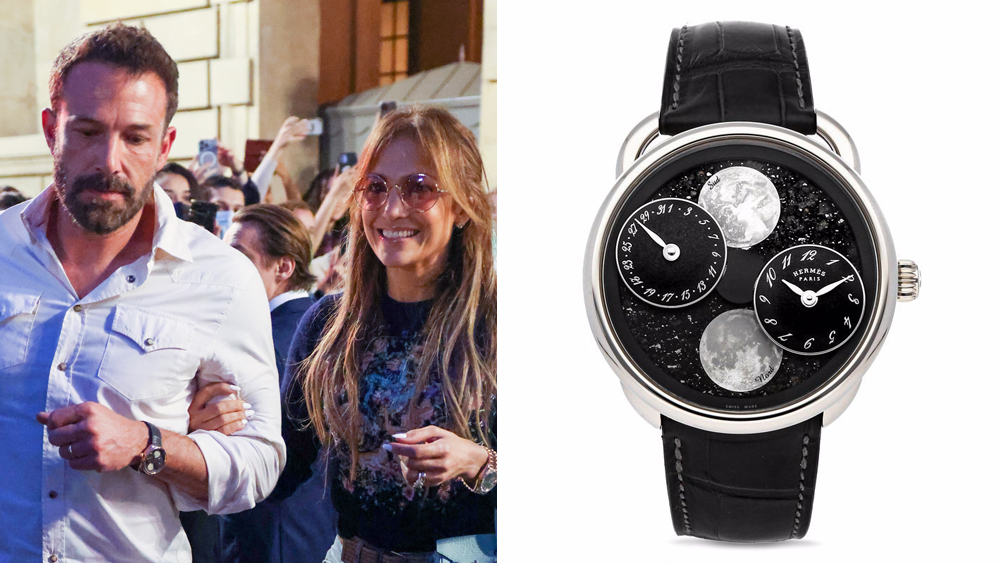 Her impact may be hard to spot at first, but just look at the Hermès watch the actor was photographed wearing while the couple was in Paris for their honeymoon last week. It’s the sort of dazzling timepiece you expect to see on the wrist of one of Hollywood’s leading men, but it’s also completely at odds with everything else the actor wears on a regular basis.

Unless he’s got a movie to promote, one of the last things Affleck seems interested in doing away from the set is dressing up. For much of the last decade, there’s really only one word that can be used to describe the actor’s closet of nondescript button-downs and flat-front trousers: casual. That also happens to be the one word no one would ever associate with the Arceau L’Heure de la Lune.

That’s because the timepiece is easily one of the most elegant new dress watches of the century so far. Based on the photos of Affleck and Lopez, it looks like he’s wearing the black meteorite dial version of the watch that was released earlier this year. Instead of hands and hour markers, it displays the time via two ornate discs—one for the month, the other for the date—that rotate around a dial set with two mother-of-pearl moons. The space-like dial is housed in a 43mm case hand-crafted from 18-karat white gold attached to a striking black alligator leather strap.

It’s definitely not the sort of timepiece you’d normally see paired with a denim western shirt, such as the one Affleck wore in Paris. Still, it’s a very welcome style upgrade for someone who is going to be spending a lot of his time arm-in-arm with one of the world’s most glamorous stars going forward.

Interested to see what the Arceau L’Heure de la Lune can do for your look? The watch is still available in Hermès boutiques in the US, but if your local store doesn’t have one you may have to turn to the secondary market. Farfetch currently has a pre-owned example up for sale, just be prepared to spend $69,950 to get your hands on it.