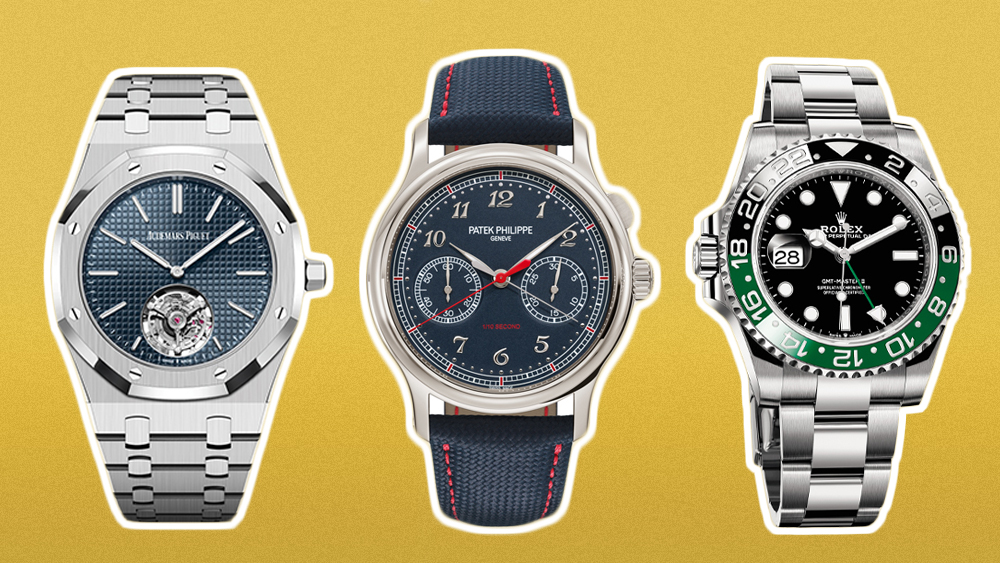 The upper level of today’s watch market is driven by collectors, and their increasingly high standards have led brands to unleash a steady stream of limited editions that exceed our expectations—technically, aesthetically and even symbolically: If the model once went to space, was favored by a celebrity, is double signed, or represents the last of its reference, it’s all the more covetable.

Limited in number, but not in price, every new introduction seems worthy of alerting your financial advisor about incoming damage. The question is, how many are truly collectible—not just great watches but also solid investments? Plenty of this year’s new releases are potentially investment-worthy, especially from the hot names among the independents, but model by model, it’s difficult to predict what will take off and what won’t. If it’s safe bets you’re after, it’s best to stick to the top of the heap, so our list of the most collectible watches of 2022, so far, is limited to debuts from the Holy Trinity: Patek Philippe, Rolex and Audemars Piguet. Here are two models from each that we think will rise to the top.

The Rolex Air-King is not the Daytona, or the Submariner or even, for that matter, the Explorer, but hear us out. On the surface, it’s a simple, affordable ($7,400), stainless steel sports watch, but so was the Patek Philippe Nautilus at one time—for decades, in fact—until it wasn’t. Could the Air-King be the next cultish outlier, the dark horse of the stainless steel sports watch parade? The new Ref. 126900 that replaces the 2016 version is still the same 40mm size with Oyster bracelet, black dial and green lettering, but the case was redesigned to include straight sides and lugs. More notably, it now has crown guards, which puts the Air King in the brand’s Professional watches category, even though it’s the only one that combines crown guards with a polished, non-indexed bezel. Probably the next most noticeable difference is that there is now a 0 before the 5 on the minutes scale, so each five-minute interval is now marked by two digits, something that will easily distinguish the 126900 from pre-2022 models. Also, the applied numerals, hands and triangular hour marker are now filled with Chromalight, Rolex’s proprietary lume. It contains the Rolex caliber 3230, a COSC-certified Superlative Chronometer. At retail, it is priced at $7,400 and so far going for around $11,000 on the secondary market.

The great novelty of the new GMT-Master II is the position of the crown and cyclops date window on the left. A watch for lefties is unusual for Rolex and in the watch world in general and rarity is a prime factor in collectible watches. Collectors call it the “destro,” which translates to “right” in Italian, as in watches to be worn on the right wrist. It could, however, be worn on the left hand, with the crown simply facing the other way, where it doesn’t pinch the crease where you bend your wrist. The green and black bezel are exclusive to this line, and it’s worth noting that two-tone Cerachrom itself is rare—Rolex introduced its proprietary ceramic formula in two tones only in 2013, and it is only used on certain sports models. The green bezel on this model is the same as that on the Submariner Date. Flipping the crown also meant flipping the cyclops window from 3 o’clock to 9 o’clock, which looks wonderfully odd and eccentric. There is the option of either a Jubilee or Oyster bracelet. The retail price is $10,050 and it is currently selling in the $30,000 to $40,000 range on the pre-owned market.

The Royal Oak is not just one model, but hundreds of models produced over five decades in various metals, complications and limited editions. The back catalog stretches into the horizon. This year is the model’s 50th anniversary, and Audemars Piguet dropped a jubilee model that would have been a collector’s piece even without the anniversary-themed rotor. The new Royal Oak “Jumbo,” Ref. 16202 replaces the 15202, the reigning Jumbo since 2000 and the purest expression of the iconic design, with time and date only. The 16202 has a new movement, the caliber 7121, replacing the 2121, which had been used in the Jumbo since it was launched in 1972. Both are ultra-thin, but the 7121 is equipped with design changes including a repositioning of the logo from 12 o’clock to 6 and a new double-hash index at 12. Otherwise, it is the same classic design that collectors know and love. If it’s not broke, don’t fix it. There are four references: steel ($33,200), pink gold and yellow gold (both $70,500) and platinum (price upon request). The steel model is selling in the $150,000 plus range on the pre-owned market—as is, it must be noted, its predecessor, the 15202.

What’s a 50th-anniversary collection without a virtuoso showpiece?  The RD#3 (RD stands for Research and Development) is a virtuoso edition of an icon that retains its purity of design, a very difficult combination to achieve. It looks a lot like the new 16202 Jumbo, but without the date, and with the edition of a flying tourbillon. It is pure Royal Oak, with the Bleu Nuit tapisserie dial, baignoire markers and hands and an eight-sided bezel with screws. The dial is pared-down pure, with no date window, no “automatic” under the brand name at 12 o’clock, and no logo at 6 o’clock. And it’s thin at 39 mm by 8.1 mm. Not quite as thin as record-holder Bulgari’s BVL 288, but also not as wide, and instead of a peripheral rotor, it has a full central rotor. It’s worth noting that before the RO stole the spotlight, Audemars Piguet was known for complications and slim watches. It sports a full-rotor flying tourbillon, which seems like an all-around impressive representation of the brand at its best. The 50th Anniversary rotor makes this hard to beat as a collector’s piece. The price is upon request and it is limited in production, which means it will be harder to come by than the already difficult to obtain Royal Oaks. The model has been quoted at CHF 157,500 ($165,726 at the current exchange) on several watch news sites. It hasn’t popped up on the pre-owned market yet, but one reseller is offering a previous steel 41mm Royal Oak flying tourbillon with a different caliber and different dial for about $325,000.

The Patek Philippe Ref. 5470 ticks all the boxes of elements that make a watch collectible right now—ultra-thin design, high-frequency escapement, a steel sports watch design and a manual-wound chronograph. The 5470 has it all, and then some. The movement, CH 29-535 PS, was 10 years in development, with 31 patents, seven of which are new. The primary technical feat is the display of 1/10th second on the central dial simultaneously with a regular one-minute central chronograph seconds hand. It incorporates two separate chronograph mechanisms, one driving the central chronograph seconds (white), and the other (sporty red) 1/10th seconds hand, which travels five times faster around the dial, once every 12 seconds. Because two chronographs use ample energy, the movement was highly optimized, with a Nivaflex mainspring that adds barrel torque without adding thickness; a 1/10th second hand made of Silinvar, which requires 3.35 times less energy to operate than steel; and a salad of silicon components in the escapement, which equips it to handle the friction of high frequency. Though not a special edition, like all Patek complications, it will be limited in production. The official price is “upon request,” and some secondary sellers are equally cagey, also listing “price upon request.” One watch news site lists CHF 380,000 (about $399,847) as a retail price. Otherwise, the 5470 seems nonexistent so far on the pre-owned market.

Salmon is a rare species in the watch world. It’s exotic and unusual—a handful of brands have used it for special editions only, a convention that dates back to the 1930s and ’40s when it first emerged. The color pops, but unlike a bright orange or a bold red it’s more neutral, sophisticated and muted. It is still used very rarely, and is therefore highly collectible. It is not an exaggeration to say this dial type can fetch a premium of anywhere from 50 percent or double, or even sky’s-the-limit prices, depending on the brand and the model. Some salmon dials are one-of-a-kind, created on special order by clients. Rock star Eric Clapton, for example, ordered salmon versions of Ref. 3970, 5004 and 5970 from Patek Philippe. The Ref. 3970, made in 2008 sold for just under $800,000 at Sotheby’s a couple of years ago. A version of Patek’s legendary Ref. 1518 with a salmon dial sold by Phillips in 2020 for just over $3 million, and a rare “pink on pink” Ref. 1518 in pink gold with a salmon dial sold at Sotheby’s last year for $9.5 million. Any Ref. 1518 will fetch a high price, of course, but a salmon dialed version is in another stratosphere. The Ref. 5172G, first introduced in 2019, now comes with a salmon dial. Aside from its pretty color, it’s a great watch with pump pushers, dual subdials, syringe hands, the absence of a date window (a must for purists) and a tachymeter scale that gives it a sporty touch and the manual-wind caliber CH 29-535 PS. If you’re connected enough to purchase one at retail for $80,431, consider this salmon dial a great catch.