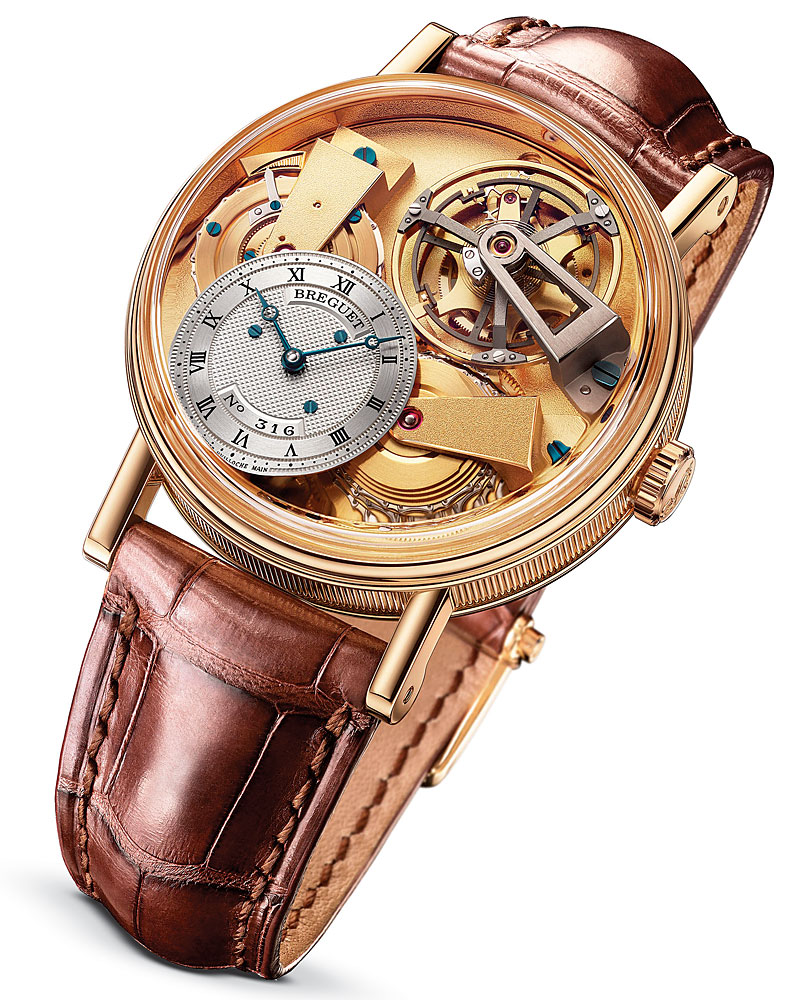 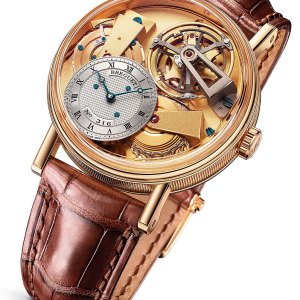 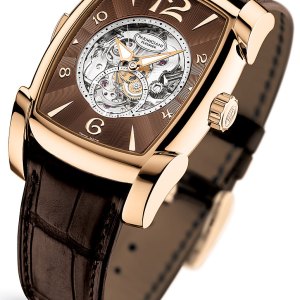 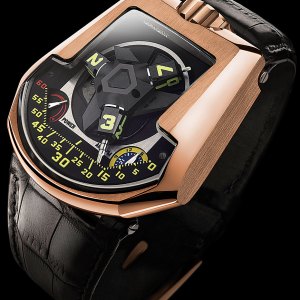 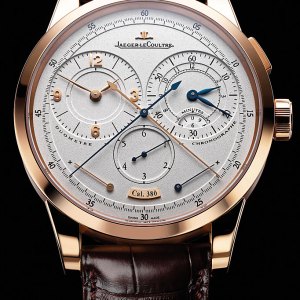 Since its launch, Breguet’s open-works La Tradition model has stood as a paean to the original mechanical style of Abraham-Louis Breguet—from its frosted finish to revisited constructions such as the parachute antishock device. The most recent Breguet La Tradition Tourbillon Fusee (212.288.4014, www.breguet.com), priced at $146,800, is the best possible sequel in this style of highly visual watchmaking because it combines two of the most flamboyant mechanisms in A.-L. Breguet’s repertoire: the tourbillon, the invention for which he is best known, and the chain and fusee. Breguet did not actually invent the latter, which is intended to compensate for the continuously declining power of the mainspring, but he used it in various pieces. The tiny chain, as it unwraps around a conical-shaped barrel, makes a fascinating if somewhat antiquarian display, and it is presented to full effect in La Tradition. These complications in this historically evocative style make the strongest connection yet between the modern Breguet and the old master.

The word harmonious might be a trite descriptor for a minute repeater; however, it can be applied fairly to the Parmigiani Fleurier Kalpa XL Minute Repeater (949.489.2885, www.parmigiani.ch), which is priced from $228,100 to $259,100. The term relates not only to the hammers and gongs that create the watch’s chime, but also to all other aspects of its execution. With a proprietary movement assembled and tuned by Parmigiani’s own watchmakers, this repeater has an edge in status over the musical watches that are reliant on the work of third-party specialty houses. The discreet open-works aperture inside the chapter ring lets you admire the movement’s hand-finishing—another of Parmigiani’s most compelling draw cards—without taking the watch off. In fact, it is clear from the design that Michel Parmigiani has taken pains to ensure that this kind of summit-class acquisition will reside on collectors’ wrists, rather than inside a safe. The distinguished and ergonomic Kalpa case, combined with rich dial tones, make this repeater one of the most fashionable high complications produced today, and one of the few repeaters that will draw comments before it even makes a sound.

Early last year, word that Urwerk’s watchmaker/designer duo of Felix Baumgartner and Martin Frei soon would release a new model stirred considerable speculation among aficionados. That watch, the Urwerk 201 (+41.22.900.20.27, www.urwerk.com), shares many characteristics with the brand’s previous works while exhibiting ample innovation. Priced from $135,000 to $188,000, the 201 is based on a massive overhaul of Urwerk’s satellite system, the odd-looking time display upon which Baumgartner and Frei made their reputation for producing unorthodox designs. The new system, with rotating cubes to mark the hours and a retractable finger to mark the minutes, seems to blend timekeeping with robotic technology. The combination of painstaking hand adjustment and a cutting-edge antifriction coating, which is required for the telescopic finger to function, exemplifies Urwerk’s take on watchmaking; the interpretations are modern, but even traditionalists take notice.

“The first time I saw the Duomètre à Chronographe working,” says Jaeger-LeCoultre’s CEO, Jérôme Lambert, “I thought I was really experiencing the full potential of the manufacture.” This is lofty praise indeed, even from an executive with commercial goals, but such a reaction also is typical among horological sticklers—people who object to even the minor drop in accuracy that modern chronographs experience when they are engaged. The Jaeger-LeCoultre Duomètre à Chronographe (212.308.2525, www.jaeger-le?coultre.com), priced from $37,600 to $59,400, avoids this problem by having two separate power trains (one for time and one for chronograph) side by side in the watch. The bifurcated dial, with time on the left and chronograph on the right, has color-coordinated hands that correspond to the numbers on their respective dials: The time dial’s indexes and hands are gold, and the chronograph’s are blued steel. The elegant Duomètre à Chronographe may be a rare example of breakthrough evolution in an already refined genre of timepiece.

Anyone who attended last year’s launch in Geneva of the HD3 Vulcania (www.hd3complication.com; available at Westime, 310.470.1388), a special tourbillon for the American market, saw only computer renderings of the timepiece and an enormous, but completely empty, watch case. When the final product debuted months later, after production problems at complicated-movement specialist BNB had been solved, it proved worth the wait. The $395,000 Vulcania, created by HD3 designer Fabrice Gonet, stands as evidence that design can usurp engineering as the premier watchmaking art. Even BNB’s impressive biaxial tourbillon is eclipsed by Gonet’s Nemoesque vision, which features a paddle-wheel hour indication, a sextantlike power-reserve display, and a minute hand that recalls a Chadburn telegraph, straight from the bridge of an old steamer.

According to Ewa Lederer, who operates the Blu watchmaking company with her husband, Bernhard, the idea for opening up the case of the Blu Majesty Tourbillon MT3 (+41.32. 843.6900, www.blu.ch) came to her in a dream. Dreams and mystery always have been the cornerstones of Blu’s designs, as is apparent in the company’s intriguing Planet models, but in this case, the epiphany is somewhat ironic. The $280,000 MT3 is the couple’s most successful effort thus far because instead of perpetrating a mystery, the case is open to full inspection. The dial and the case sides have been removed, leaving only a structure of pillars and transparent sapphire walls. It is now possible to view the mechanism that orbits the tourbillon cage around the circumference of the watch. You also can see Bernhard’s unusual half-flying tourbillon, a design that he adapted from German master Alfred Helwig. The arrangement, in which only a narrow balance cock supports the cage, is designed for efficiency, but these advantages are less noticeable than the tourbillon’s architectural qualities as it rises from a bed of meticulously finished plates and wheels.

Although it is not the first timepiece to have broken the monthlong power reserve barrier, the A. Lange & Söhne Lange 31 (800.408.8147, www?.alange-soehne.com) deserves high praise for the thought behind its movement. The 31-day power reserve comes from two stacked spring barrels, whose impressive diameter accounts for the 37.3-by-9.6-mm case. Although this arrangement is the most reliable way to achieve the ultralong power reserve, it posed some significant engineering problems. To wind the massive springs, A. Lange employed powerful gears that are driven by a key system; a remontoire device, sometimes used in tourbillons, ensures the consistent delivery of power as the springs unwind. This type of constant-force mechanism is a perfect engineering solution to the large mainsprings of the Lange 31 and their high power variation. Unfortunately, this long power reserve likely will require an equally long wait. The Lange 31 (price available upon request) may not be delivered until 2009.