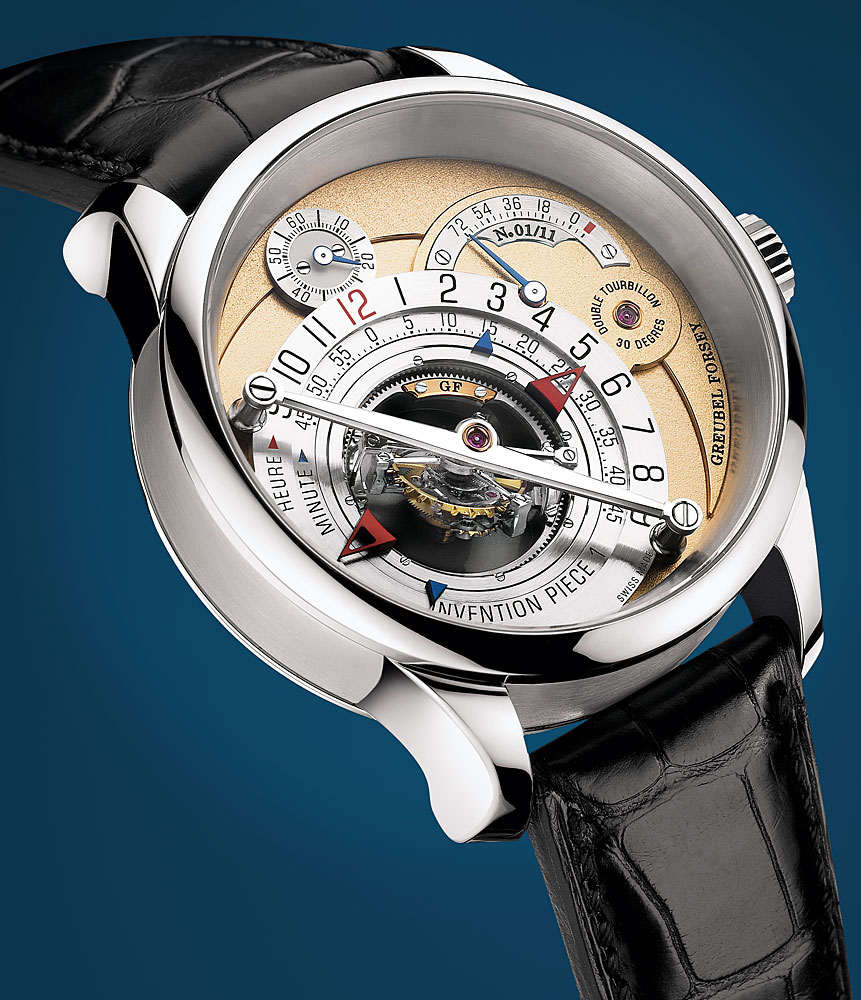 In 1999, watchmakers Robert Greubel and Stephen Forsey left Renaud et Papi with the vision of a new wristwatch tourbillon mechanism that would diminish the effects of gravity on accuracy. “We saw the need for mechanical complicated watches to evolve, and we wanted to look at what was done in the past and improve on that—to add something new to watchmaking,” says Forsey, a London-area native with a ruddy complexion, a deeply furrowed brow, and a penchant for vintage Bentleys. After four years of development, the duo unveiled the Double Tourbillon 30°, which features two tourbillon cages mounted at an angle to avoid extreme horizontal and vertical positions that can hinder a mechanical watch’s precision. Last year, they showcased their mechanical achievement in the $470,000 Greubel Forsey Invention Piece 1 (opposite page).

“We let ourselves go a little bit,” explains Forsey of the artistic design that places the Double Tourbillon 30° at the center of an offset time display consisting of two rings—one for minutes and one for hours. Two triangular indicators (blue for minutes and red for hours) indicate the passing time on two concentric semicircles. The inner tourbillon cage completes a full rotation in 60 seconds, while the outer cage makes a revolution in four minutes. “There are four different systems rotating,” points out Forsey. The dial is cut away around the tourbillon mechanism to provide a view of the concentric gearing that drives the hour and minute indicators. The movement consists of 388 parts, including 128 for the double cage that weighs a mere 1.17 grams.

Greubel Forsey will produce 11 pieces in each of three metal variations: white gold, red gold, and platinum. The dial’s deceptively simple-looking frosted finish, a Greubel Forsey design signature, sets off the different levels and offers evidence of exceptional hand-finishing. “One of the primary things that limits the number of watches we make is hand-finishing—the level of detail in each watch,” says Forsey. “Today, a third of the team exclusively works on hand-finishing. At the end of the day, finishing is more art.”

To explain this novel work of horological art, Greubel decided to engrave its story on the caseback. The hidden 200-word message, which explains the history of the Double Tourbillon 30°, cannot be photographed, so it is reserved for the eyes of the watch’s owner. “One aspect of my vision of watchmaking is to enter unknown territory, to push innovation further,” says Greubel. “I refuse to accept that everything exists already. We learned tradition, but we have a duty to add to that.”