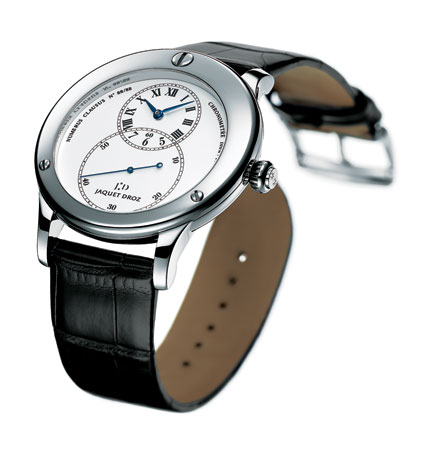 Patek Philippe’s original 5036 annual calendar was significant when introduced nine years ago, because it was a relatively simple complication that emulated the appearance of the far more complicated timepieces for which the brand is known. By contrast, the watchmaker now has employed a modified version of the same annual calendar mechanism for the Gondolo Calendario, Patek Philippe’s most streamlined and contemporary-looking timepiece in years.

Indeed, the stylish design of the Gondolo Calendario Ref. 5135 ($29,700 to $31,100) represents a departure for the conservative Geneva watch manufacturer. The tonneau shape ostensibly fits the Art Deco profile of Patek Philippe’s Gondolo series, but the rounded and bold lines lend it a modern rather than a retro appearance. With a width that is slightly more than 40 millimeters, the watch also has dimensions that are unmistakably 21st-century. “We were looking for a design that would be more visible to people outside our community of collectors,” says Hank Edelman, president of Patek Philippe USA. “It is definitely one of the most youthful pieces we’ve ever done.”

While it may be intended to attract a new audience for Patek, the Gondolo Calendario also offers sufficient technical advancements to whet the appetites of hard-core Patek Philippe collectors. Instead of displaying moving hands, the watch has a gear-driven calendar mechanism that rotates date cards, which are revealed in apertures around the dial’s periphery. The automatic base caliber also has been enhanced by Patek Philippe’s modified Gyromax balance wheel, enabling it to run at a higher frequency (28,800 vibrations per hour) for improved accuracy. Even the profiles of the gear teeth have been reshaped so that the power transmission is steadier, which also elevates the watch’s precision.

Ultimately, the Gondolo Calendario manages to balance the brand’s technical pedigree with a fashionable look. Patek Philippe’s designers seldom aim beyond the brand’s established design parameters, but when they do, they hit the mark.

When Manuel Emch, managing director of the recently revived watch brand Jaquet Droz, purchased an original Jaquet Droz pocket watch with a curious dial configuration at auction three years ago, he had no idea how significant the acquisition would become. That particular watch served as the archetype for the entire brand, and its reinterpretation as the Jaquet Droz Grande Seconde Marine ($17,900) stands as one of the most elegant gentlemen’s wristwatches on the market today.

Like many of the brand’s special models, the white gold, white-dialed Marine is limited to 88 pieces. The sturdy 43 mm construction recalls the marine chronometers of the 18th and 19th centuries, but with unusual twists such as the off-center case design and irregularly sized case screws. With its classic enamel dial, the Marine closely resembles the original pocket watch acquired by Emch, which turned out to be a most inspiring and versatile antique.

Fans of modern design usually regard skeleton watches as moribund. Cartier’s Tank Louis Cartier Squelette ($27,800), however, has revived the old bones. Most traditional skeleton specialists transform the watch movement into a fanciful engraved latticework. Cartier instead built something more modernist than lacy, and the pattern perfectly suits the Art Deco character of the famous Tank case. In another departure from traditional skeletons, the Tank’s decorative cuts are made into the movement’s baseplate, giving it a cleaner appearance with a pattern that flows functionally around key parts including the winding barrel and jewel seats. This sharp and visually fascinating dress watch may inspire even modernists to reexamine the skeletons.

Chopard finally has endowed a men’s watch with as much personality as its famously whimsical women’s models. Compared to the company’s more muted offerings for men, the Chopard LUC 4R Quattro Régulateur ($32,300) flaunts its technical character. Few dial formats are more flamboyant than that of a regulator, with its separately positioned hour and minute hands. Although this arrangement was devised for more precise timekeeping in antique clocks, it is now used mostly for aesthetic purposes. The Quattro Régulateur’s other displays, including a GMT and power reserve, speak to the movement’s more useful qualities, such as the nine days of running time delivered through the movement’s four winding barrels. Practicalities aside, Chopard has given the Régulateur flash to match its format. Sunburst guilloche engraving, high-contrast colors, and bold, stylized numerals make this the most eye-catching men’s piece Chopard has ever built.