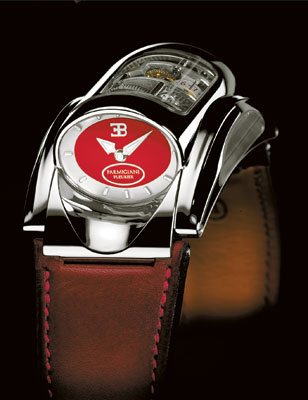 By the time Jaeger-LeCoultre unveiled its Gyrotourbillon ($310,000) last spring, at least three other makers already had developed multiaxis tourbillons, the captivating, revolving interpretation of Abraham-Louis Breguet’s original tourbillon concept. For its panache, however, the Gyrotourbillon stands above the others.

Watchmaking credentials are not required to recognize that something unusual is occurring as the spherical cage gyrates in multiple directions, with an inner axis spinning at the relatively dizzying velocity of 2.5 revolutions per minute while the outer cage completes the standard one revolution per minute. By increasing the mechanism’s speed, Jaeger-LeCoultre has taken the function of the tourbillon (which is to reduce gravity’s effect on the escapement by constantly changing its position, thus enhancing the watch’s accuracy) and transformed it into theater.

The Gyrotourbillon’s idiosyncratic chief architect, Jaeger-LeCoultre’s Eric Coudray, did not stop with the rotating tourbillon mechanism. He went two steps beyond by endowing the watch with a newly engineered double-retrograde perpetual calendar function and a running equation of time—either of which on its own would have been a unique and compelling feature. The combination of the three exotic complications amounts to a feast for those able to acquire one of the 75 Gyrotourbillons that Jaeger-LeCoultre will produce.

After waiting three long years, worshippers of the unconventional finally have been rewarded with the release of Parmigiani’s Bugatti Type 370 ($234,000). Loaded with new mechanisms, some practical and some merely cool, the Bugatti demonstrates that Michel Parmigiani’s imagination exceeds the mechanical conventions of the last 200 years. Only Parmigiani could conceive a movement that breaks from the usual disc format and is stretched along a column or a separate winding apparatus that charges a 10-day power reserve in just three seconds.

The odd-looking watch sits transversely across the wrist with the dial positioned at one end for readability while driving. Other auto-inspired design elements include the Bugatti-styled gearwheels and U-joint couplings, and even a spherical differential. Hardly utilitarian, the Bugatti Type 370 is a monument to the creative possibilities that still exist for mechanical watchmaking, which is reason enough for wanting one.

Richard Mille’s high-performance ethos is the font of his watches’ flamboyance as well as their substance. Both are on display in the Richard Mille RM004 split-seconds chronograph ($135,000 to $139,000).

More than an exercise in aesthetics, the RM004 reflects the considerable effort Mille invested in chronograph performance research in conjunction with Audemars Piguet/Renaud et Papi. Virtually every mechanical detail—from the curve of the balance spring to the shape of the gear teeth—has been rethought to improve function. Low-inertia titanium wheels and a redesigned low-friction split-seconds assembly, for example, prevent the seconds hand from jumping. Such technical advances, along with the modern shapes of the black PVD-coated movement components, make it clear that this is no conventional timepiece: This watch looks as though it could run laps on a track. And yes, it also measures time very well.

Vacheron Constantin’s design portfolio always has displayed one or two wild hairs, especially for a traditional Geneva watch manufacturer. This year, another one sprouted—a collection of eight timepieces, each with an enamel-painted dial that is dedicated to one of history’s great explorers.

The Vacheron Constantin Patrimony Grand Explorers series ($68,000 each) follows a company tradition of combining bizarre time displays with traditional Geneva métiers d’art—in this case, the handpainted enamel maps on the dials that must be oven-fired multiple times. The Patrimony Grand Explorers backcross modern horological ingenuity with these artistic traditions. To indicate the time, a concealed mechanism “floats” a stylized numeral representing the hour across an arc along the bottom of the split-level dial that depicts the minutes. When one hour numeral disappears under the top portion of the dial, the next emerges from the other side. The mechanism involved actually is deceptively simple, but that does not detract from the charm of the display or the challenge of creating a bi-level enamel painting.