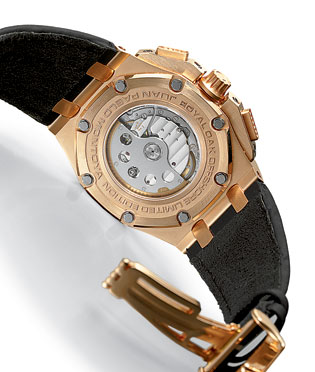 Automotive racing–themed chronographs certainly are not a rarity, but none captures the essence of the sport as well as Audemars Piguet’s Royal Oak Offshore Juan Pablo Montoya ($19,500 to $64,900), which is limited to 1,600 pieces in titanium, rose gold, and platinum.

Montoya, a Formula One driver, provided extensive input throughout the design process, and his influence is evident, particularly in the prominent use of carbon fiber on the bezel and pushers. Complementing the material’s dramatic visual effect are bezel screws that emulate engine bolts and a clutch-shaped rotor that is visible through the watch’s transparent caseback. The strap’s rectangular-patterned stitching is a detail taken from Montoya’s racing suit, and its alcantara lining is made from the same microfiber material that covers the steering wheel in the driver’s Formula One car.

These modifications further enhance the appeal of the already popular Royal Oak Offshore, a design that seems more relevant in this age of burly watches than when it was first released in 1993. With its slick carbon fiber accents, the smart-looking Montoya is sure to move fast.

Of the countless makers of diving watches, only IWC has remembered that what goes down must eventually come up. The Aquatimer Split Minute Chronograph ($9,300 to $10,300) has been designed specifically to measure a controlled ascent accurately, a necessity during a serious dive. IWC’s solution is an independently operated flyback minute hand, which, when compared to the running minute hand, indicates the correct time for decompression stops. IWC consulted professional divers while developing this function, which is activated by a large toggle that you can manipulate easily, even while wearing a neoprene glove. The split-minute mechanism is fully functional to the 120-meter depth for which this 44-millimeter titanium watch is rated. A multitude of diving watches look good underwater, but now divers have one that improves their chances of making it back onboard.

Harry Winston deserves credit for not taking the easy route when it set out to add a sports watch to its sophisticated lineup. Instead of producing a typical titanium chronograph, Winston launched a far more ambitious venture and created its Harry Winston Project Z1 ($19,100).

The Project Z1’s case is constructed from a superhard and lightweight metal alloy that Winston calls Zalium in reference to its major component, zirconium, a material rarely employed outside of the aerospace industry. Because of the metal’s extreme density and the flammability of its dust, the case cannot be stamped. Instead, it has to be sculpted laboriously and carefully from the ingot. Inside the case is a chronograph mechanism with a triple-retrograde module designed by independent watchmaker Jean-Marc Wiedderecht, a relative unknown who developed Winston’s signature retrograde ExCenter movements. For the Z1 movement, Wiedderecht specially engineered the gear-train toothing for heightened precision.

Massive and broodingly dark, the Z1 breaks away from the refined styling that characterizes most Harry Winston models. Nevertheless, the retrograde dial exhibits a familiar flavor for the staunch Winston aficionado. By blending brawn with beauty, the Z1 suits the tough guy who also happens to be a watch aesthete.

Not surprisingly, Roger Dubuis’ concept of a sports watch includes a healthy helping of bravado, an essential quality that other manufacturers often neglect. In keeping with the brand’s penchant for the extreme, Dubuis’ top-of-the-line diving watch, a timepiece that can withstand depths of almost 1,000 feet, features a flying tourbillon.

The Roger Dubuis EasyDiver Flying Tourbillon ($75,000) flaunts watchmaking’s most delicate and spectacular mechanism in an oversize cage that is visible through the dial. In true Dubuis fashion, everything about this watch is bold—from the massive 48-millimeter case to the raised numerals on the bezel. While some straight-laced watch devotees might deride the idea of a flying tourbillon sports watch, they certainly cannot fault Dubuis for a lack of nerve.