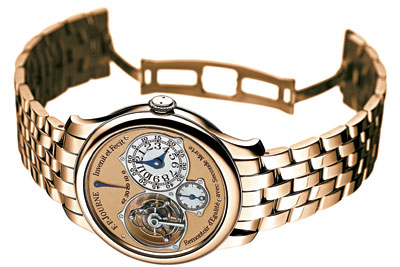 It is not easy to impress connoisseurs of complicated watches, but De Bethune has accomplished this feat in only a few years. The marque’s uncompromising quality standards and modern design sensibility are perhaps best exemplified by the De Bethune DB15 moonphase/perpetual calendar ($65,900), which is the company’s first watch to contain a movement developed in-house.

De Bethune’s design philosophy balances creativity and progressiveness with elegance. The DB15 is beautifully proportioned, with Roman numerals and guilloche patterns, but its bullet-shaped lugs and unusual spherical moon-phase display move the piece just beyond the confines of traditional watch aesthetics. The movement also defies established conventions. The upper plate sweeps rakishly between symmetrical winding barrels and spreads open around a most unusual balance assembly, with bullet-shaped weights instead of the standard wheel.

Such unorthodox configurations might be dismissed merely as examples of design exuberance, were it not for the reputation of Denis Flageollet, De Bethune’s technical managing director. Flageollet’s assiduous adherence to the highest quality of manufacturing techniques applies to all phases of the watch’s construction—from the use of palladium screws to employing antique rose engines to engrave the guilloche dials.

Despite all of the flashy, whirling complications made today, horological purists still prize pieces designed for the sole purpose of better timekeeping. This objective made F.P. Journe’s original Tourbillon Souverain a collector’s favorite, and it remains the only wristwatch to combine a tourbillon, which compensates for gravity-induced errors, with a remontoire, which regulates the fluctuating power of the mainspring as it reaches the escapement.

Journe, who has a long history with both mechanisms, recently augmented the limited series with his F.P. Journe Tourbillon Souverain à Remontoir d’Egalité avec Seconde Morte($96,200 in 18-karat gold and $99,800 in platinum)—also known as the “dead-beat seconds” model because its seconds hand ticks without hesitation. Working off of the remontoire spring, the dead-beat seconds is a relatively minor modification to what may be the signature complicated wristwatch by one of the craft’s true virtuosos.

Look through the sapphire caseback of the A. Lange & Söhne Lange Double Split ($99,800), and you will have some idea of just how complicated a split-seconds chronograph really is. However, the multilevel forest of wheels, levers, and plates actually hides a number of significant improvements that Lange has made on the sometimes underappreciated complication. Unlike conventional rattrapante (or split-seconds) chronographs that can record only those split times that are less than a minute, the Lange Double Split measures split times of as long as 30 minutes. Stop the split hand, and a special disengagement device prevents the hesitation that sometimes plagues lesser rattrapantes. With seven hands and the ability to time complex events with precision, the Lange Double Split is a must for obsessive/compulsive chronograph jockeys. But anyone with an eye for detail can appreciate the sublime architecture and finishing of the movement, which is a study in complex function in accordance with A. Lange & Söhne’s particularly German tradition.

The “equation of time,” which measures the variable difference between our system of 24 hours in a day and the sun’s actual progress across the sky (solar time), was among the most arcane and confusing complications ever to grace a wristwatch. But with an ingenious presentation, the Blancpain Equation Marchante ($127,700) makes this feature both understandable and fascinating. Blancpain dispenses with the obscure circular dial that typically is used to indicate this discrepancy and replaces it with a sun-tipped hand that either leads or trails the minute hand by as much as 16 minutes, depending on the time of year. This variation is related to the earth’s elliptical orbit around the sun, and so the watch’s mechanism is driven by a correspondingly elliptical cam, which Blancpain has adroitly exposed in a dial aperture. Also equipped with a perpetual calendar, the Equation Marchante enables you to understand fully the more convoluted aspects of our time system—an estimable quality in a complicated watch.