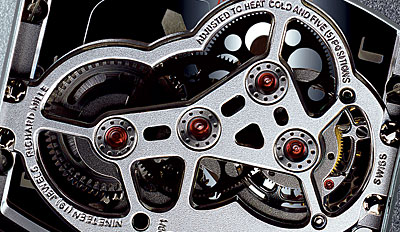 Richard Mille, the maverick watch designer who, with his industrial-looking complicated timepieces, triggered the wave of modernism that recently swept the watch industry, is now expanding our notion of precious metals. He claims that his latest high-performance tourbillon, the $349,000 RM 009, is the lightest mechanical watch ever made, which may seem a dubious distinction for those who associate the heft of gold or platinum with value. From Mille’s perspective, however, lightness is as much a performance-enhancing trait in watches as it is in automobiles.

Mille’s principle of utilizing the most efficient materials available demanded that he look beyond titanium, which other Swiss companies sometimes use for specialty models, to Alusic, an exotic alloy of aluminum and silicon that he had worked with while employed in the auto racing and aerospace industries. Lighter than titanium and much harder than aluminum, the alloy is better suited than either for use in a watch case, but it is extremely difficult to work with and very expensive. Alusic requires centrifugal casting and laborious milling operations—which make manufacturing techniques with conventional precious metals seem rudimentary in comparison. These processes do, however, produce a watch that weighs a mere 28 grams (just shy of one ounce).

Aside from its light touch on the scale, the RM 009 is perhaps Richard Mille’s cleanest-looking watch, with a cutaway baseplate, drilled wheels, and uncoated parts that clearly display his imaginative take on watch design. Several years into the modernist movement he helped start, Mille remains at its forefront.