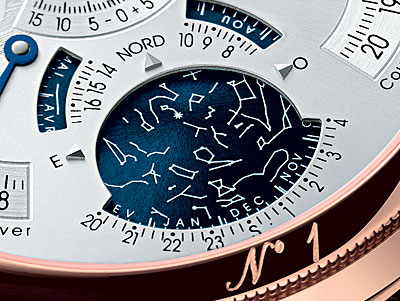 Bernhard Guillaume-Gentil, chief architect of Vacheron Constantin’s Tour de l’Ile wristwatch, may have felt some additional pressure to complete his magnum opus before the company’s impending 250th anniversary. Having been diagnosed with cancer, Guillaume-Gentil considered the challenge to create the world’s most complicated wristwatch an opportunity to leave an enduring legacy. He succeeded in accomplishing this, regardless of how soon another company devises an even more complicated piece. (A contender for that title already has surfaced from Jaeger-LeCoultre.) The $1.5 million Tour de l’Ile, with its 16 complications and 843 parts, will remain the consummate statement of Vacheron Constantin’s watchmaking prowess.

In accordance with the brand’s reputation for elegant design, Vacheron Constantin expended considerable energy on the piece’s aesthetics, giving it harmonious proportions, balanced displays on both sides of the dial, and custom guilloche on each of the seven pieces slated for production. Unlike other summit-class timepieces, this watch does not have an overwhelmingly complex dial; you can read it easily.

Mechanically, the Tour de l’Ile is not a typical grand complication either. The watch, which has no chronograph functions, offers an abbreviated musical strike of quarters and minutes without the hours. In the space saved by these omissions, Vacheron Constantin placed a full range of celestial functions, including an equation of time, sunrise and sunset times, and a star display. Such complications are Guillaume-Gentil’s signature. Fortunately, the master watchmaker’s health has been improving—no doubt buoyed by his role in fashioning a significant piece of horological history.