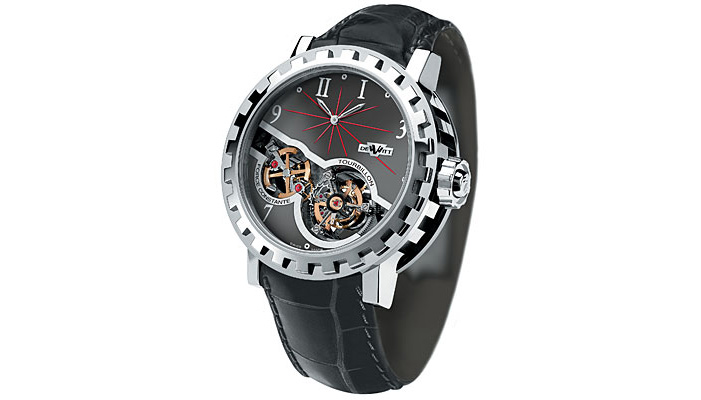 Harry Winston Rare Timepieces (800.988.4110, www.harrywinston.com), an 18-year-old company, may lack the heritage and movement-making capability of its rivals, but it continually enlists the best specialists in Switzerland and pairs their mechanical expertise with stunning design. This aptitude is particularly evident in the third installment of the company’s Project Z, an automatic tourbillon developed by independent watchmaker Peter Speake-Marin. Like the rest of the series, it is housed in a robust Zalium case. The watch division’s founder (and Harvard-trained chemical engineer) Ronald Winston patented the Zalium alloy, which is used for turbine blades in the aerospace industry.

The dark and stealthy Project Z3 Tourbillon Sport ($76,300) is just one product of a number of fruitful Winston partnerships last year. A collaboration with musical watch specialist Christophe Claret yielded a classic-looking tourbillon/minute repeater with a Westminster chime, and independent watchmakers Robert Greubel and Stephen Forsey lent their multiple-axis tourbillon to the comparatively bizarre Opus 6.

Only two years ago, the most unconventional aspect of De Bethune’s (212.729.7152, www.debethune.ch) largely traditional collection was a three-dimensional spherical moonphase. Today, that model is the most classical piece the company makes. While you can attribute De Bethune’s creative nimbleness to its small size, the change in design direction has resulted primarily from president David Zanetta’s affinity for the work of technical director Denis Flageollet. Zanetta, who determines each watch’s external components, was spurred by Flageollet’s bullet-shaped balance weights, shieldlike movement bridges, and architectural-looking antishock balance bridges. Zanetta references Flageollet’s unconventional movement constructions on the surfaces of the company’s latest sport watches, Power and Beat, and he decorated the dials of the dressier Digitale and DBL with the Geneva Stripe, a finishing technique usually reserved for movements. Flageollet’s vision, which conjured a triple column-wheel chronograph movement for the new Maxichrono, gives De Bethune legitimacy among enthusiasts who demand genuine technical advances along with a provocative aesthetic.

Jorg Hysek does not appear to be particularly enamored with the Swiss watch establishment. Just two years after being forced out of the watch and pen company bearing his own name, Hysek is once again producing watches, under the name HD3 Complication (310.205.5555, www.hd3complication.com), his three-person company. HD3 designs the watches, but Hysek has relegated the other watchmaking tasks to outside suppliers, as if to defy the old guard that touts manufacture status. And one piece named Raptor commits the ultimate horological heresy: combining the tourbillon with a secondary quartz digital movement. Even if you are not partial to Hysek’s flashy style, you have to appreciate such a maverick in a notoriously stodgy herd.

The watch establishment normally pays little heed to newcomers, but Jérôme deWitt has drawn attention by building an innovative and cultivated collection in only four years. DeWitt’s (305.572.9812, www.dewitt.ch) Tourbillon Constant Force (from $197,000) showcases a configuration that maintains consistent power to the tourbillon escapement as the mainspring winds down. Collectors respect this technical achievement, which preserves accuracy, and just about anyone will enjoy seeing the device in action through the dial. Recently, DeWitt has been spending money to lure watchmakers from Patek Philippe and executives from Vacheron Constantin, and it vastly expanded its Vernier, Switzerland, factory, which may allow it to soon achieve manufacture status.