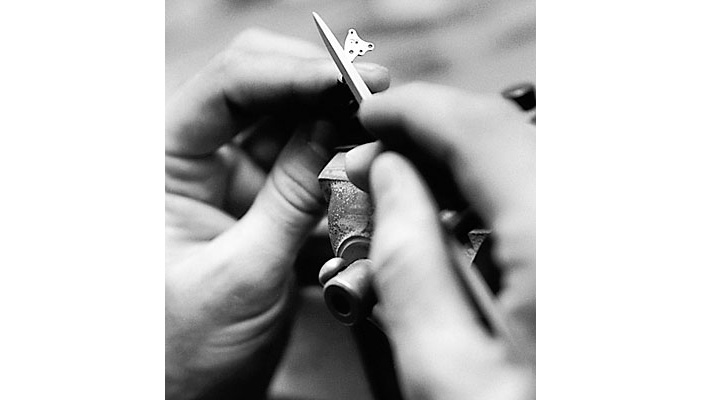 Octavio Garcia, senior designer at Audemars Piguet, summarizes the design directives he and his colleagues received for the company’s latest watches in two words: “blue sky,” meaning unlimited possibilities. Garcia and colleagues Philip Vaptzarof and Rebecca Yeager represent a new generation of designers at the company: young professionals with experience in watches, but also significant training in unrelated fields, such as industrial design. Atypically, Audemars Piguet’s designers contribute to every facet of a watch—from the exterior, which often displays thematic details, to the movement itself, which can be a sculptural art form as much as it is a display of mechanical ingenuity.

“When I arrived at Audemars Piguet three years ago, the atmosphere was pretty open,” recalls Garcia, who studied at the Art Center College of Design in Pasadena, Calif. “But when we began working with 3-D design programs, we had the ability to interface with the technical department like never before.” The 3-D design and imaging technology has enabled the designers to exchange files with the engineers and incorporate existing movement designs into their models.

Last year, this Vallée de Joux watchmaking bastion released an array of inventive watches. While many of the timepieces showcase the mechanical dexterity one would expect from a pillar of traditional watchmaking, what truly distinguishes them is their design, as exemplified by a pair of limited-edition complicated timepieces that anchor the new collection. The Millenary MC12 ($236,200) is a more fitting companion piece to its namesake Maserati sports car than is any other auto-themed watch. The case and dial of this tourbillon chronograph evoke the car’s body detailing, engine design, and color scheme, as do the shapes and colors of the movement’s plates and bridges. Similarly, the Tradition of Excellence Cabinet No. 5 ($320,300) is more than a vehicle for the company’s innovative energy-saving escapement. With its visible movement composed of clean rounded shapes and brushed metal surfaces, the piece also pays homage to mid-20th-century industrial designer Raymond Loewy, who conceived the streamlined S1 locomotive and the modern Coca-Cola bottle.

Such dramatic, progressive designs may seem surprising from a company that considers the traditional craft sacrosanct—and that had not presented a major design breakthrough in three and a half decades, since it introduced the Royal Oak sports watch. Yet, CEO Georges-Henri Meylan has spent the last few years instilling a more dynamic culture at the company without compromising its core watchmaking values. To this end, he has directed investments in facilities and personnel while challenging and empowering his design department.

Garcia and the other designers also have responded by reinvigorating Audemars Piguet’s existing models. A more aggressive-looking case profile and a flamboyant dial with elongated Roman and Arabic numerals, borrowed from an enamel watch in the company archives, have revitalized the once tepidly received oval Millenary (from $19,700). The Royal Oak Offshore Rubens Barrichello (from $23,800), with its auto-racing-oriented details sculpted out of ceramic and carbon fiber, also has emerged as a must-have limited edition.

Audemars Piguet has long been revered for its mechanisms, but its design department may be doing more to drive the brand forward. “I give our designers all the input I can,” says Francois-Henry Bennahmias, president of Audemars Piguet in the United States. “Then they tell a story with their design.”