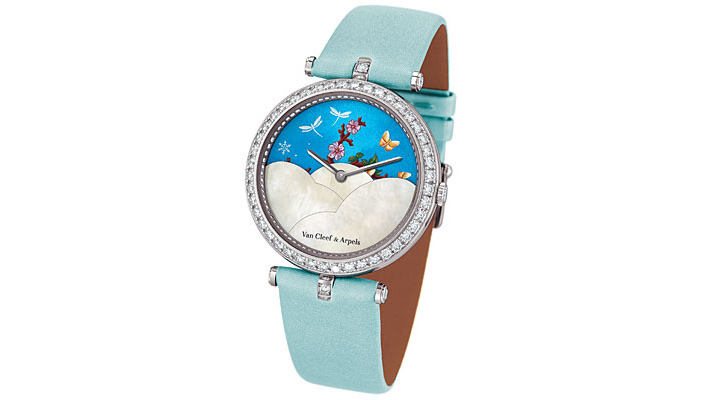 The Van Cleef & Arpels Centenary (800.822.5797, www.vancleef.com), a limited edition of 100 complicated pieces ($39,500) that marks the brand’s 100th anniversary, features an enamel-painted disk that makes a full revolution once a year. As the disk turns, seasonal scenes that are visible through the cutaway dial change. The company’s sister brand, Jaeger-LeCoultre, created the movement especially for the watches (all of which have been sold), and a Swiss enamelist painted the disks. The artist represents the seasons with abstract depictions of flowers, birds, autumnal foliage, and snowflakes.

The Cartier Enamel and Marquetry Collection (800.227.8437, www.cartier.com) continues the Paris jeweler’s long history of portraying animal motifs with pavé diamonds and enameling. These special editions ($51,400 to $77,800), available only at Cartier boutiques, employ cloisonné enamel as the collection’s unifying element. The artists compose images by using thin gold wire to separate different colors of vitreous enamel. For one piece depicting a panda, the artists convey the color white with pavé diamonds, which spill over from the dial onto the bezel and Pasha case. The collection also marks Cartier’s first use of marquetry in its timepieces. A dial emulating a tortoise’s shell consists of tiny slivers of contrasting-colored wood that have been pieced together. On a dial in a brawny Santos 100 case, artists employed marquetry, cloisonné enamel, engraving, and gem setting to depict a falcon.

Since acquiring Corum in 2000, watch magnate Severin Wunderman has exhibited his preference for edgy designs featuring skulls and the occasional demon. Each year he also commissions a few 50-piece collections that showcase handpainted enamel scenes of animals or mythical creatures. This year’s Corum Artisan Collection (949.788.6200, www.corumtimepieces.com) includes the Classical Dragons series ($39,000 to $43,000). For these watches, Corum’s artisans employed a new technique in which they carved layers into the mother-of-pearl dials to add depth and dimension to the paintings.