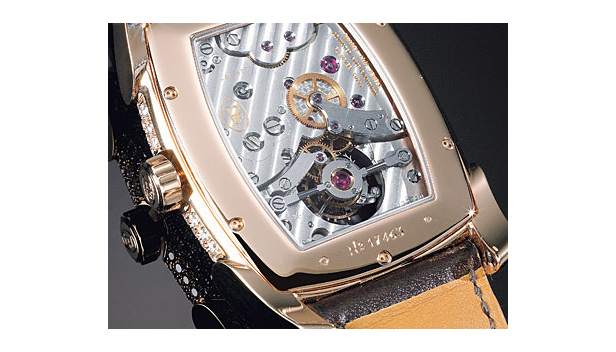 Who better to design a women’s watch collection than a woman? So concluded Jean-Marc Jacot, president of Parmigiani Fleurier, a brand known for its complicated men’s pieces. After Jacot assigned her the task of conceiving the collection, designer Carol Vallat adapted the company’s Kalpa men’s model, the brand’s most identifiable design, to appeal to women. Vallat enlarged and softened the shapes of the numerals, streamlined the case, and completely redesigned the bracelet. “The most interesting part of the Kalpa case is the prominent but gently curved lugs holding the bracelet,” she explains. “The lugs became the basic profile for the slim bracelet links.” Jacot and Vallat also gave the collection considerable breadth, creating three sizes: the dainty Piccola, the Donna, and the Grande, which approaches the proportions of the men’s Kalpa.

To further appeal to women, Parmigiani equipped the watch with a quartz movement. This decision was risky, acknowledges Jacot, because most collectors view such movements with disdain, and these purists could have regarded a quartz Parmigiani collection as a betrayal of the brand’s values. “The predicament was solved for us when we secured a supply of top-quality Patek Philippe quartz movements,” Jacot says. “But we also make an automatic version, which we expect will attract more women as they get to know the brand.”

Parmigiani’s women’s collection borrows from the brand’s popular Kalpa model in pieces that range from a complicated tourbillon  to simpler models powered by quartz movements.

Because its principal investor, the Sandoz Family Foundation, also owns a case maker and dial maker, among other specialty suppliers, Parmigiani can control the quality and production of those components. The dials of the women’s pieces feature appliqué numerals and sunburst guilloche engraving—an haute horlogerie hallmark—and the champagne and lavender colorings required extensive tinkering with translucent lacquers to perfect.

A complicated tourbillon ($228,000) and a perpetual calendar ($64,300 to $70,400) are the collection’s top-of-the-line pieces, and each displays a feminine touch from Vallat. She showcased the fast-moving 30-second tourbillon mechanism in a mother-of-pearl dial and pavéed the rose gold Kalpa case with diamonds. She softened the technical appearance of the perpetual calendar, which is housed in the brand’s round Toric case, by discreetly positioning the retrograde date, day, and month indicators around the perimeter of the watch. The elaborate dial highlights nature’s time markers with a large moon phase and diamond-set representations of constellations. “A man’s perpetual calendar is very technical,” says Vallat. “But for a woman, I chose to offer more of a metaphorical design that interprets the cycles of time.”