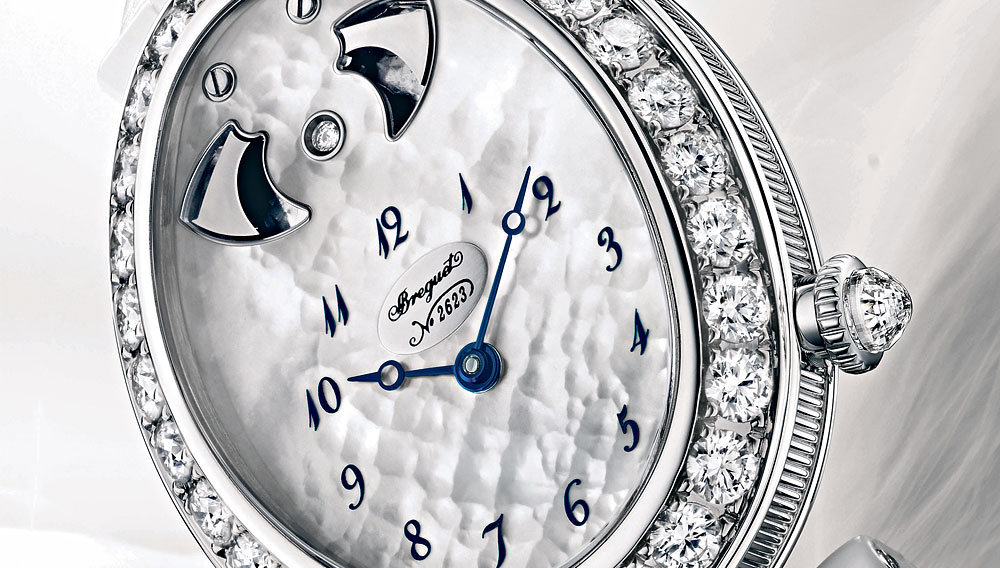 When Breguet sought to add a high-level complication to its successful Reine de Naples ladies’ watch model, its development team looked to the original watch made two centuries before. Commissioned in 1810, No. 2639—which Abraham-Louis Breguet personally delivered to Caroline Murat, Queen of Naples—was a most remarkable timepiece. The first and only wristwatch Breguet himself ever produced, this design sported a strap made of gold thread and twisted hair and incorporated a repeating function. Because the Breguet archives did not include any details on the exact nature of the mechanism, the company’s latter-day watchmakers gave themselves some latitude in creating a new design inspired by this historic piece. “We thought a simple sonnerie, as opposed to a grand sonnerie or minute repeater, would be the kind of mechanism Breguet would have put into such a watch,” says Rodolphe de Pierri, Breguet’s director of marketing and communication.

Developing the Reine de Naples Sonnerie au passage ($146,300), however, was no simple task. In the past, Breguet had made a number of watches that strike, including several minute repeaters and the Réveil du Tsar alarm watch, but a small, wristwatch-sized sonnerie that registers the hours as they pass was a new mechanism for the company. Moreover, the designers needed to deploy this movement in the Reine de Naples’ diminutive egg-shaped case. “The biggest difficulty was in creating sufficient loudness in a small case,” says Alain Zaugg from Breguet’s technical office. “To do this, we had to attach the resonating gongs directly to the largest surface in the watch, which is the upper crystal.”

The owner of Breguet’s latest Reine de Naples is able not only to hear the passing hours—each of which is registered by three strikes of the watch’s two gongs—but also to see them. The striking hammers are visible through apertures on the mother-of-pearl dial, and the automatic movement itself, which bears an engraved dove on its upper plates, is visible through the back of the case. A button with a discreet diamond marker activates or disables the striking function.