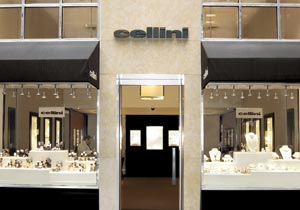 Instant gratification is not generally associated with buying an exceptional watch. If you are in the market for a high-end complicated timepiece or one of the latest top-of-the-line models, you can expect to wait for delivery. To address this common frustration, New York City’s Cellini carries nearly every model and metal combination offered by the select brands it sells. It also has a larger selection of more complicated watches than any other retailer; between Cellini’s two Manhattan locations, as many as 10 different tourbillons may be on hand, along with an assortment of perpetual calendars, minute repeaters, and even the occasional grand complication.

“The most sophisticated and demanding clientele comes through here,” says Leon Adams, Cellini’s president and proprietor. “If we don’t have what they want, they’ll simply go someplace else. We make it a point to step up to the plate to acquire the pieces our customers expect.”

“Cellini has the best luxury watch business in the United States,” says Ron Jackson, president of Tradema, which distributes Girard-Perregaux in the United States. “Not only do they present each brand in depth, they do it in an environment that is appropriate to the category.”

Unlike many specialty watch stores, Cellini does not carry a massive selection of brands at every price level. Rather, the inventory consists of only the very best, and this uncompromising quality complements Cellini’s high-jewelry offerings. In addition, the depth of Cellini’s watch assortment dangles the prospect of walking out the door with the watch of your choosing. That is a rare offering, indeed.

Far and away the most active auctioneer in the watch field, Antiquorum will conduct at least eight major watch auctions this year, its 30th anniversary. To celebrate its birthday, the company will auction commemorative watches by F.P. Journe, Vacheron Constantin, Parmigiani, and Jorg Hysek, in addition to a white-gold Calibre 89 from Patek Philippe, the most complicated watch ever built—a fittingly impressive tribute.

With its sleek new flagship boutique on 57th Street in New York City, Audemars Piguet makes a definitive statement about its brand from the moment you step through the glass facade etched with the schematics of a tourbillon movement.

The store’s sleek modernity and impressive range of product—including one-of-a-kind complicated pieces, high-jewelry watches, and jewelry—make a lasting impression, while conveying the brand’s prestige, technical expertise, and passion to those who are new to Audemars Piguet, or to watches for that matter. Plus, experienced devotees can take comfort that their questions will be answered by a staff that has been trained in Le Brassus.