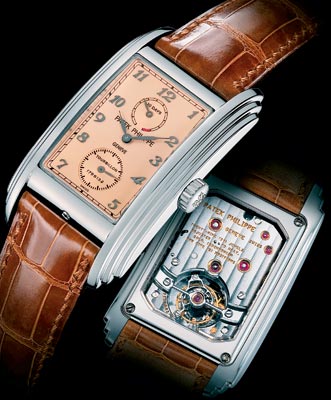 The spin doctor is in.

There is certainly no shortage of superlatives in the highest echelons of Swiss watchmaking. So what makes one piece stand above all others? Innovation is a pat answer, but in a field where the basic technology is more than two centuries old, the word assumes absurd overtones. The real reason fine mechanical watches continue to draw our interest and our discretionary dollars is their compelling tradition, and the most successful new models must pay proper homage. Patek Philippe’s Reference 5101P 10-Day Tourbillon (approximately $230,000) will be coveted not only for its features, but for the way it manifests the purist values that the company represents.

Of the unprecedented number of tourbillons released last year, the least ostentatious is the best. It will also be the most difficult to obtain. The Reference 5101P bucks the industry’s conventional wisdom that says watch collectors are drawn to the tourbillon complication because the technical look of the cage aperture screams, “Expensive!” To its credit, Patek Philippe has never subscribed to this concept; its new tourbillon, like its predecessors, sports a plain, closed dial, true to the notion that a real lady keeps her skirt down.

This tourbillon’s modesty is consistent with the company’s credo, which is to combine understated—yet abundantly evident—quality with innovation that never loses sight of utility. A tourbillon is, above all, intended to increase accuracy, and the design of the 5101P is heir to the company’s landmark tourbillon movements from the 1950s and ’60s, which dominated the accuracy competitions of that period.

Patek Philippe subjects each 5101P to a stringent precision standard (losing no more than a fraction of a second per day) before it is allowed to leave the workshop. The most daunting technical hurdle in creating the piece, however, was combining the tourbillon with the 10-day power reserve (which requires a double-barrel mainspring housing), all while retaining graceful wristwatch proportions. This feat necessitated some design alterations that produced a surprising concession: The 5101P is the first Patek Philippe tourbillon to permit the admiration, albeit discreet, of its rotating cage through a sapphire caseback.

While the watch will have no shortage of well-heeled admirers, it will require more than money to get your hands on one of the early deliveries. Because Patek Philippe is the leader in the complicated watch category, thanks in large measure to consistent technical achievements such as the 5101P, more collectors than ever are poised to snap up the handful of pieces that will trickle out of the factory this year. Competition for ownership promises to be intense, says Andrew Block, vice president at New York City’s Tourneau, which took delivery of the first 5101P to reach the United States. “The 10-Day Tourbillon was absolutely the most impressive piece that came out last year,” he says. “We had a very difficult time deciding which of our best customers would get the first one.” Gentlemen, start your machinations.

The Piaget Emperador Tourbillon ($91,000) sweeps the watchmaker into the complicated watch arena with a style that is surprising from a newcomer. A product of three years of development at Piaget’s Côte-aux-Fées movement workshops near Geneva, the Emperador Tourbillon was not constructed the easy way. Piaget selected the demanding flying tourbillon design, with its single support arbor, for aesthetic reasons, and constructed the rotating cage from lightweight titanium for enhanced performance. At a scant 10 millimeters thick, this is one of the thinnest tourbillons ever built.

“Most tourbillons tend to be bulky,” says Leon Adams, president of Cellini in New York. “But the most noticeable thing about Piaget’s Emperador is its elegant proportions and attractive design. Those are very important qualities in a watch at this level.”

The Ulysse Nardin Sonata ($43,800 in 18-karat rose gold) accomplishes a rare feat by adapting traditional watchmaking disciplines to the modern lifestyle, and doing so in an aesthetically pleasing way. For business people on the go, the Sonata offers a second time zone function with an alarm.

But what makes this watch outstanding is how Ulysse Nardin has made the piece beautiful as well as functional. The second time zone is advanced with the push of a button. The alarm can be set easily 12 or 24 hours in advance, and it sounds not with the shrill chirp of its peers, but with the sublime tone of a genuine minute-repeater gong. Ulysse Nardin has tailored one of the oldest and most rare elements of high horology to a contemporary and practical timepiece. The dial, with large date and easy-to-read subdials, has a compelling technical appearance. And the quality and ingenuity of the engineering inside demonstrate that Dr. Ludwig Oechslin and his technical team remain one of the most visionary forces in Switzerland.

Most people recognize the current appetite for oversize watches as a matter of fashion rather than function; even the complicated varieties usually contain a normal-size movement and lots of extra space. Then there was IWC’s Portuguese. It was not only the first fine oversize watch, it also housed a full-size pocket-watch movement.

Fittingly, the new IWC Portuguese Perpetual Calendar ($28,500) incorporates a range of features, including the perpetual calendar mechanism, for which IWC has earned its reputation. The Pellaton automatic winding system, a respectable seven-day power reserve, and a design that allows you to adjust the displays through the crown make this a superbly engineered complicated watch. Also, the large size of the movement’s balance wheel and moon-phase disk naturally improve accuracy. “The Portugese perpetual is a great-looking technical watch whether or not you’re into large watches,” says Rudy Albers, president and general manager of Wempe Jewelers in New York City. “Personally, though, I like the size, because it’s one of the easiest perpetuals to read.”

It is not uncommon for women to co-opt men’s watches, but the Breguet Classique Tourbillon ($77,500 to $88,500) is upsetting the natural order. The original intent of this watch, released last spring, was to combine the classic Breguet look with the classic Breguet complication in a size that would appeal to the small but growing number of female fans of complicated watches.

However, it seems that more than a few men have been attracted to this timepiece, despite the diminutive 36-millimeter dimension, diamond bezel, and hand-engraved mother-of-pearl dial. In fact, many men think this watch is one of the best formal dress pieces introduced in a long time. Aware that some men will be put off by the idea of purchasing a ladies’ timepiece, no matter how good it looks, Breguet has dubbed the model Tuxedo Tourbillon. We won’t tell.

Of all the limited-edition collectors’ timepieces unveiled this year, the most impressive is also the weirdest. Resembling the windows of a slot machine or even a domino, depending on your perspective, the Harry Winston Opus 3 ($62,000 to $98,000) may be the oddest timepiece to ever come out of Switzerland. This was to be expected when Harry Winston enlisted Vianney Halter for this project.

The independent watchmaker is a micromechanical genius, as evidenced by the movement’s 10 stacked and overlapping jumping display disks, and his designs are typically idiosyncratic. Opus 3 registers the hours, minutes, and date through a lattice of portholes that requires time for the uninitiated to decipher. As strange as it is, Opus 3 has an infectious quality, which, when coupled with the obvious brilliance and novelty of the movement, creates a limited edition that will be remembered long after it has sold out.

The watchmakers in the German town of Glashütte are fond of making technical statements—especially the kind that speak favorably of their abilities compared with those of the Swiss. The Glashütte Original Julius Assmann 3 ($110,000), a 25-piece limited edition flying tourbillon, declares itself an equal, if not a superior, example of the Swiss art of skeleton watchmaking. Named for a master 19th-century Glashütte watchmaker, the Julius Assmann 3 incorporates a noteworthy Glashütte invention: the delicate flying tourbillon, an appropriate choice for a skeleton model with minimal bridgework.

Like the two previous Assmann editions, this timepiece can be worn as either a pocket watch or on the wrist. “I don’t think anyone who purchases this watch intends to use it as a pocket watch,” says John Simonian, president of Westime in Los Angeles. “The real beauty of this piece is the delicate craftsmanship that is so readily apparent. This is also one of those companies you can trust to keep their production limits absolute.”

Acquiring the Chopard Mille Miglia Racing Colors set of chronographs may be the most fun watch purchase you can make this year. Chopard is a company with a sense of humor, and, as is required by the Mille Miglia race, it approaches each project with an abundance of spirit and little restraint. This set of five sequentially numbered chronographs ($18,250) in five (very bright) colors comes charmingly packaged in its own toolbox. The various colors, however, are not intended to help you accessorize; they correspond to the colors of the international teams that participate in the famous race. But if you can match a car to each watch, all the better.

One of the most intriguing attempts to create a contemporary timepiece for the 21st-century woman takes its cues from the Belle Epoque. The Vacheron Constantin Egérie collection ($8,000 to $43,000) gives only the briefest nod to modernity with baton hour markers and hands.

But the graceful extended tonneau shape, the numerals, the strap, and even the mechanical movement that powers many of the models are retro concepts lifted from pre–World War I drawing boards. Egérie is one of the most feminine and chic ladies’ watches that the company has produced in years, and Vacheron Constantin deserves kudos not only for resurrecting these elements, but also for interpreting them in such an appealing way.

It takes guts to depart from the traditional canon of complications, especially in a watch costing nearly half a million dollars. The Girard-Perregaux Opera Three ($475,000) is a testament to such nerve, with its internal music box—a complete departure from the watchmaker’s previous, more traditional Opera watches.

The musical mechanism inside Opera Three has a legacy all its own. Music box works, sharing much with watch mechanics, have frequently been adapted to pocket watches. But Girard-Perregaux’s scaled down wristwatch movement, which has the ability to play two different compositions (pieces by Mozart and Tchaikovsky), reaches an entirely new level of complexity.

Not everyone interested in purchasing such a costly timepiece necessarily knows a tourbillon from a minute repeater, but anyone can understand that the Opera Three is unlike anything else on the market.