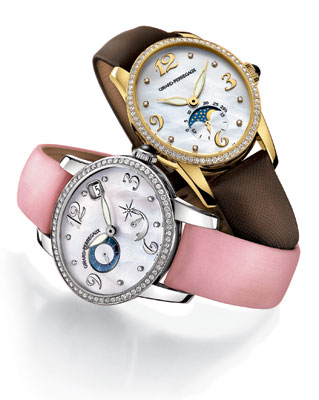 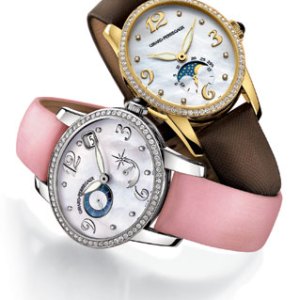 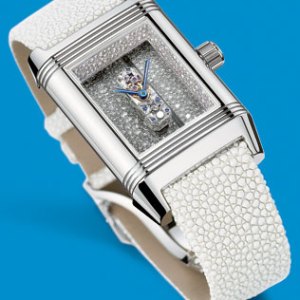 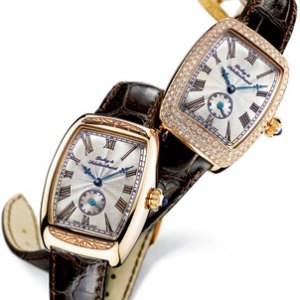 Producing a complicated mechanical watch for women requires a bit of audacity, and Cristina Thévenaz, creative director for DeLaneau, has plenty. DeLaneau’s Tourbillons ($150,000 to $400,000), released last spring in an initial series of 12 pieces, reflect equal measures of complicated watchmaking mastery and traditional Geneva métiers d’art. Specialist Christophe Claret developed Thévenaz’s concept of a feminine tourbillon movement, while the few Geneva artisans who possess the rare and necessary skills worked on the engraved and handpainted enamel dials. A subsequent tourbillon series is set with baguette diamonds—on the case and the baseplate of the movement, which is visible through the dial.

“Women appreciate certain complications just as much as men do when they are presented in the right way,” says Thévenaz. “They want a watch that has been created with every bit as much care as a man’s, and that includes what is inside the case.”

DeLaneau’s tourbillon movement is a focal point of the overall design. Touches such as a decorated baseplate and a wing-shaped tourbillon bridge, both specified by Thévenaz, impart an elegant, feminine sensibility to what usually is regarded as a man’s domain.

The tourbillon collection offers women an unprecedented chance to experience and appreciate the best of what a top-tier Swiss watch can represent—from complicated watchmaking to precision gem-setting to the arts of engraving and enameling. All of these disciplines are executed with unsurpassed quality, which may be surprising from such a small, relatively unknown company. As the industry discovers a growing number of women watch connoisseurs who are just as discerning as men, even the big brands are developing more complicated watches for women. Now they have an example to follow.

A watchmaker known for sturdy, classic, and often complicated men’s pieces surprised everyone last year by releasing a striking, elegant oval design for ladies. Girard-Perregaux’s Cat’s Eye ($13,500 to $19,500) is the strongest, most inherently feminine timepiece the company has ever produced. The oval shape works equally well when oriented horizontally with date, small seconds, and power reserve indicators, or vertically with a moonphase/seconds display. Aside from its shape, the Cat’s Eye upholds the company’s traditionalist philosophy for ladies’ watches. This mechanical collection mixes classical watch design elements such as appliqué Breguet-style numerals, intriguing subsidiary displays, and diamond accents. The Cat’s Eye is proof that time-honored Swiss design and 21st-century fashion are not mutually exclusive.

Jaeger-LeCoultre had explored just about every possible variation of its two iconic products from the 1930s: the famous Reverso case and its tiny Caliber 101 movement. Every variation, that is, except the one that combines the case and the movement. The Jaeger-LeCoultre Grande Reverso 101 ($150,000) proves that sometimes more is more.

The lilliputian Caliber 101 remains the smallest mechanical movement produced in Switzerland. But when suspended between the sapphire crystals of the Grande Reverso 101’s dial, the oblong movement becomes the watch’s central design element, in addition to serving as its power source. Jaeger-LeCoultre’s substantial jeweling expertise also comes into play on the case, which is pavéed with diamonds set in the company’s irregular Snow Setting pattern, perfectly complementing the pebbly galluchat strap. Grande Reverso 101 displays the company’s watchmaking as the art form that it is. Sometimes women have all the luck.

Cinette Robert, president of Dubey & Schaldenbrand, knows a thing or two about squeezing new life out of old parts; she used to be a dealer in vintage movements. Now she has tapped her knowledge of historical watch designs for the Dubey & Schaldenbrand Lady Antica ($4,500 to $19,900), an amalgam of past elements that together create an elegant, contemporary whole.

Lady Antica is limited to 450 pieces, because the hand-wound mechanical movements upon which the watch collection is based are no longer in production. Dubey & Schaldenbrand bestows each of these 1960s-era movements with intricate decorative engraving.

Robert’s historical expertise informs every detail, including the Maltese Cross–shaped hands. She discovered the design for the hands in an old reference book and commissioned the complex tooling necessary to re-create them. The Antica’s link with the past is more than an emulation of old-world sophistication; it is authentic.