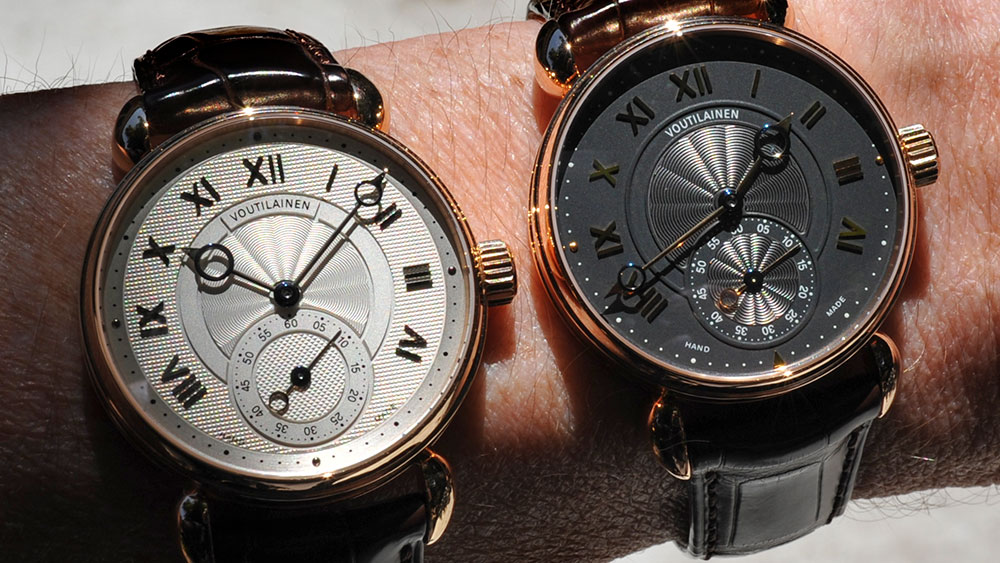 We asked a dozen watch collectors to answer a difficult question: What’s your favorite wristwatch introduction of the 21st century?

Beyond limiting the production period to the past 20 years, we didn’t set any parameters. It didn’t have to be a watch they’d purchased or owned (although if they did, all the better). It didn’t even have to be attainable.

It simply had to be a watch that moved them in one way or another. A timepiece that opened their eyes to the scope of the fine watchmaking industry, as Tom Angel, a London-based collector, recalled in his tribute to the Grand Seiko Hi-Beat 36000 GMT. Or a watch they intend to pass on to the next generation, like Los Angeles-based vintage lover Morgan King plans to do with his Junghans Max Bill. Or, rather dramatically, the one watch they’d take to their graves and wear for eternity—a conceit that San Diego-based collector Serena Hmwe indulged with obvious delight.

We can glean a few takeaways from our group—10 men and two women, based in London, Los Angeles, New York and a handful of other cities: One, the genuineness and depth of their passion for timepieces is not to be underestimated. Two, they have a scholarly appreciation for watches that is well-informed and extremely impressive. Three, history matters, both for context and storytelling. Four, they’ve chosen their watches for deeply personal reasons. And five, no two collectors are alike. (Only one brand—Audemars Piguet—earned more than a single mention.)

All of these factors combined go a long way toward explaining how and why the 30-year-old mechanical watchmaking renaissance shows no sign of abating. The fine watch industry is infinitely wide and impossibly deep: There’s plenty of room for everyone.

“My choice is the Grand Seiko Hi-Beat 36000 GMT, initially released in 2014. My favourite model is the SBGJ021 from 2016. Although not the catchiest of names, this watch is easily remembered by the quality and beauty of its components. The flawless zaratsu polished case is based on the sharp 44GS case shape from 1967, a nod to Grand Seiko’s long spanning heritage. The colours of the lacquered dial and anodic oxidized titanium rotor are inspired by the view of Mt. Iwate at sunrise that the Grand Seiko watchmakers have from their studio. The Hi-Beat GMT was a key player in the transformation of Grand Seiko, which a few years ago had only a cult following outside of Japan but is now adored globally by many watch collectors. Influenced by the beauty of Japan, the SBGJ021 is an embodiment of the qualities Grand Seiko is now known for and set a standard of excellence I’d previously only seen from independent and very high-end pieces. For me personally, it opened my eyes to a world of beautiful and exceptional watchmaking outside of Switzerland and for that I am grateful.”

“If one watch epitomises the first 20 years of this century, it’s the Frodsham Double Impulse Chronometer. The Frodsham team worked for almost 15 years on its development and finally released production models in early 2018, displaying not only a beautiful movement developed from Daniels’ Independent Double Wheel Escapement with the help of the late Derek Pratt, but also new technologies and materials that have elevated English watchmaking and shown the art of the possible: a truly superlative chronometer.”

“I’m still smitten with the IWC Top Gun Big Pilot Perpetual Calendar, which debuted at SIHH [the Salon International de la Haute Horlogerie, now called Watches and Wonders] in 2012. Aesthetics aside (I love how it looks), for me it was/is the epitome of IWC, which is one off my favorite manufactures. Not only is it based on the iconic B-Uhr flieger, which is an IWC stalwart, but it houses the c. 51614 perpetual calendar movement, which has legendary IWC watchmaker Kurt Klaus’s DNA all over it. Add to this its ceramic and titanium construction, both materials that IWC pioneered the use of in watches, and you have a one-stop shopping destination for the best of IWC all wrapped up in a single timepiece.”

“My favorite 21st century piece is the Audemars Piguet Royal Oak Perpetual Calendar Openworked Ceramic, presented in 2019. It is, essentially, a piece of art! Firstly, the bracelet is well known to every discerning collector: Each link has a different size, every one of them subject to exquisite finishing. On this note, it’s worth mentioning that in order to achieve the same level of finishing found in the stainless steel pieces, the work done on the ceramic case takes five times as much time, and it’s worth every minute.

“Onwards to the dial: The openwork structure is mesmerizing; you can see the superb attention to detail in each internal angle displaying a perfect finish. Another highlight lies in the moon phase display, with the moon set against an aventurine sky.”

“My pick is the Kari Voutilainen Observatoire (2007), for the following reasons:

“The current ‘Pepsi bezel’ GMT-Master II combines the Rolex sports model vibe of old with the modern day luxury movement (expressed by the inclusion of the Jubilee bracelet and that incredible ceramic bezel). It’s my absolute favorite modern timepiece. It transports me to another time and yet reminds me of today!”

“I recently played a game with my Chronogroup peers where we picked ‘the one watch’ to wear every day, for every occasion, with every outfit, and you have to be buried with it, so there is no resale value. : )

“My pick was the AP Royal Oak 15202 Jumbo Extra-thin salmon dial because the design is so timeless, and true to its original 1972 design. I love the beautiful soft salmon dial that looks just incredible and feminine, and the 39 mm case size is perfect for my wrist—the bracelet is perfectly tapered, has very flattering finishes and is very comfortable to wear.”

“Simple, minimalistic and timeless are what comes to mind when I think of the Junghans Max Bill Chronoscope. It is definitely one of my favorites and certainly positioned to be a classic when my kids grow up. I even have one for each of them when they are old enough and responsible enough to pimp them!

“Produced in collaboration with world-class Swiss artist Max Bill, whose mid-century modern wall clocks, table clocks and wristwatches quickly became timeless classics. Their popularity was so great that Junghans re-released them in their current Max Bill by Junghans series. So get yours now biatch!”

“It took me a while to decide on my favorite, but it is the Grönefeld 1941 Remontoire.

“I love its constant force mechanism, but the thing I find most captivating about it is the regulator bridge on the dial side, which spins every eight seconds. The minute hand then correspondingly moves 8/60 of a minute. This is inspired by the movement of the clock in St. Plechem’s cathedral in the Grönefelds’ hometown, which their father and grandfather before him maintained, and the story of that inspiration adds another layer to the appeal of the piece—it’s not merely a technical accomplishment, but a tribute.

“I also think that the proliferation, success and growth of independent brands in the 21st century thus far is fantastic for the industry and collectors alike. Small independent brands are enjoying greater reach than ever before due to platforms like Instagram, and new materials and prototyping and manufacturing techniques can help small brands who don’t have access to big manufacturing facilities. We all benefit from the creativity of independents and that creativity drives innovation throughout the watchmaking universe.”

“I’ve posted this watch numerous times on my Instagram, worn it to dinner while sitting next to Thierry Stern at the N.Y. Grand Exhibition, and had it on my wrist during a Hodinkee session with Cara Barret. It is what I would consider to be the most beautiful watch in my collection and one of the most beautiful Patek Philippe watches ever. All my good pals in the Beverly Hills Patek Club know that they’re likely to see it on my wrist at one of our dinners.

“I vividly remember first seeing it in Basel at the 2015 show and being completely blown away. That year, much of the talk about Patek was centered on the ‘controversial’ 5524 Pilot, but all I could think about was this beauty.

“My love and passion for Patek Philippe rare handcrafts is no secret. The fact that Patek nurtures artists and has taken responsibility for the preservation of some of Geneva’s dying crafts is what I admire most about the brand. I’m always hopeful about being bestowed the honor to acquire a rare handcraft, but due to their tremendously limited production, I am never overly optimistic. So when I got the call on September 24, 2016 from my dear friend Daniel Chen at Gearys Beverly Hills, I dropped everything and raced over! The Patek Philippe 5089G-027 Titanic is an enamel cloisonné masterpiece. No picture in the world can do it justice. The black hull has subtle gold flecks while the blue water appears to have natural movement. The case is white gold and features a hidden hinged dust cover that opens to show off the caliber 240 movement. The dial is utterly sublime. It is definitely my favorite watch.”

“My favorite timepiece of the 21st century is the FP Journe Sonnerie Souveraine.”

“Launched in 2006, the FP Journe Sonnerie Souveraine is one of the most impressive watches produced and includes both a grand and petite sonnerie with a minute repeater. This is a high complication watch that very few watchmakers or brands are even capable of making.

“At first glance, the FP Journe Sonnerie Souveraine appears understated. The design has all the signature Journe attributes with its off-center subdial that displays the time, a white gold and silver dial, blue steel hands and a knurled crown. The only hint of the watch’s complexity can be seen from the large window that gives a full view of the striking hammer.

“The real magic of the watch is the sound. When set in full grand strike mode, the hammers chime automatically on the hours and quarter hours every 15 minutes—35,040 times a year. The sound of the chimes is mesmerizing and augmented by Journe’s choice of a stainless-steel case, a material that he believes produces the perfect sound.

“The view of the gold movement through the sapphire crystal back is equally impressive and reveals the full complexity of the movement.

“I will never forget when I attended the 2006 the Grand Prix d’Horlogerie de Genève and watched Journe’s Sonnerie Souveraine win the Aiguille d’Or Grand Prix, the grand prize for ‘the best overall watch among all categories.’ It was at that moment that I knew Journe was a living legend and his Grand et Petite Sonnerie Soveraine would be my personal favorite watch of all time.”

“The watch I have selected is the Konstantin Chaykin Joker. It was introduced in 2017 by Russian watchmaker Konstantin Chaykin. The first moment I set eyes upon it, I was giddy with excitement. It evoked that rare quality that is oft sought, but rarely achieved with material goods: passion. I didn’t just want it, I was in love with it. Was it a rational feeling? Certainly not. Did my internal checks and balances kick in? Nope. I courted Joker, I played coy with Joker, but eventually, Joker won. Every time Joker and I go out, I smile. I suppose that’s love for you.”