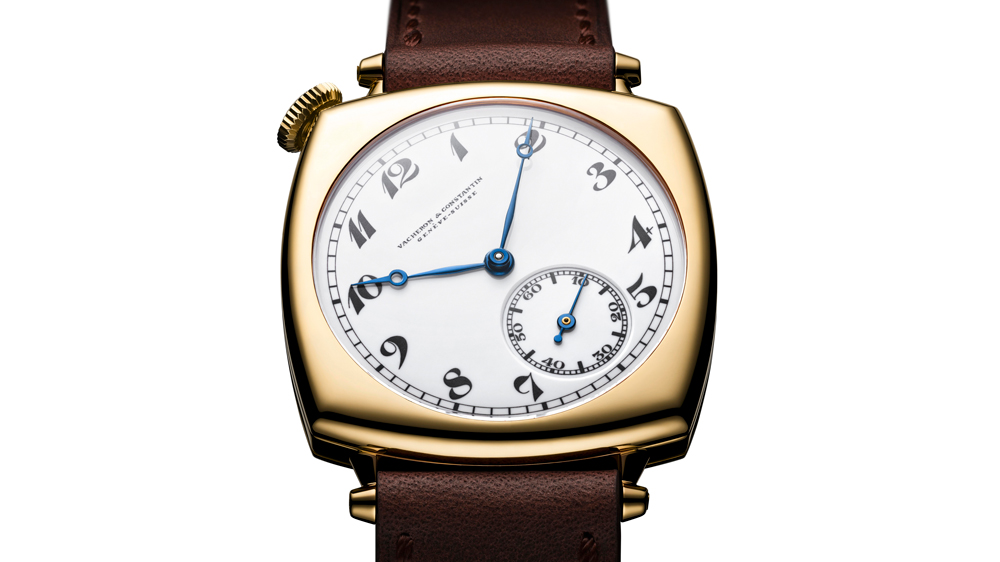 From January to November of this year, demand for Swiss watches was nothing short of insatiable. (According to the Federation of the Swiss Watch Industry, Switzerland exported the equivalent of 20.4 billion francs, or $22.2 billion, in that period, besting, by a couple of percentage points, the export figures for the same period in 2019.) The U.S. market drove much of that demand, reflecting the growing mania for high-end watches.

To satiate collectors and enthusiasts, watchmakers introduced countless models over the past 12 months — selecting the stand-out styles was no easy feat. The 16 watches listed below made the cut — a selection sure to intrigue, and perhaps provoke, watch fans.

It was the year’s best mic drop. In a move that shocked the watch world, Patek Philippe unveiled in early December the final final edition of its coveted Ref. 5711, aka the “Tiffany Blue” Nautilus, a 170-piece limited-edition featuring the Tiffany & Co. signature at 6 o’clock and a dial bathed in the retailer’s signature robin’s egg blue. And while it may not represent Patek Philippe’s finest example of watchmaking, the steel watch certainly will go down in history as one of the most polarizing timepieces of 2021. Few would deny the model serves as a poster child for the current era of skyrocketing demand for unobtainable steel sport models. (To wit: One example, put up for sale at Phillips’ New York watch auction in December, with proceeds going to benefit The Nature Conservancy, fetched $6.5 million.) On the flip side, Jay-Z proved it looks pretty damn good on the wrist.

Something about the off-center dial of Vacheron Constantin’s supremely elegant Historiques American 1921 feels just right for this year of twists and unexpected turns. A faithful adaptation of one of the brand’s most legendary timepieces, a cushion-shaped “driver’s watch” released in 1921, the encore edition that the brand introduced earlier this year honors the model’s centennial. And it’s as close to the original as it gets, down to the logo on the dial and the strap, which, while not vintage stock, was sourced from a supplier who specializes in early 20th-century calfskin leather styles. Talk about a time machine!

Jaeger-LeCoultre pulled out the stops for the 90th anniversary of its famed Reverso watch this year. Of all the novelties it introduced, including a four-faced model that blew our socks off, we’re partial to the Reverso Tribute Nonantième (meaning 90th in Swiss-French), an 18-karat pink-gold style with a silvered and sunray-brushed dial bearing a moon phase display at 6 o’clock and a date window at 12 o’clock. “It’s as classic and elegant as any traditional version of this model, but a turn of the dial reveals an entirely new expression,” we wrote upon its introduction in April, citing the model’s flip side, whose two round apertures, arranged like a figure-8, house a semi-jumping digital hour at 12 o’clock, among other enchanting details. Color us bewitched!

Twenty-five years in the making, the Deep Space Resonance by Vianney Halter, one of the pioneers of contemporary, independent watchmaking, is a serious contender for the most philosophically advanced, horologically complex timepiece of the year, if not the decade. In short, the model is a triple-axis tourbillon equipped with an acoustic coupling mechanism incorporating two balance wheels. A tribute to undulatory physics, or the theory that light is transmitted as waves, the model is the product of an R&D effort Halter began in 1996, inspired by some of the 18th-century watchmaker Abraham-Louis Breguet’s early efforts to achieve resonance—a physical phenomenon in which an external force or a vibrating system forces another system around it to vibrate with greater amplitude at a specified frequency of operation. Watch lovers besotted with mechanical wizardry—this one’s for you.

The new Chronomaster Sport collection from Zenith strikes us as the fulfillment of a decades-old prophecy. Having introduced the El Primero caliber 400, the world’s first high-frequency automatic chronograph movement, in 1969, the brand lays claim to one of the 20th century’s greatest horological legacies. That it’s now capitalized on that legacy with a handsome chronograph equipped with the zippy new caliber 3600 seems like a decision that was predestined. Many onlookers have pointed out the model’s resemblance to the steel Rolex Daytona—this one, however, may actually be available at retail.

The latest addition to Bulgari’s critically acclaimed Octo Finissimo series, a perpetual calendar housed in a sleek and ultra-lightweight titanium case, took home the “Aiguille d’Or” grand prize at the Grand Prix d’Horlogerie de Genève (GPHG) in November for its masterful take on micro-watchmaking. With a case that measures only 5.8 mm thick, the model is the world’s slimmest perpetual calendar. As Bulgari CEO Jean-Christophe Babin said when accepting the award, “It is an example of Italian genius and obsession for details.” We couldn’t agree more.

The SLGH005 “White Birch” from the Japanese watchmaker Grand Seiko rightfully tops myriad wish lists this year. Its most striking feature is its delicately textured dial, patterned to resemble the Shirakaba, the white birch tree of northern Japan, which thrives in the region surrounding the Grand Seiko Studio in Shizukuishi. But beneath that impeccable exterior ticks a technically accomplished movement, powered by a new Dual Impulse Escapement, a proprietary free-sprung balance and a horizontal gear train. In short, the timepiece—which, not surprisingly, won the best men’s watch prize at the GPHG—packs brains and beauty into one perfectly proportioned package.

Collaborations have become big business in the watch industry, but few are as interesting and unexpected as the co-creation that resulted from MB&F’s recent partnership with Bulgari. As we wrote in November, “the new 39 mm-by-20 mm LM FlyingT Allegra uses the same vertically built 3-D movement (it features a flying tourbillon on the upper end of the axis) and space-age domed case design as the original [FlyingT by MB&F], but now comes decked out in Italian opulence.” The colorful cabochon gems and diamonds that orbit the dial lend this serious piece of timekeeping a groovy, cosmic vibe—precisely, we suspect, the effect its creators were seeking.

On the brink of the Royal Oak’s big 5-0 in 2022, Audemars Piguet didn’t shy away from expanding the collection this year. In July, the brand rolled out eight new Royal Oak styles for women, including the undisputed winner of the bunch, the Black Ceramic Royal Oak Selfwinding. Encased in a lightweight, scratchproof material that looks fantastic from virtually every angle, the sturdy yet graceful timepiece—which boasts 18-karat pink-gold hour markers, hands and screws—has a diameter of 34 mm, a size that promises to entice plenty of men who are sure to covet its stealthy on-the-wrist appearance.

Another collaborative homerun this year was the Submersible edition that emerged from Panerai’s team-up with the German automotive aftermarket tuner Brabus. Inspired by the company’s Shadow Black Ops series of day boats, the watch is housed in a 47 mm case made from Panerai’s matte finish Carbotech composite material, and features a color scheme borrowed from Brabus’s signature palette of gunmetal gray, black and red. Panerai fans are bound to lust after the watch for its three years-in-the-making skeletonized automatic movement, the brand’s first-ever. But just about everyone will appreciate its stylish approach to functionality.

In April, when Rolex unveiled the brand new Explorer—often described as the original tool watch, given its association with Sir Edmund Hillary and Tenzing Norgay’s historic ascent of Mt. Everest in 1953—the fact it came in a two-tone case in Rolesor (in Rolex-speak, this refers to the combination of the dual 18-karat yellow-gold and Oystersteel alloys) divided the watch community into lovers and haters. Count us squarely in the former camp (although, you can still opt for the full steel model, pictured right). Not only is the model’s 36 mm case (a return to its original sizing) just right for unisex tastes, its lacquered black dial and Chromolight coating on the hour markers and hands give it a fetching, and fresh, new look.

Endowed with two distinct faces, the DB Kind of Two Tourbillon boasts two equally distinct vibes: Side “A” is in keeping with the boutique watchmaker’s more experimental, future-facing ethos, while side “B” represents a more refined and elegant take on horology. Toggling between the two requires nothing more than swiveling the case on its central axis, an action made simple by the titanium model’s floating lugs, each equipped with a rotating mechanism comprised of 28 components.

Famed for its unusually-shaped watches — the Tank, the Crash and the Baignoire, to name just a few—Cartier reintroduced a limited edition shaped style earlier this year in its Prive Collection called Cloche de Cartier, a 1920s model with a beguilingly quirky display (the Roman numerals are rotated 90 degrees from where you’d expect them to be). Named for a bell, the wristwatch works equally well as a mini table clock—and captures Cartier’s wonderfully inventive way with silhouettes.

In anticipation of the 25th anniversary of the opening of its Fleurier and Geneva watch manufactures next year, Chopard released in November a new platinum version of its L.U.C Full Strike minute repeater, an acoustic timepiece that earned rave reviews for its innovation and elegant design when it was introduced in 2016. The model’s key differentiating detail is its one-piece crystal and gong component, machined from a single block of sapphire, that indicates the time through a combination of two notes, C# and F, with a crystal-clear, constant sound. “A platinum minute repeater would never otherwise resonate like this,” Karl-Friedrich Scheufele, Chopard’s co-president, told Robb Report. “The metal would just eat the sound. But the crystal system enhances the sound.” Each watch takes 160 hours to assemble—and it shows.

In July, A. Lange & Söhne celebrated the 20th anniversary of its Langematik Perpetual—the first mechanical wristwatch of its kind to combine a perpetual calendar with the brand’s signature outsize date—with two blue-dial updates, one cased in pink gold and the other in white gold. Endowed with a Zero-Rest mechanism and a main corrector that simultaneously advances all calendar displays, the new models are designed to simplify and speed up the time-setting process, proof that a watchmaking icon can always be enhanced with new tricks.