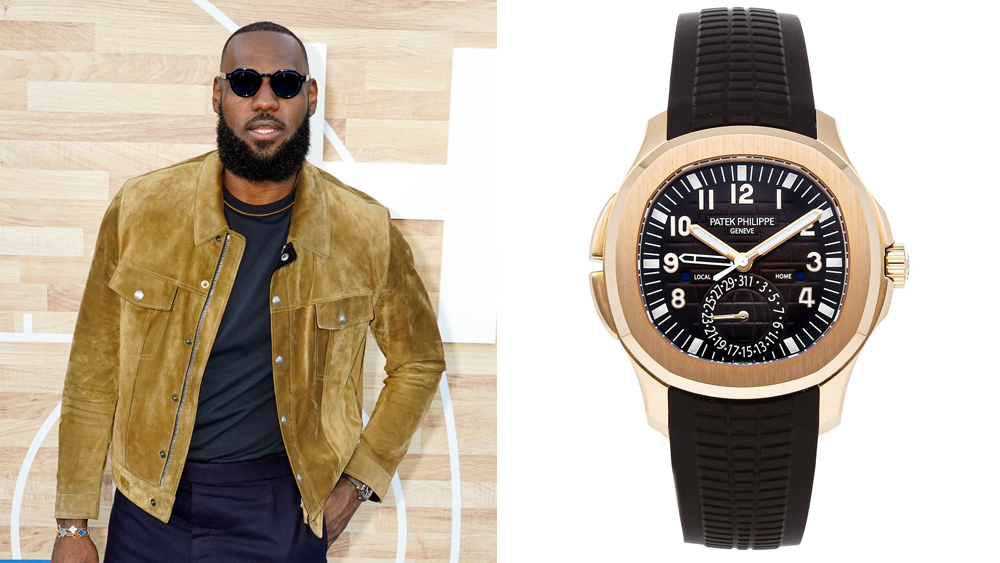 LeBron James may have to wait to add another championship ring to his collection, but it’s another story when it comes to watches.

Basketball’s second billionaire showed up to the premiere of Adam Sandler’s new movie Hustle in Los Angeles last Thursday wearing a Patek Philippe Aquanaut Travel Time. The gold and brown number is the latest proof that James is as talented at picking out the right timepiece as he is spotting the perfect pass.

The Patek was well suited to the understated outfit—black shirt and jeans topped with a brown suede jacket—the Lakers star wore to see the latest movie produced by his SpringHill Company. Although it looks almost casual at a glance, the watch is actually quite elegant. This particular version, ref. 5164R-001, features a 40.8 mm case made from rose gold, as opposed to the steel used on most other versions of the Aquanaut Travel Time. Beneath its sapphire crystal you’ll find an embossed dial adorned with gold applied numerals with luminescent coating and a date sub-dial at six o’clock. The timepiece features a dual time zone mechanism that allows you to easily tell the time wherever your travels take you, as well as at home. Two buttons on the left flank of the case move the local hour hand forward or backward in one-hour increments. The bracelet is made from a dark brown polymer material that matches the dial and has an Aquanaut fold-over clasp.

The timepiece and that dual time zone mechanism are powered by Patek’s 324 S C FUS self-winding mechanical movement. It consists of 294 separate parts and 29 jewels. It has a power reserve of up to 45 hours.

The Patek Philippe is just one of a number of dazzling watches owned by the 18-time all-star. This year alone, James showed up to the Super Bowl in January wearing the much-ballyhooed Patek Philippe Tiffany-Blue Nautilus. And, in April, he wore a stunning Audemar Piguet Royal Oak “Jumbo” while taking in the final game of the ill-fated Los Angeles Lakers season.

As for the Aquanaut Travel Time, the gold and brown timepiece cost $60,910 when it originally went on sale in 2016. Now, though, it can command up to $150,000 on secondary market platforms like WatchBox. With a 10-figure net worth, we can’t imagine that either of those numbers gave James pause.