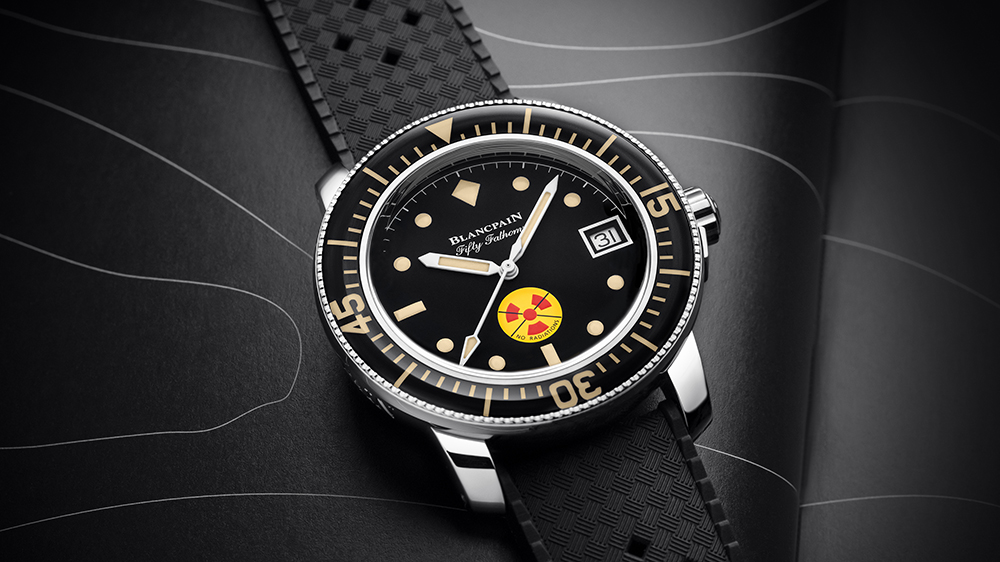 Blancpain’s newest exclusive watch isn’t just a tribute to one of its most memorable releases, it’s also a reminder of how much life has changed since the middle of the 20th century.

The Swiss company has just announced the limited-edition Tribute to Fifty Fathoms No Rad timepiece. Filled with period references, the watch is a modern reinterpretation of one of the most head-turning diver watches of all time.

Used by the German Navy’s combat swimmers during the mid-1960s, the Fifty Fathoms No Rad has risen to cult status thanks to its dial. That’s thanks to the “No Radiations” symbol stamped at 6 o’clock, an element that has become the watch’s trademark. The striking figure may seem like an odd design flourish today, but it wasn’t at the time. People were still very terrified by radiation poisoning, not just because of World War II, but because of the mid-century radium scare. That symbol was Blancpain’s way of letting divers and watch enthusiasts know that the watch was radium-free and safe to wear.

The tribute watch features a 40.3mm stainless steel case, which is slightly smaller than the original 41mm case. That’s topped by a unidirectional rotating bezel that allows divers to keep track of how long they’ve been underwater. Underneath the bezel and its glassbox-type sapphire crystal insert, you’ll find a matte black dial with the “No Radiations” symbol just above the six o’clock marker and a date aperture sitting at 3 o’clock. Interestingly, considering the story behind the watch, the hour markers, hands and time scale on the bezel are all coated in a hue of Super-LumiNova called “Old Radiation.” Rounding off the package is a period-appropriate, Tropic-style rubber band, a favorite of the era’s divers because of its comfort and durability.

The Tribute to Fifty Fathoms No Rad’s caseback  Blancpain

The watch’s 300-meter water-resistant case houses a Blancpain Calibre 1151 self-winding movement. It’s equipped with a silicon balance spring and a four-day power reserve. Both barrels in the movement are wound by a rotor that features a “cartouche-shaped aperture,” according to the watchmaker. Although this detail is rare on today’s watches, in years past it was used to make the oscillating weight a more supple, offering added protection for the movement in case of impacts.

If you’re looking for a classic dive watch with some personality, the Tribute to Fifty Fathoms No Rad is available now for $14,100. The stylish, retro-inspired timepiece is limited to just 500 examples.