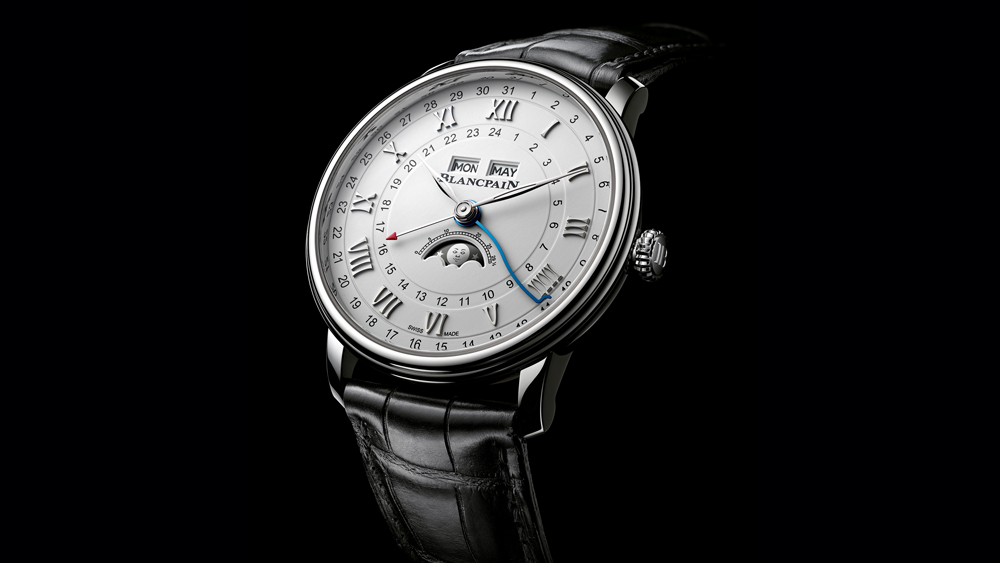 Sometimes, all it takes is one small tweak to take a watch from pretty good to great. For the Blancpain Villeret Quantième Complet GMT, that tweak is under-lug correctors, which allow the watch to be reset on the go without the need for tools to adjust the settings. (The Villeret collection also produced the Best of the Best–winning Shakudō.)

The non-GMT Villeret Complete Calendar—introduced back in the 1980s—has long been a best seller for Blancpain and was upgraded with the brand’s patented under-lug correctors in 2005. The GMT function, which allows the wearer to keep track of two time zones at once, was added to the model in 2002, transforming it into the perfect travel watch. Until now, only one thing was missing on the GMT Complete Calendar: under-lug correctors, which are virtually necessities on a complete calendar.

In the last few years, the complete calendar has made something of a comeback as an affordable alternative to the perpetual calendar. Unlike the annual calendar and perpetual calendar, the complete calendar does not take into account the variable lengths of the months, so it must be corrected five times a year—at the end of months shorter than 31 days. That means the wearer will be spending some time with the correctors. This typically involves pressing a series of tiny push pieces on the case sides, usually with a pin tool of some kind. The under-lug correctors do away with this inconvenience, positioning the correctors as small levers under the lugs on the backside of the case. They are easier to access and are operated with just your fingertip. Plus, they streamline the case design, leaving it unmarred by visible divots on the sides.

The movement used by the watches in the Villeret Complete Calendar GMT series has been upgraded several times, mostly recently with the in-house automatic Caliber 67A5, which features a silicon balance spring. What hasn’t changed is the signature stepped case, luxuriously stylized Roman numerals, and the familiar face on Blancpain’s moon-phase indicator.