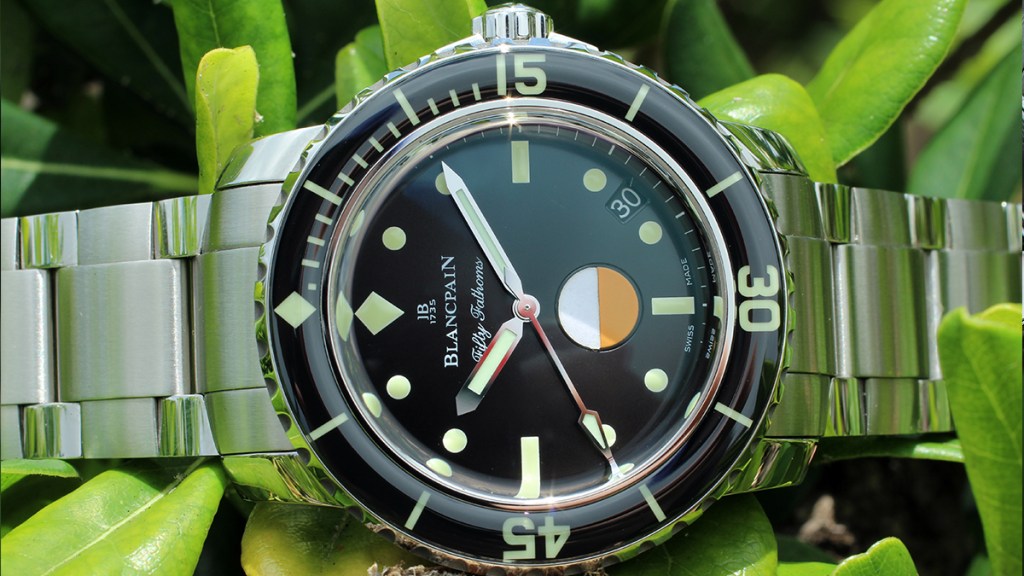 With vintage reissues being all the rage, we weren’t surprised to see Blancpain roll out the all new and very limited Tribute to Fifty Fathoms ($14,100) earlier this year. The original Fifty Fathoms was the mother-of-all modern dive watches—the first automatic diver, and the first with a rotating bezel for timing. And this specific version is designed as a nod to MIL-SPEC 1 variant originally unveiled in 1957.

Blancpain stayed true to the piece’s original DNA in several ways with the new release, and not just in terms of design. In its day, the original Fifty Fathoms was packed with innovations to overcome the struggles that came with diving in that era. While depth rating is no longer a challenge in modern watchmaking, Blancpain ensured that the new piece took full advantage of the brand’s technical prowess. Before we get to that, it’s time for a quick history lesson.

As the story goes, two separate missions were afoot that lead to the creation of the Fifty Fathoms. Blancpain’s then-CEO Jean-Jaques Feichter, an avid diver and sportsman, took the helm of the brand in 1950 and set out to create a wrist-worn instrument capable of tagging along on his sporting excursions. Meanwhile Robert Maloubier, co-founder of the French elite combat diver unit, had been searching for a brand capable of creating a robust watch capable of diving below the surface with his squadron. The circumstance was one part marriage of necessity, and one part match made in heaven. Before long, the Fifty Fathoms was born.

Capable of diving 91 meters below the surface (or 50 fathoms—hence the name) and equipped with both a locking rotating bezel and antimagnetic protection, the 1953 release was the perfect no-frills diving tool for any professional diver. From this initial breakthrough, the Fifty Fathoms rapidly gained popularity amongst civilian divers, immortalized by Jacques-Yves Cousteau in his 1956 film The Silent World, and spawning a number of variations including the MIL-SPEC 1 that launched in 1957, from which this new version draws its inspiration.

Visually it’s easy to see the how the new Tribute to Fifty Fathoms MIL-SPEC nods to its predecessor. Most notably, a water tightness indicator at 6 o’clock is carried forward from the old model, which turns from white to red if moisture manages to penetrate the case. The balance of its dial, as well as its hands are all very true to original, though we do see the addition of a date window. Taking full advantage of modern materials innovations, a scratch-proof sapphire bezel insert is installed, whose indices are also fully lumed. Its bezel has more scalloped ridging than the original version, and even its case has a more finished feel across the board, making clear distinction between outright task-driven engineering of the past, and a more elegant and wearable modern interpretation.

The MIL-SPEC takes full advantage of Blancpain’s in-house movement manufacture, and compared to countless other divers on the market, it is at the head of its class. Its caliber 1151 automatic movement uses a pair of series-coupled mainspring barrels, giving the piece a four-day power reserve. It’s equipped with a silicon balance spring, adding to both its shock resistance as well as its resistance to magnetism. Matching modern dive watch standards, the piece is water resistant to 300 meters, though it is still equipped with a sapphire exhibition caseback to allow its owners a closer look at its inner workings.

First examples are slowly arriving, though if you’re in the market you’re going to want to hurry—many Blancpain boutiques already have a running waitlist, and only a percentage of the 500 pieces being made are headed to the U.S.