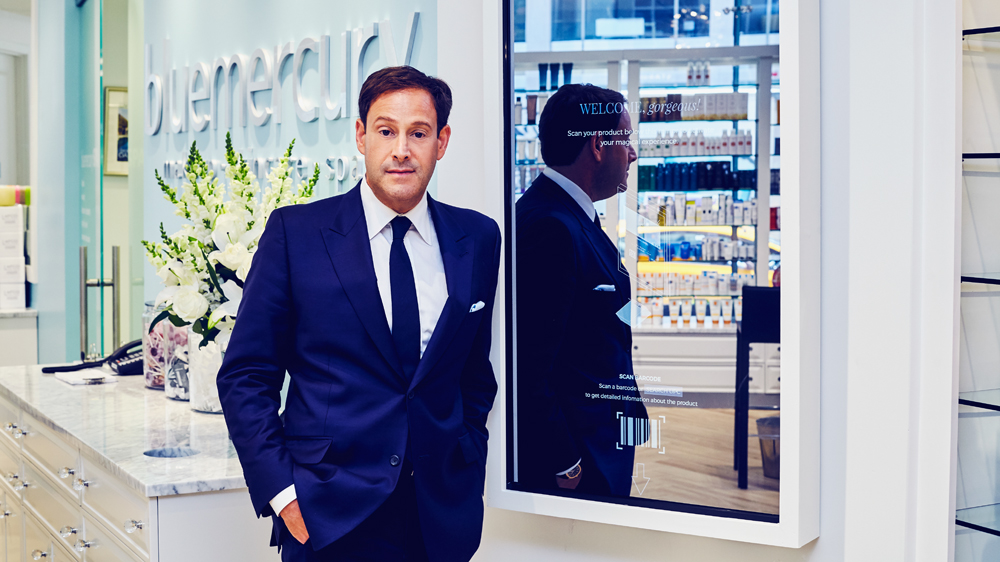 Serial entrepreneur Barry Beck and his wife Marla Beck built their luxury beauty retailer, Bluemercury, into a booming business. Macy’s bought the business, which the Becks still run, for $210 million in an all-cash deal in 2015 and, as of last year, analysts say Bluemercury could be valued at $1 billion, accounting for one seventh of Macy’s total business. Like most successful entrepreneurs, passion dictates everything Beck does including his hobbies. Beck sat down with us to discuss how two seminal life events sparked an obsession with the mechanical engineering of Patek Philippe and Ferrari.

What kickstarted your passion for watches?
My grandfather, who lived a simple life despite his successful career as the original maker of Izod Lacoste. When he passed, he left his gold Patek Philippe wristwatch for me at the age of 18. A watch and a wedding ring can be one’s most personal effects, so to wear his watch every day really fortified my connection to his legacy. I wore my grandfather’s watch every day until 1995 when it was lost. I felt the missing connection to my grandfather would be impossible to replace. The emotional blow helped me realize that it was not about the heirloom itself, but what it symbolized.

What led to your first purchase?
After the loss of my grandfather’s Patek, I set out on a nearly two-year endeavor to find a worthy replacement. After assembling a short list of what I believed were the world’s top haute-horologie brands, I ranked them based on certain objective criteria: quality of manufacture, brand heritage, elegant aesthetic, auction prices realized for vintage pieces, limited production, and brands whose movement was made wholly in-house. Patek Philippe distinguished itself in every respect and that coupled with the fact that my grandfather had also chosen Patek, led me to conclude that this would be the only brand for me. Since 1839, they have produced fewer than 1 million pieces, 14 times less than other brands I investigated. The limited production and distinctive quality has created tremendous value over time. I was surprised to learn that Patek Philippe’s 1518 Stainless Steel Chronograph, which originally sold for $2,265 in 1943, realized more than $11 million at auction in 2017, breaking a world record for the most expensive wristwatch ever sold at the time.

What reference was your first timepiece from Patek Philippe?
I wanted to restart a tradition to pass on to future generations. I bought the Patek Philippe 5015J Power Reserve Moon Phase in yellow gold. The initial attraction was its coined edge, deployant buckle, white face, and the back that opens to display the fascinating micro-engineering inside. It was beautiful, refined, and simply elegant. It was reminiscent of my grandfather’s watch and so it reconnected me in some small way to him.

What was it about your first purchase that sparked your continued interest in watches?
I realized while making my first purchase that the human race is literally obsessed with time­—we buy it, waste it, and even borrow it. The more complicated the watch, the more time it can control. The act of manually winding my watch becomes almost meditative. I’ve attained a certain level of success, but I woke up this morning frenetic. I had to buy a bond, I had this meeting come up, I have to do some homework to prepare for a New York Stock Exchange appearance, and I’m buying a company right now. In our fast paced on-demand economy, technology can make us slaves to time rather than masters of it. My timepiece demands that I take a pause in my day, remove it and go through the act of winding it. It has come to symbolize a way for me to control my time, slow down my world and turn it back in a way that digital timepieces simply cannot.

At what point did you begin building a collection?
As we grew Bluemercury, I dreamed of scaling it into a luxury brand and household name. I liked that Patek Philippe is a family owned business with limited production—just like Bluemercury. We don’t have thousands of stores but we are also the best in the world at what we do. As my tastes developed, I explored deeper into the brand and discovered watches that fit differing aspects of my lifestyle—from the Aquanaut 5167R in rose gold, which is waterproof to 300 meters, to a watch that I wear exclusively for red carpet events. One of the more exciting watches I acquired was the 5170J Chronometer in yellow gold to which I added a royal blue band. I thought it was a playful juxtaposition to what is an otherwise patrician timepiece. I frequently use its stopwatch feature to measure lap times while racing cars.

What was your “graduation” timepiece?
That’s easy. My wife, Marla surprised me at our beach house for our 15th anniversary with the 5204R Split Seconds (rattrapante) Chronograph. Earlier that summer in Paris, I made a point to go to the Patek Philippe boutique on Place Vendôme. A young manager named Alexa unveiled the next level of Grand Complication watches to us, including a Minute Repeater and the 5204. Marla knew I was instantly blown away. Unbeknownst to me, she purchased it. Usually, my wife is not able to just blindly buy something unless she knows I really want it. Ties, yeah, but I mean Patek Philippe or Ferrari…typically she’s not going to go pick a Ferrari for me—I once switched the color of the Ferrari I wanted after consulting seven people.

What did you love most about the 5204R?
It requires a master craftsman’s dedication for over a year. The dial alone takes 100 steps to create, and then 20 bath treatments to ensure a proper color. Interestingly, there’s almost nothing to the 5204 that seems to want to call attention to itself—no extraneous decorative flourishes, engravings, gem settings, or even enameling. The watch somehow manages to avoid seeming as if it’s striving for effect, and amazingly there’s an overall feeling of sobriety which conveys of the 5204 a kind of gravity and seriousness the watch deserves.

Your wife wears a men’s Patek Philippe. How did she choose hers?
Marla’s 5006G is a wafe-thin men’s tuxedo watch, which I bought her for her birthday in 2012. It’s a vintage watch we found while shopping in Boston at, serendipitously, the same store where I purchased my first Patek Philippe. She was immediately smitten. My wife, like my grandfather, prefers a pared down lifestyle and look. She’s a quintessential Northern California girl. She wears the watch as an everyday piece and most people have no idea it’s a men’s watch. It’s so slim and unassuming and I also wear it for black tie events.

What do you have your eye on next?
I’ve had my eye on a Minute Repeater, the “holy grail” of watches. Minute Repeaters are rare masterpieces of precision mechanical engineering. Assembling one is a rigorous scientific practice that will take the watchmaker, who must have decades of experience, more than a year of work. One timepiece will never sound like another because of the careful analysis of its metallurgy and sound quality.

Have you visited Patek Philippe’s manufacture in Switzerland to see them in the making first-hand?
We are planning a family vacation to Europe this summer and I intend to take my 11-year-old son Luc, an aspiring engineer. I hope he will develop the same lifelong love of the brand as I have.

Do you wear all of the watches in your collection?
I don’t live my life preciously. I recognize that some timepieces rise to museum quality, yet I wear mine everywhere—skiing, boating, surfing, all the way to the board room. I wore my 5167 with a tropical strap while I was surfing in Surfer’s Corner in Africa and my whole hand is broken from a ski accident that happened with my Patek on!

Tell us about your Ferrari collection. Do you ride them like you wear your Patek Philippe?
I drive my cars everywhere, to my morning cup of coffee, to scout a new Bluemercury location, and around some of the most challenging Formula 1 circuits in the world. Last summer, I raced Le Circuit Mont-Tremblant with its infamous and sometimes deadly turn 7. I was driving so fast my tires emulsified and I was being pelted by hunks of rubber peeling off the cars in front of me.

What do you drive on a road trip?
Either my Range Rover Supercharged or my Mercedes S63 AMG—they’re both perfect because they fit my whole family.

Does your wife share your passion for Ferrari?
My wife likes attending the Formula 1 Grand Prix racing. We attended the 2017 Monaco Grand Prix as guests of Ferrari and spent time in the garage with aces, Kimi Räikkönen and Sebastian Vettel.

What drew you to Ferrari initially?
Who doesn’t love Ferrari? It’s exotic, romantic, sultry and genuine. It’s art in motion. I grew up watching Magnum, P.I. drive his red Ferrari 308 GTS and I was hooked. The Ferrari brand is an unparalleled amalgam of both science and art. These cars deliver everything man knows about aerodynamics and automobile engineering in what feels like black magic. Ferrari’s unrivaled racing pedigree has also made them highly collectable, sending prices for some of its 1960’s golden era cars into the stratosphere. CNBC tracks a Ferrari Index, which over the past two decades has outperformed virtually every asset class including stocks, private equity, and real estate.

What is your dream purchase?
A rare 1967 Ferrari 330 GTS. It eluded me for quite some time until the 2017 Concours D’Elegance at Pebble Beach, the automotive valhalla, where I found the car, drove it, and fell in love.

How did you purchase your first Ferrari?
I didn’t purchase my first Ferrari, I won it in a bet with my older brother, Adam, that we made during the building of our first company. In 1995, I visited him and found him weeping. We were broke. We had less money in the bank that day than the amount of rent and payroll we had due, let alone all the other bills. In an effort to cheer him up, I bet him we would attain a certain level of success within the next 10 years. I bet a Ferrari. In 2004, during the frenetic process of building Bluemercury, I received a call from my brother. He notified me that we had sold our first company. I picked out a Ferrari 360 Spider in triple black.