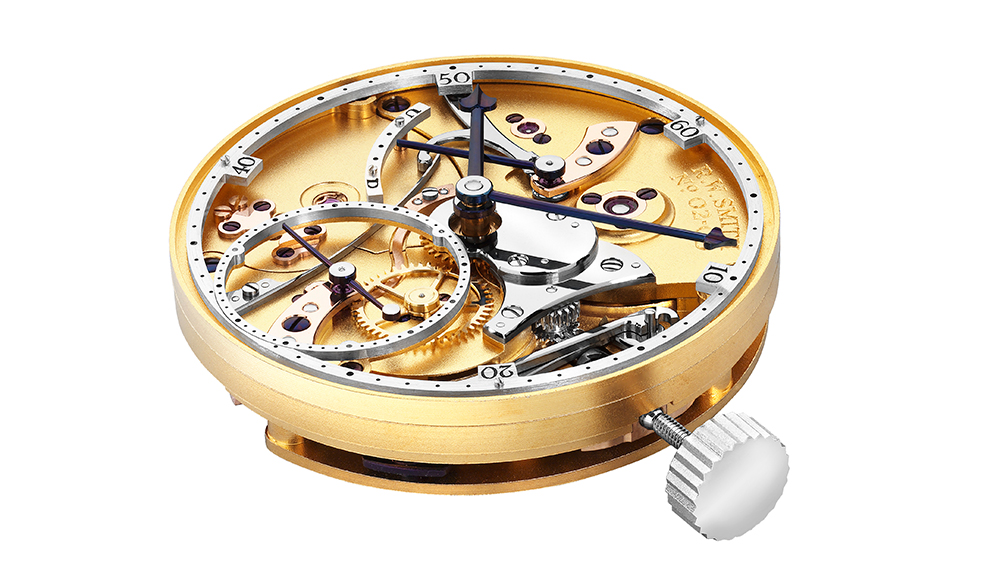 Swiss watchmaking gets all the attention, but anyone with cursory knowledge of watchmaking history knows that the English once ruled the horological roost. The British were at the cutting edge of watchmaking science until the 19th century when the Americans perfected the mass production of timepieces (followed in short order by the Swiss). And even though the British never regained their supremacy, the legacy of their accomplishments lives on in Roger W. Smith, a 45-year-old independent watchmaker who makes about 10 timepieces a year—from start to finish—in his workshop on the Isle of Man.

In November, Smith—a protégé of the legendary British watchmaker George Daniels, whose greatest achievement was inventing the coaxial escapement in the 1970s—unveiled his first range of watches at Salon QP in London.

“It’s been almost 15 years since I set up on my own, and what I wanted was a bit of a restart, a rebirth,” Smith says. “Over those years I’ve learned a terrific amount. In the workshop, I’ve developed a new light, single-wheel version of George’s coaxial escapement. What I had to do was create a new Series 2 movement to house this escapement. And during this process of redesigning the Series 2, I decided to create a range of watches based on various projects I’ve done over the years.”

Smith’s collection now includes a completely new Series 1 model, a time-only piece in a round case (from $104,800); an upgraded Series 2, which has not changed visually but is powered by a redesigned movement (from $152,500); the Series 3, whose new movement features a retrograde-calendar date mechanism (from $121,400); and the Series 4, a triple-calendar complication watch with a moon-phase indication (from $291,200).

But collectors who would like to get their hands on one of these models will have to be patient. “At the moment, we’re still quoting three to three and a half years for any of these pieces,” Smith says, adding that the simplest watches in his range require almost 11 months to complete. That is because Smith makes every component of his timepieces—except the balance and mainspring, the jewels and screws, the sapphire crystals, and the leather straps—in the time-honored tradition of English watchmaking. The hallmarks of that tradition include gilded and frosted movement plates, black-polished steel, and hand engraving on both the inside and outside of the watch. Smith’s design work also presents a strong three-dimensional quality that gives the watches great strength and long-term durability.

“We’re making something to a very high standard that simply isn’t attainable in mass production,” Smith says. “And that’s what I’m keen to create: that difference.” (rwsmithwatches.com)