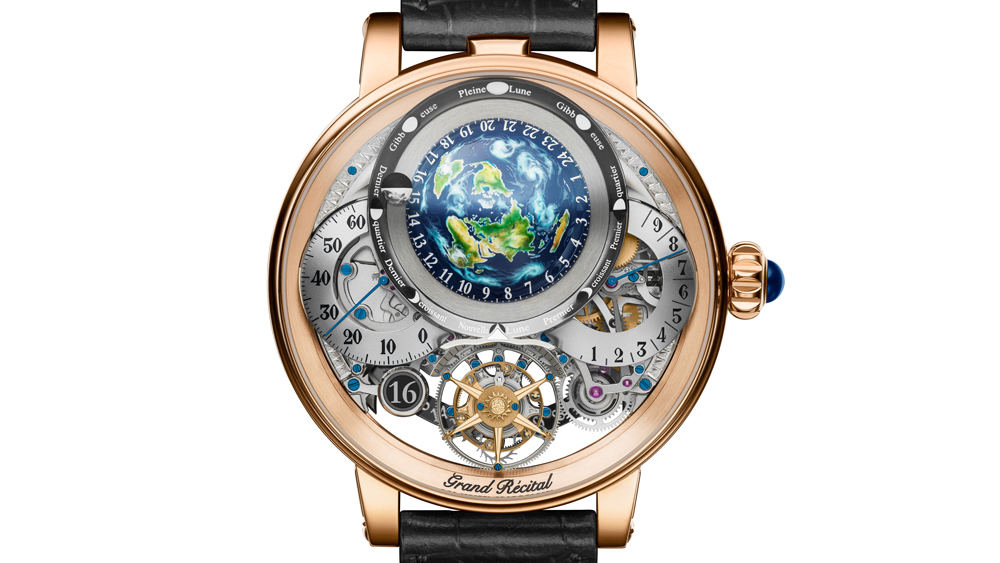 Bovet 1822’s Recital 22 Grand Recital took the top prize at the Grand Prix d’Horlogerie Genève, known as the Academy Awards of Swiss watchmaking. Results of the competition were announced at a gala presentation in Geneva last Friday attended by the crème de la crème of the watch world.

The second big winner of the night was the Akrivia Chronomètre Contemporain, which took the prize for best Men’s timepiece of 2018. Fellow independents Pierre Laurent, and Greubel Forsey took home big honors as well with Laurent winning the Complications category for his Galet Annual Calendar School Piece, and Greubel Forsey taking home the Mechanical Exception prize for its million-dollar Grande Sonnerie, taking the prize for Mechanical Exception.

The Bovet 1822 Recital 22 Grand Recital is the third and most complicated in a trilogy of astronomical complications made by this small independent brand, which makes only 2,000 watches a year. The timepiece is equipped with a mind-boggling array of functions. Aside from hours, seconds, and retrograde minutes, there is day, month, year, moonphase, power reserve, flying tourbillon, perpetual calendar, double-face retrograde date, perpetual calendar and a tellurium-Orrery.

The latter function is a mechanical model of the solar system named after the 4th Earl of Orrery, who commissioned the first one every made, in 1704. It depicts the earth on a hand-painted lacquer subdial, surrounded by a 3-D spherical moon that orbits the earth according to the exact length of its synodic period: 29.53 days. A tourbillon escapement at 6 o’clock represents the sun, with gold beams on the carriage emanating from a central motif. The 60-second tourbillon, also serves as a seconds indictor. The watch will be made in a limited-edition run of just 60 pieces, with each customized to the buyer’s choice of orientation on the world map; one would expect no less at the price of CHF 468,500 (about $465,599 at current exchange).

The Akrivia Chronomètre Contemporain, winner of the Men’s Watch Prize comes signed by the company’s founder Rexhep Rexhepi. A rising star in the world of independent watchmakers, Rexhepi founded the brand in 2012 at the age of 25, after apprenticing at Patek Philippe and working as a master watchmaker for F.P.Journe. Akrivia is Greek for “precision” and the RR-01 movement of its winning timepiece, certified by the Besançon Chronometer Observatory, features a stop seconds and zero-reset mechanism for precise time setting. The watch is manual-wound with 100-hours of power reserve from one mainspring barrel. The dial comes in white or black grand feu enamel, with Art Deco-style asymmetrical gold or blue lines framing Roman numbers. The large diameter of the sub-seconds counter at 6 o’clock is a tribute to officer’s watches of the 1940s. It is limited to 25 pieces and priced at CHF 59,940 (approximately $59,569 at current exchange).

Overall, the independent watchmakers reigned supreme at this year’s Grand Prix d’Horlogerie Genève awards. Bigger watch brands have been playing it safe with new releases, opting to go for steel retro-inspired introductions in line with trends among younger watch consumers. As a result, the independents have been standing out for their contributions to innovative watchmaking and collectors have been taking note, especially with newcomer Akrivia, who is widely considered the new darling in top tier collecting circles.

Additional prizes in the Grand Prix d’Horlogerie Genève in the men’s category include: