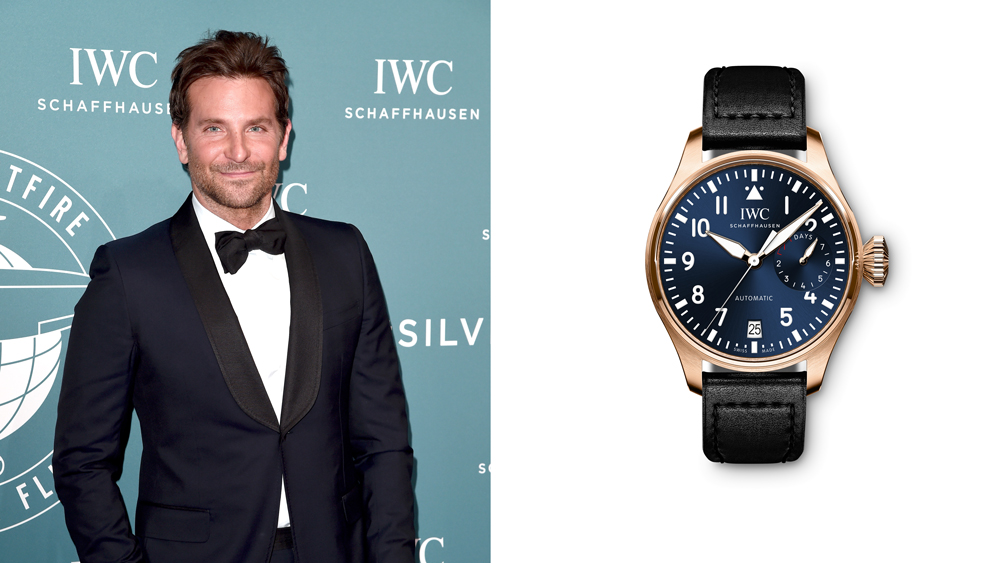 The 91st Academy Awards are just two days away, but IWC is already gearing up for its special edition Big Pilot to take flight on the red carpet on the wrist of Oscar nominee Bradley Cooper. Nominated for his turn as Jackson Maine in the hit A Star Is Born, which he also directed, Cooper missed out on a win at The Golden Globes. But the film, which had a production budget of $36 million, has already grossed over $210 million domestically and $432.6 million worldwide, so it’s safe to say Cooper is taking home the real prize. The film also had eight Oscar nominations, so it’s bound to take home a golden statue.

On Sunday, the A-lister will be showing off a little gold on his wrist with his IWC Big Pilot’s Watch Single Piece. Cooper teamed up with the Swiss watchmaker to wear the timepiece to raise money for charity through a Sotheby’s auction, which is already taking bids for the watch starting today and ending on March 4th. The watch has an estimate between $20,000 to $30,000 with a current bid of $16,000. Proceeds from the auction will go to the Antoine de Saint-Exupéry Foundation in Nice, France—an organization with a mission to help tech visually impaired children how to read drawings in two-dimensional relief through the sense of touch, naturally using the book The Little Prince.

Antoine de Saint-Exupéry, the former French pilot who wrote the famous children’s book, has become an important part of IWC’s DNA. The pilot and author’s foundation and family have been partners with IWC since 2006, when they first collaborated on a joint exhibition of the remnants of the wreckage of Saint-Exupéry’s fatal plane crash in 1944, discovered off the coast of Marseille in 1998. The watchmaker and the foundation have since been partners for the last 13 years and the pilot and children’s book author has inspired many of IWC’s Big Pilot timepieces.

The Big Pilot’s Watch Single Piece (Ref. IW500923) features a midnight blue dial with a 51111-caliber movement with a spring-mounted rotor and Pellaton pawl-winding system that builds up a power reserve of seven days. On the back of its 18-carat 5N gold case, a quote from The Little Prince reads, “It is only with the heart that one can see rightly.” Bidding for the timepiece ends at 11:00 A.M. EST/4:00 P.M. GMT on Monday, March 4th.