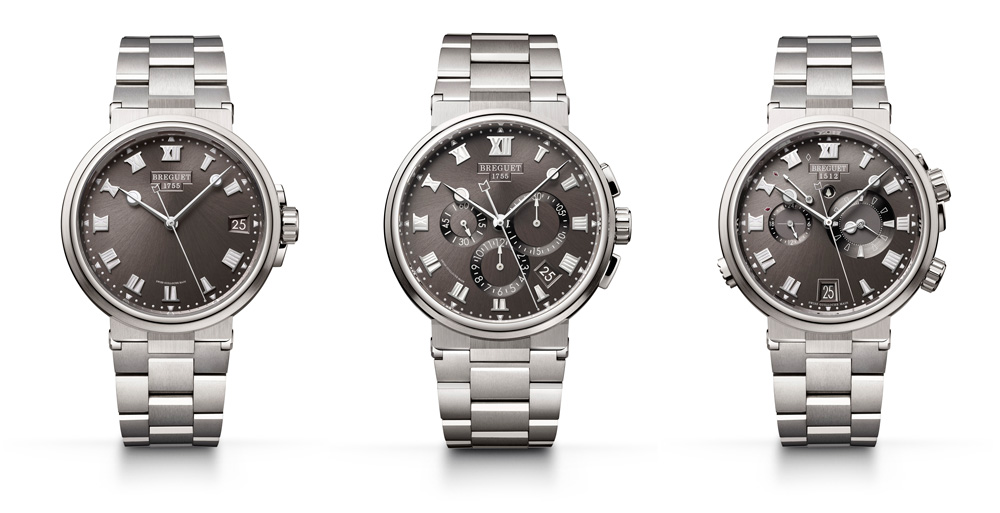 Master watchmaker Abraham-Louis Breguet is best known for a slew of 18th and 19th century horological inventions, from a shock protection system known as the pare-chute to the tourbillon, that all but guaranteed him a place of honor in watchmaking’s hall of fame. Less well-known is his expertise in chronometry, and the fact that it resulted in his 1815 appointment as the official chronometer-maker to the French Royal Navy.

Earlier this spring, the brand that bears his name unveiled a new Marine collection inspired by the history of Breguet’s naval clocks. The three self-winding wristwatches in the 2019 range—the Marine 5517, the Marine Chronographe 5527 and the Marine Alarme Musicale 5547—share a number of defining elements, including those drawn from Breguet’s seafaring history.

All three have sunburst slate-gray dials in gold, second hand counterweights with the maritime signal flag corresponding to Breguet’s initial, côtes de Genève finishing on their calibers to evoke a ship’s deck boards, rudder designs on the gold rotors and the words Horloger de la Marine (“chronometer-maker to the navy”) engraved on the caseback.

The timepieces collectively diverge from the past in two significant ways: They are encased in sporty, lightweight titanium (and come with titanium bracelets in satin-brush finishes), and they boast modern, silicon-enhanced movements.

The musical alarm model 5547, which retails for $31,200, is the most complicated. Powered by an exceptional caliber equipped with two barrels to provide enough energy to sound the alarm, the watch features a push button at 8 o’clock to activate or deactivate the alarm. When the function is enabled, a marine bell appears in an opening at 12 o’clock, beneath the Breguet signature. The caliber also allows the display of a second time zone and date.

All three models feature another design signature that harks back to Breguet’s celebrated past: The watchmaker’s famous faceted, open-tipped hands, pointing the way forward.