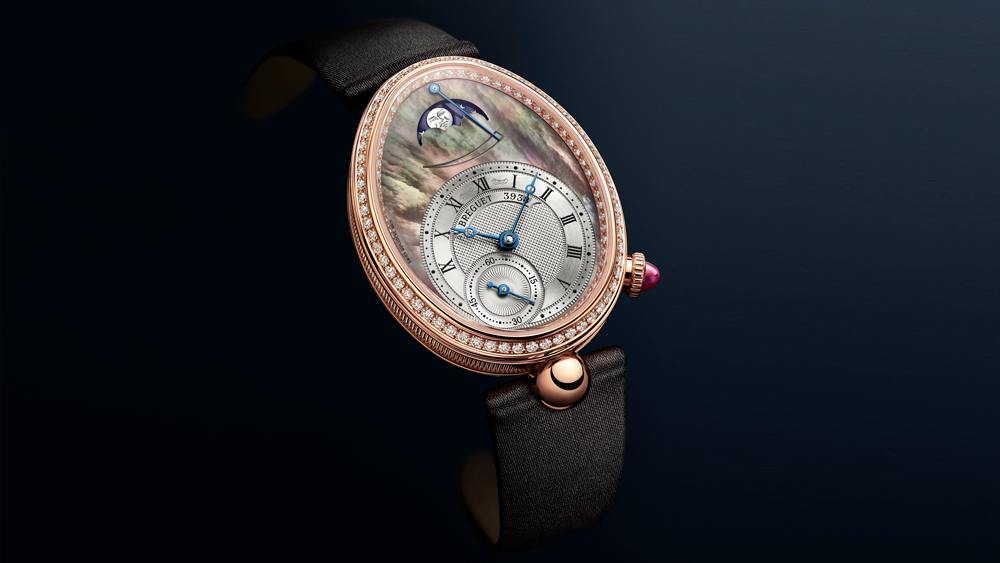 Since its introduction in 2002, the regal Reine de Naples wristwatch from Breguet has spawned nearly 30 iterations. The latest version of the ladies’ timepiece with the fetching egg-shaped silhouette, the Reine de Naples 8908, made its debut this year at the Baselworld watch fair in Geneva—and she’s a beauty.

Enclosed within an 18-karat rose-gold case swathed with 128 brilliant-cut diamonds, the model’s pièce de résistance is a dial—individually numbered and signed—partially crafted from iridescent Tahitian mother-of-pearl. The material complements the Reine de Naples’ signature off-centered layout, which finds the moonphase and power-reserve indicator at 12 o’clock, and the hours chapter and small seconds at six and seven o’clock, respectively.

The placement of these functions takes its inspiration from the world’s first known wristwatch, which master watchmaker Abraham-Louis Breguet created for Caroline Murat, Queen of Naples and sister of Napoleon Bonaparte, between 1810 and 1812.

Known as model No. 2639, the timepiece was an oblong-shaped repeater watch that came with a dainty bracelet famously made of hair woven with golden threads, allowing it to be worn on the wrist. According to records maintained by the Breguet Museum located on Paris’ Place Vendôme, the watch was equipped with a detached lever escapement, thermometer, and fast/slow indicator off the dial (the moonphase and a power-reserve indicator replace these elements on reference 8908). It was delivered on December 21, 1812, with an engine-turned silver dial boasting Arabic numerals.

In addition to its self-winding movement, the modern-day edition of the wristwatch features cutting-edge Swiss movement technology, including a silicon escape wheel, a silicon balance spring, and an in-line lever escapement. The piece has a 45-hour power reserve.

Worn with a black satin strap with a diamond-set folding clasp, the Reine de Naples 8908 retails for $36,100. (It’s also available on a rose-gold bracelet.)