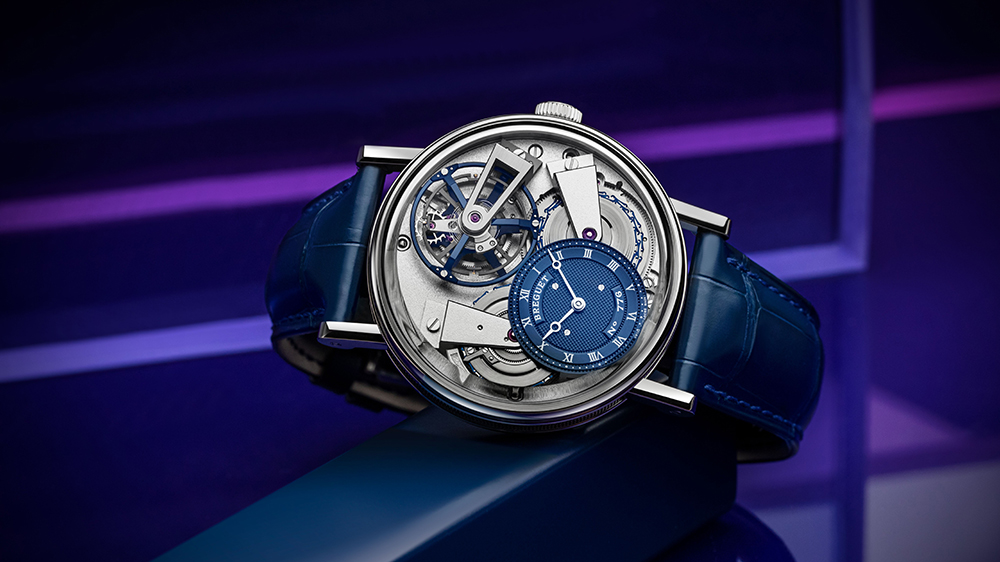 It’s been 221 years since the birth of the tourbillon, and Breguet wants to celebrate.

The watch company just added a new model to its Tradition line of historically inspired watches in honor of the centuries-old mechanism. To recap, Swiss-French watchmaker (and company founder) Abraham-Louis Breguet patented the world’s first tourbillon on June 26, 1801. The complication was constructed to counter gravity’s effect on a watch’s precision. Breguet’s latest addition is a nod to the original, with, of course, an array of modern updates.

Dubbed the Tradition 7047 Tourbillon Waltz, the 41 mm timepiece sports a platinum case with a silvered dial and an anthracite movement. (You can also opt for an 18-carat rose-gold case with a black dial and a rose gold-plated or anthracite movement.) Naturally, the centerpiece is the fusée-chain tourbillon. It features touches of blue throughout to highlight the iconic complication that has evidently stood the test of time.

A view of the Tradition 7047 Tourbillon Waltz’s dial (left) and caseback (right).  Breguet

The color scheme mirrors Breguet’s Tradition Quantième Rétrograde 7597. Launched in May, this piece elegantly plays with blue and gray just like the new release. Where the two models differ, though, is their movements. The former runs on a self-winding movement while the latter is powered by a hand-wound movement.

Located in the heart of the new tourbillon, the Calibre 569 is composed of 542 components. The movement oscillates at a frequency of 2.5 Hz and has a 50-hour power reserve. It is also equipped with a silicon balance spring and silicon elements in the inverted in-line lever escapement to ensure it’s resistant to both corrosion and magnetic fields. You can view it in action via the watch’s sapphire crystal caseback.

Up-close view of the off-centered dial and tourbillon.  Breguet

Elsewhere, the off-center gold dial is decorated with Clous de Paris guilloché and sports engraved Roman numerals as well as the famous open-tipped Breguet hands. The watchmaker says the newcomer is secured by three screws just like the former Breguet that inspired its design. To top it off, it’s fitted with a luxe midnight blue alligator strap.