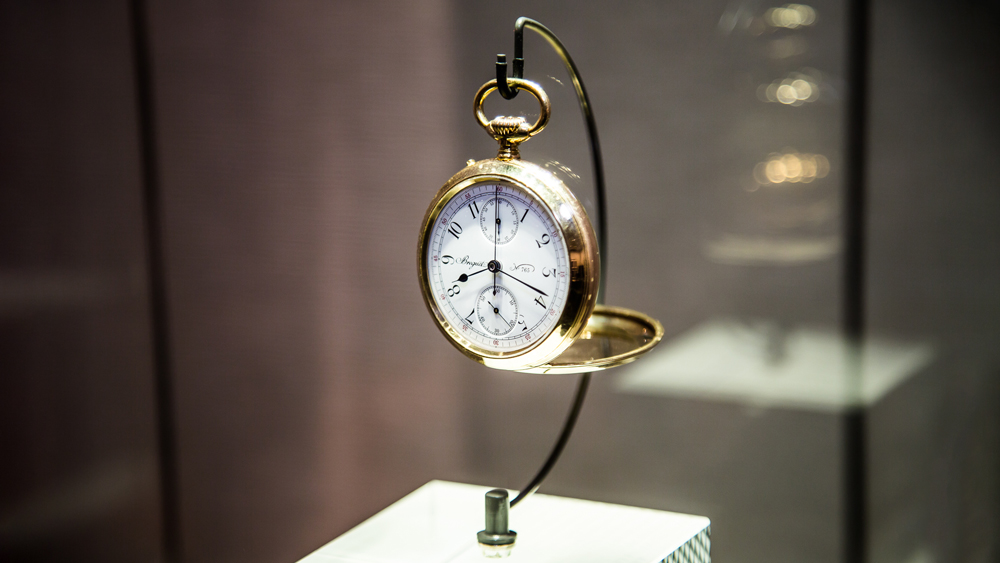 Like many such affairs, the recent opening of Breguet’s boutique in New York City’s St. Regis Hotel was visited by the brand’s latest Hollywood ambassador. In this case, however, the star in question was not a human, but a timepiece—a replica of the Breguet pocket watch that was a close personal possession of Sir Winston Churchill.  Made for the recently released Darkest Hour, starring Gary Oldman, the timepiece is true to the exterior details of the original. Unfortunately, the resemblance is only skin-deep; re-creating the formidable movement of the original minute repeating split-seconds chronograph was not attempted.

The original pocket watch was made for Churchill’s grandfather, the 7th Duke of Marlborough (whose coat-of-arms can be seen on the case back), in the early 1890s. It was later given to Churchill, who enjoyed it most of his adult life, and acquired the nickname “the Turnip” among his family. The watch was a near-constant companion during Churchill’s public life, including the wartime years, and the elongated links of the fob can be seen in many of his best-known portraits.

Breguet is now famous for its painstaking reproductions of its past work, including the No. 5 and the Marie Antoinette watch, which were both copied—to the greatest extent possible—down to the smallest detail. However, the Churchill replica did not receive the treatment to the same extent as those watches, either because of its status as a movie prop or due to the fact that the original piece—despite its complication and awe-inspiring provenance—is not a seminal example of the firm’s work.

By 1890, the firm’s fortunes were ebbing. The grandson of founder Abraham-Louis Breguet had sold the company in 1870 to his lead watchmaker, Edward Brown (whose family would control the company for the next century), and its timepieces had evolved away from the style of the founder to an appearance more typical of Swiss watches of the time. Breguet—and Churchill for that matter—would go on to find further challenges and successes in the 20th century.

Anyone wishing to view their intersection in history can see the original “Turnip” on display inside the Churchill War Rooms—maintained by the Imperial War Museum—in London’s government district.