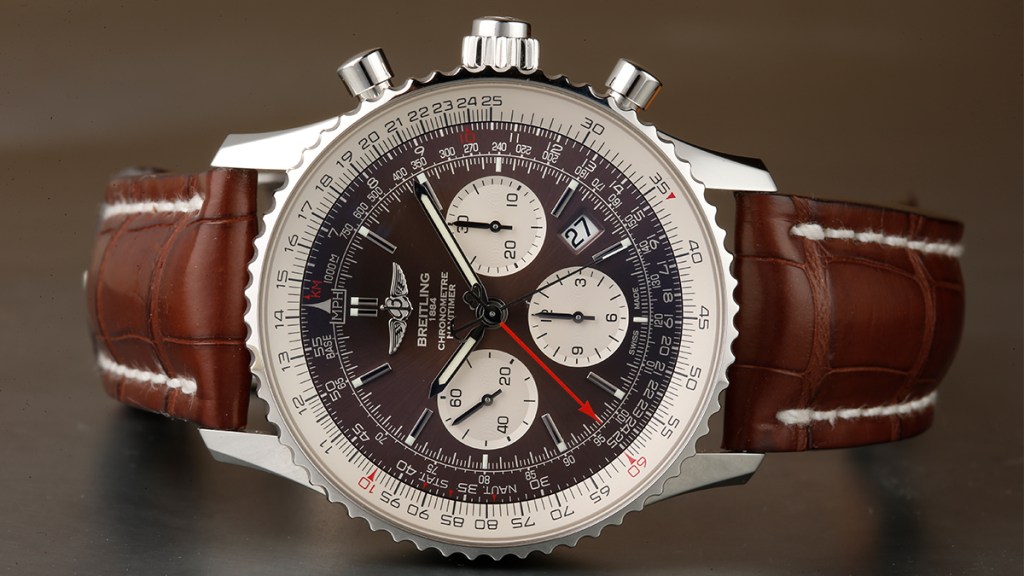 With the launch of its first modern in-house manufactured split-seconds chronograph movement in the Navitimer Rattrapante (from $10,840) in March—and the subsequent sale of the company to CVC Capital Partners in April—it has been a busy first half of the year at Breitling. While the latter is still noteworthy, news of the former came as more of a surprise given the challenging nature of the complication.

The Navitimer is one of the most recognizable watches of the brand’s 133-year history—not to mention one very few chronographs on the market with a nearly uninterrupted production run (more on that later).  Before taking a closer look at the Rattrapante, here’s a quick history lesson on what made the Navitimer the legend it is today.

Though the first Breitling Navitimer formally launched in 1952, the piece was actually an evolution of the Chronomat chronograph from a decade earlier. Equipped with a slide rule displaying STAT for standard mileage, KM for kilometres and NAUT for nautical miles, it allowed pilots to quickly work out calculations of both speed and fuel consumption. The release of the Navitimer in ’52 marked the beginning of the brand’s partnership with the Aircraft Owners and Pilots Association, with the piece wearing the association’s double-winged logo on its dial.

Through a mix of clever product placement and strategic partnerships, the Navitimer’s popularity rapidly spread through the aviation realm. The brand forged on as the official instruments supplier to nearly every major aircraft company; indeed, it was even fitted in the Boeing’s first jetliner, the venerable 707.

In its first iteration, the Navitimer was powered by the Venus 178 manually-wound movement, aside from the 1954 production run which was fitted with the same Valjoux 72 that was powering the Rolex Daytona of the era. Little changed though the late ‘60s, until Willy Breitling and Jack Heuer became involved with Gérald Dubois, who was working for a company that would one day become Dubois Dépraz. This cooperation eventually led to the creation of the Caliber 11—one of the earliest automatic chronographs to hit the market, most notably recognized by its crown at the 9 o’clock position opposing its chronograph pushers at 2 and 4.

Where things get muddy is the arrival of the Quartz Crisis of the late ‘70s. Forced to sell the company in 1978, the company itself went to Ernest Schneider (the owner of Sicura), whereas unused parts were divided between Sinn and Ollechs & Wachs. For a brief period before the brand was rebooted, Sinn-branded versions of the Navitimer (built entirely of Breitling components) were sold before a lawsuit from the new Breitling put a halt to the practice. To this day, Sinn still offers a more affordable variant of the Navitimer known as the Sinn 903ST.

Through its modern revival in the ‘90s, the Navitimer that many came to know and love remained powered by a modified variant of the Valjoux 7750 until its 60th anniversary in 2012, when a special blue-dialed edition was offered with Breitling’s first in-house manufactured caliber—the Breitling Calibre 01. The calibre has since spread through Breitling’s catalog, and the ever-growing demand for in-house manufacture calibers leads us to the new king of the Navitimer collection: the Navitimer Rattrapante.

Breitling’s announcement of their new split-seconds chronograph came as a surprise to many. Not only has the brand never created their own in-house version of the complication in their 133 years of business (the Breitling Duographs of the ‘40s and ‘50s used calibers from Venus), but opting to build the complex caliber is a real “swing for the fences” sort of play on the brand’s part. The complexities of a split-seconds mechanism make it one of the most highly regarded complications on the market, and it’s safe to speculate that this endeavor was taken on to showcase their capabilities to prospective buyers of the brand.

Motivations aside, the Breitling Calibre 03 is impressive. The modular nature of the Calibre 01 provided a sound foundation for the split to build upon. A 70-hour power reserve at an operating frequency of 4 hertz (28,800 vibrations per hour) indicate that the running capability was not impacted by the modification. The forces exerted by the stopping and “catching up” of the split hand are troublesome when it comes to maintaining accuracy and energy reserves, and given Breitling’s focus on chronometer certification, movement engineers were pressed for a solution.

The end result included the filing of two patents, one for a new design of the isolation mechanism that acts on the split-seconds, and a unique o-ring clamping mechanism (operating similarly to rubber bicycle brake pads) that controls the hand’s stopping and starting. What’s more, Breitling is quick to point out that the entire split mechanism is comprised of only 28 parts, which we can hope will add to its overall reliability.

The new Navitimer Rattrapante will be offered in steel as part of the brand’s core line for $10,840 on a brown crocodile strap, as well as in a limited 250-piece red gold edition with a sapphire display caseback priced at $32,895 on a black rubber strap. The new models have just arrived in Breitling boutiques and retailers worldwide as of this past month. At this time, the Rattrapante won’t be available through the brand’s online boutique.