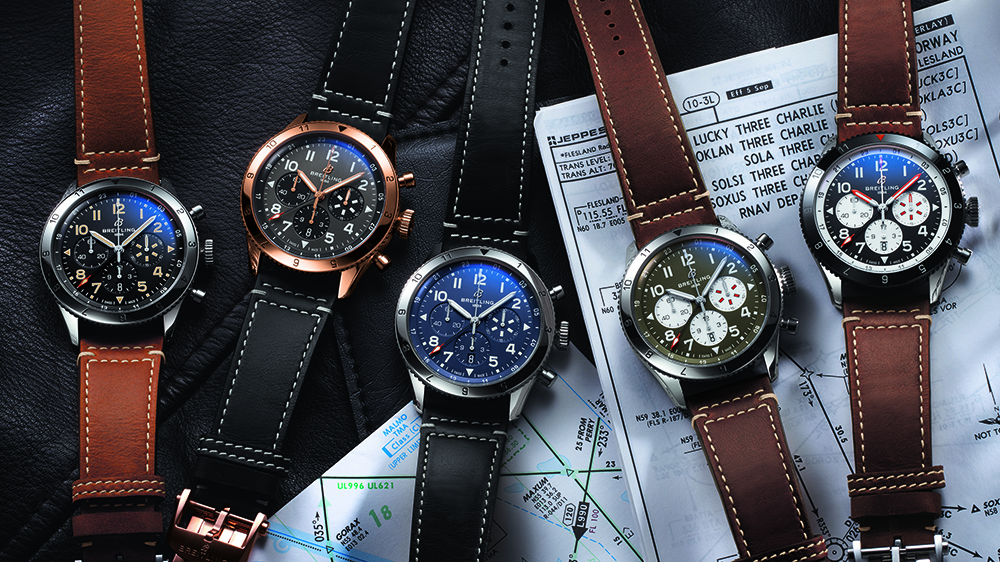 Breitling threw a shindig in Dallas yesterday, to offer a first-hand look at the new Super AVI collection of aviation watches, along the vintage war planes that inspired them. The four legendary planes flew in formation into the National Aviation Education Center in Dallas as part of a video shoot for Breitling’s marketing campaign. The watches celebrate the early days of aviation, when planes were made for combat, reconnaissance or rescue missions – you might call them tool planes – and they had to be robust, reliable, lightweight and powerful. Breitling’s involvement with cockpit instrumentation dates back to the 1930s, when its Huit Aviation department began making cockpit clocks. During the war, when these planes were active, the company didn’t officially supply instrumentation to the Allies (the Swiss were officially neutral), but there were plenty of clandestine supply missions, according to Breitling collector and historian Fred Mandelbaum, who was on hand for the launch.

In 1953, Breitling created its first cockpit-inspired watch for the wrist, the Ref. 765 AVI, which quickly became known among pilots as the “Co-Pilot.” Breitling released a re-edition of that model last year, the AVI Ref. 765 1953. The Super AVI collection is a regular-production evolution of that watch. Each of the four models in the series is inspired by a particular plane.

The Super AVI P-51 Mustang was built by North American Aviation over a span of 120 days in 1940. The P-51’s low-drag wings and engine-cooling system, considered experimental at the time, gave it unprecedented speed and range. The Mustang was first delivered to the British RAF, which had some issues with the engine, which was eventually replaced with a Merlin engine, made by Rolls Royce. It allowed the plane could go faster and climb to higher altitudes, and it became the best all-purpose fighter of its time. There are two versions of the watch, one in steel with a black dial and gold-brown leather strap ($10,100), and the other, a boutique-special, in 18k red gold with an anthracite dial and black leather strap ($23,650).

The Super AVI Tribute to the WWII naval aircraft Vought F4U Corsair plane adopts the plane’s blue livery. The Corsair was notable for its unusual bent wings and oversized propeller. The wings were bent in order for the landing gear to allow space for the oversized propeller. The Vought F4U Corsair was made to execute tricky takeoffs and landings from carriers and remote landing strips, when speed and lift were essential. It was the first single-engine fighter to crack the 400 mph mark. The watch has a blue dial, tone-on-tone chronograph counters and a black leather strap ($10,100).

The military-green color of the dial of the Super AVI Curtiss Warhawk, with white contrasting chronograph counters and red accents, is a play on the P-40 Warhawk’s signature shark-mouth nose art. Conceived as a pursuit aircraft, the Warhawk first flew in 1938 and proved itself as a master of agility, capable of jaw-dropping turns. It could also tolerate harsh weather conditions and severe combat damage—as its namesake watch surely does. It was known as the rebel of the skies ($10,100).

And finally, the only one of the foursome with a ceramic bezel, the Super AVI Mosquito, actually emulates a plane famously made out of wood. Aluminum and steel shortages were common during the war, so the engineers behind the de Havilland Mosquito made it using a mixture of wood and adhesives. The “Wooden Wonder” caused shock waves when it outperformed its metal contemporaries, and it became one of the fastest planes built between 1940 and 1950. Its superior maneuverability allowed it to multitask in roles as far-ranging as light bomber, night fighter, transport and photographic reconnaissance aircraft. The watch ($10,250) has a black dial with white contrasting chronograph counters. Its red and orange elements recall the roundels and markings found on the plane.

According to Kern, the planes were chosen because they were associated with the Allies, and Breitling has an American/English bent, something also evident in the cars the brand has chosen to be associated with: Shelby, Mustang , Corvette. “They’re cool,” says Kern, “and people like to have these anchors of coolness.”

Kern says Breitling has enjoyed huge success in recent years, and intends to step up production considerably. The company recently got an investment boost when Partners Group, a private equity firm, acquired a 25%. CVC Capital Partners remains the major shareholder. “Private equity firms generally buy companies to make them better and then sell them after four or five years,” says Kern. “In this particular case, CVC is not ready to sell us now because we’re doing so great. They want to stay on board because they believe in our potential. But selling 25% and giving back some money to the shareholders absolutely made sense.” What does it mean for Breitling going forward? “It means we can remain independent,” says Kern, “which is great.” He doesn’t say to what extent the company will increase production—Breitling currently makes 230,000 watches a year—but says, “it will be substantial.”

All four Super AVI models are GMTs that track a second time zone on a 24-hour scale on the inner bezel. As pilot’s watches, the dominant feature of the collection is legibility; large, lume-filled Arabic numerals and large proportions: the case is 46mm. The bezel is knurled and the crown is notched for easy gripping by gloved hands. The top-stitched calfskin strap is aesthetic nod to aviation, recalling the seams stitched on leather flight gear of the era. Under their carriage, they contain the automatic in-house caliber B04, which is COSC-certified, with a 70-hour power reserve.