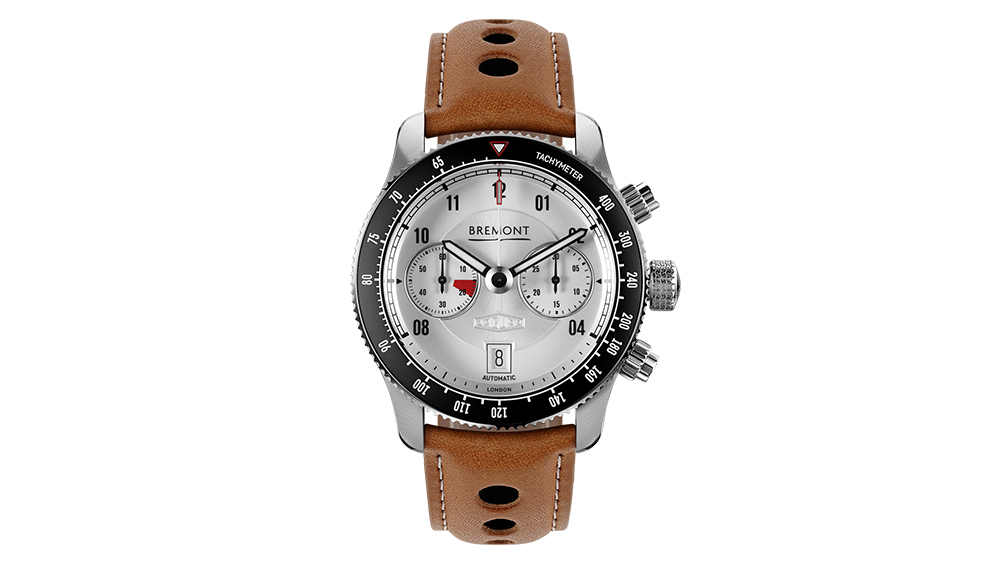 The Bremont and Jaguar partnership just got a little more timely—literally.

The two British luxury brands have just unveiled their latest collaboration—the C-Type watch. Inspired by the legendary race car of the same name, the sporty timepiece is exactly the kind of item you’ll want to pair with driving gloves next time you’re behind the wheel of a classic Jag.

Jaguar introduced its first postwar sports car, the XK120, at the London Motor Show in 1948. Three years later a racing-focused version of called the XK120-C (the C stood for competition) was introduced. That vehicle would come to be known as the C-Type and sported an even curvier aluminum body and came equipped with a dual-overhead cam 3.4-liter straight six engine and disc brakes, which was a first for a race car. The speed machine would prove to be a success on the track, claiming victory at the 24 Hours of Le Mans in 1951 and 1953.

The C-Type watch’s design showcases several allusions to the vehicle it’s based on. Its 43mm case has a fluid shape and is topped anodized aluminum bezel, both of which are meant to call to mind the original car’s bodywork. Underneath, its domed, scratch-resistant sapphire crystal, you’ll find a silver-plated multi-level sunburst dial design with a brushed dial ring, heritage Jaguar logo, black gloss numerals, two white sub-dials and a chronograph hand just like the needle on the original car’s tachymeter. The stainless-steel case back has a decorative coin depicting the C-Type’s badge, too. Rounding out the elegant package is a tan brown leather racing strap.

The watch should also be plenty capable thanks to its modified calibre 13 1/4″ BE-50AV automatic movement, which houses 27 jewels, a Glucydur balance wheel, Anachron balance spring and Nivaflex mainspring. It also possesses a 42-hour power reserve.

The Bremont and Jaguar timepiece is available now through the watchmaker’s website for $6,495. If you’re looking to add other car-inspired watch to your collection, several of the brands’s other collaborations are still available, including last year’s E-Type. With seven to choose from, every Bremont and Jaguar fan should find something to suit their wrist.