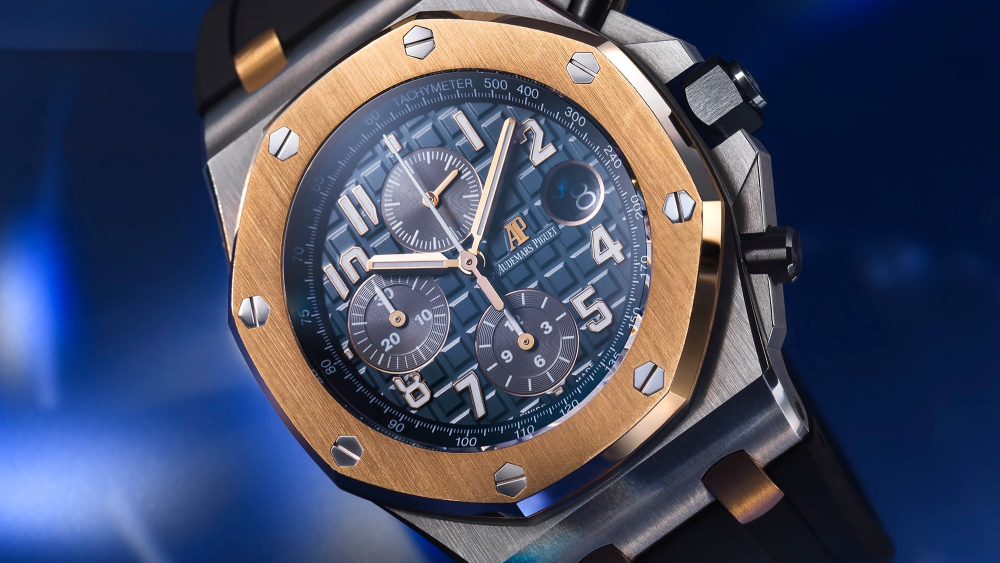 One of the world’s top purveyors of fine watches has just added another horological feather to its cap.

Bucherer, one of Switzerland’s top sources for exquisite timepieces since 1888, is introducing Audemars Piguet’s Royal Oak Offshore Chronograph to its Blue Collection. The watches that make it into the collection represents the best of modern horology’s “daring pioneers,” as the retailer puts it.

Only available in Europe exclusively through Bucherer boutiques, the signature chronograph is already one of Audemars Piguet’s most recognized watches, but, as is the case with every member of the Blue Collection, its palette has taken on some aqua inspiration. But the shift to watery colors across the dial and strap aren’t entirely new. When the Royal Oak originally launched in 1972, it was crafted with a blue Tapisserie dial which communicated its modern, sporty feel and this is a welcome return to form. And while there are other Royal Oak’s with the blue waffle-designed dial, this one is described as a “Mega Tapisserie” for its oversize version of the pattern and it is the only current chronograph iteration that also comes with blue subdial counters.

A closer look at the watch’s clear caseback and signature hardware.  Courtesy of Bucherer

Measuring 42 mm across and 14.54 mm thick, its case is forged from stainless steel with a contrasting 18-karat pink gold bezel––a combination also specifically developed specifically for the Blue Collection. Living up to its Offshore moniker, it is water-resistant up to 100 meters and runs on an automatic 3126/3840 caliber movement with 50 hours of power reserve. And if you like the watch but aren’t wild about the strap, it comes with three different options to suit a variety of styles: blue or black rubber and black alligator.

For those looking to make the Royal Oak their own but desire a bit more flash, the collaboration also resulted in a diamond-encrusted model with a crisp white dial and coordinating rubber strap.

The special-edition Audemars Piguet Royal Oak Offshore with two-tone case sells for approximately $38,217. But if you want to get one on the wrist, you won’t find one at your local AP boutique. Contact Bucherer for further details.