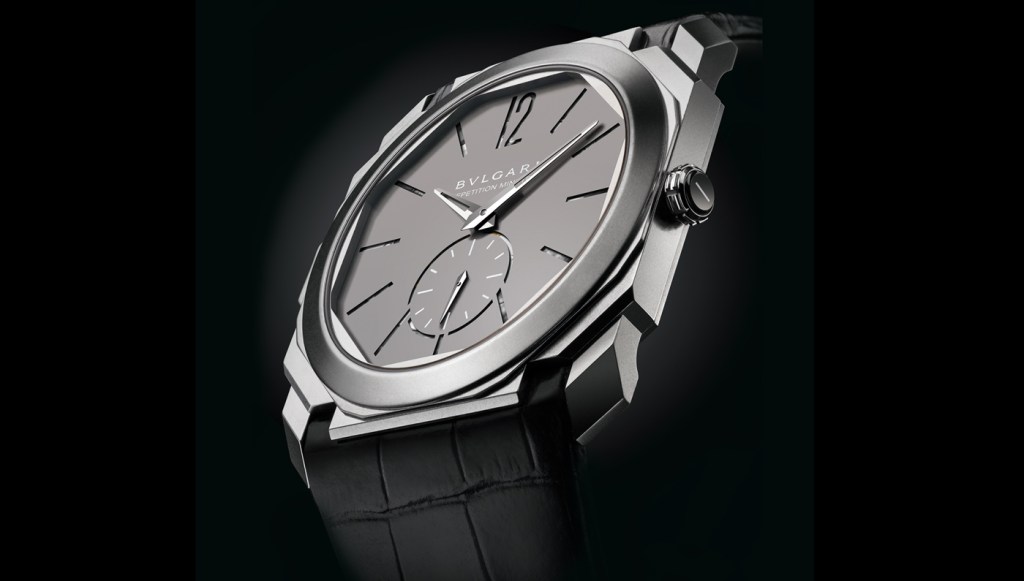 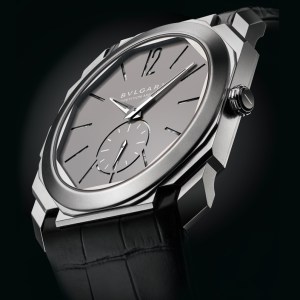 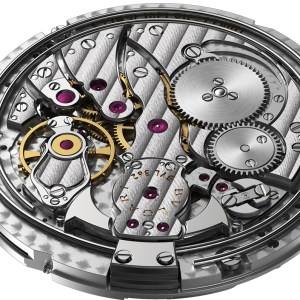 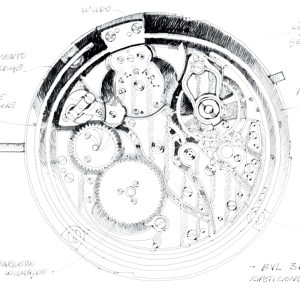 When Bulgari designers set out to build the world’s thinnest chiming watch, their goal was to blow the dust off of what typically is a very classical complication. “Minute repeaters are usually an expression of an old-fashioned way, a traditional way—they are expressions of aesthetic codes of the past,” says Guido Terreni, managing director of Bulgari Watches. According to Terreni, Bulgari’s Octo Finissimo Minute Repeater is designed to be used. “We wanted the minute repeater to be on the client’s wrist, not stay in the safe,” explains Terreni. “We wanted to create an object that was for daily wear.” The watch’s svelte profile at 6.85 mm thick certainly encourages that.

As Terreni points out, superthin movements are not simply available for purchase from suppliers, they have to be developed in-house. While Bulgari had acquired the skill sets for building exceptional chiming watches through the purchase of the Gerald Genta and Daniel Roth brands in 2000, it had to cultivate its own expertise in ultrathin movements starting with the Octo Finissimo Petite Seconde.

“We could reproduce everything that we learned in all these decades of making chiming watches; the challenge was to do it in such a small height,” says Terreni, who notes that they could have gone even slimmer if they had chosen to. “We could have gone down to 2.9 or 2.88 mm, but then the main plate would have been very delicate. And when you have the push button or lever, the pressure could deform the plate.” So, for the sake of reliability, the caliber BVL 362 movement measures 3.12 mm.

The technical aspect of the design merges with the aesthetic in the brand’s choice of titanium for the case material. Finissimo’s faceted, sandblasted titanium case not only endows it with bold, disruptive character, it also enhances performance, because in addition to being modern, lightweight, and robust, titanium is also an excellent conductor of sound. “My idea as a designer is that the material has to define the product itself,” says Fabrizio Buonamassa Stigliani, director of Bulgari’s watch design department. “We chose titanium not just for the quality of sound, but also for the texture and the color.”

But for Stigliani, an Italian with a background in industrial design, the golden design rule of form follows function is not enough. “For me, it’s more about beauty follows function,” he says. “Italian design merges beauty and functionality in a completely different way. Our watches are not driven only by performance. The performance is a part of our design, but the aesthetic motif has exactly the same importance. Italian design is very difficult to explain, because it is a very unique mix of functionality, aesthetic beauty, and sense

Bulgari also chose titanium for the sliver of a dial, dispensing with applied indexes and instead laser cutting the hour markers and Bulgari’s signature 12 into the metal. This innovative approach not only lends the design its pure, contemporary appeal, it also enables the sound to travel through the entire case, which is a must when you are working with such compact space. The unprecedented notion of an ultrathin minute repeater could be viewed as a contradiction in terms, says Terreni. “When you have a minute repeater, you need case volume to chime, because it’s an issue of acoustic resonance,” he explains. “It’s the case that produces the sound.”

At its heart and soul, a minute repeater is a musical instrument that must be fine-tuned for optimal sound. In addition to using titanium for the case and dial for heightened acoustic resonance, Bulgari has fitted the movement with traditional round, steel gongs to achieve the purest, ideal tones without a clanging metallic quality.

And while Bulgari’s master watchmakers apply time-honored tuning skills to the Octo Finissimo Minute Repeater, the brand is also using cutting-edge technology. The watch is put to the test with a special machine that measures sound quality far beyond the limits of the human ear. It assesses the purity of the notes, as well as the intensity and pacing over the course of the chime. It also boasts the capability to isolate and analyze each hammer, like a mixing board in a recording studio. After all, this is, as Bulgari intended, not your grandfather’s minute repeater. Bulgari, 866.372.6344, (bulgari.com)