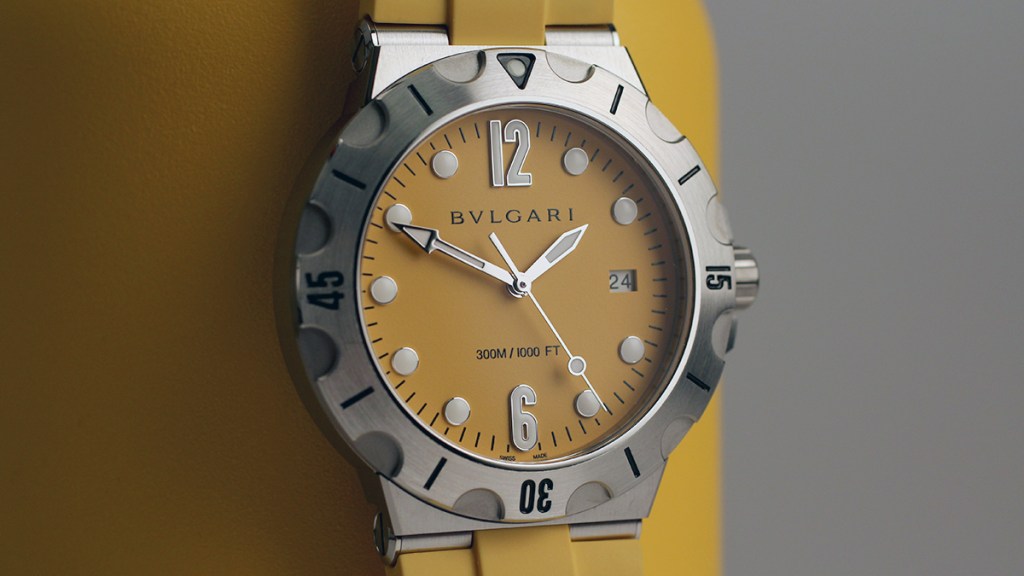 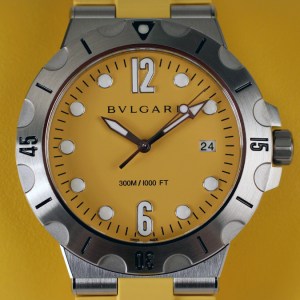 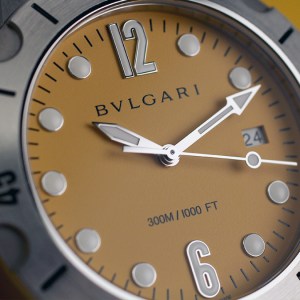 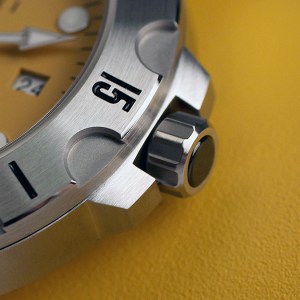 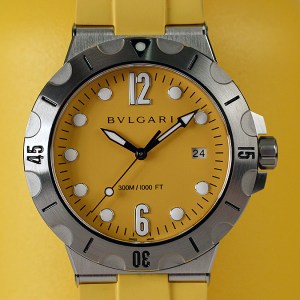 Now into its 23rd year, the Bulgari Diagono Scuba ($6,550) remains a unique offering in the dive watch category. Its scalloped bezel and integrated strap give the piece a unique aesthetic, all while adding to its functionality and wearing comfort—both of which are key in the proper execution of a dive watch. This past month, Bulgari unveiled a trio of new variants for the collection, including a white, orange, and punchy yellow dial variation seen here. 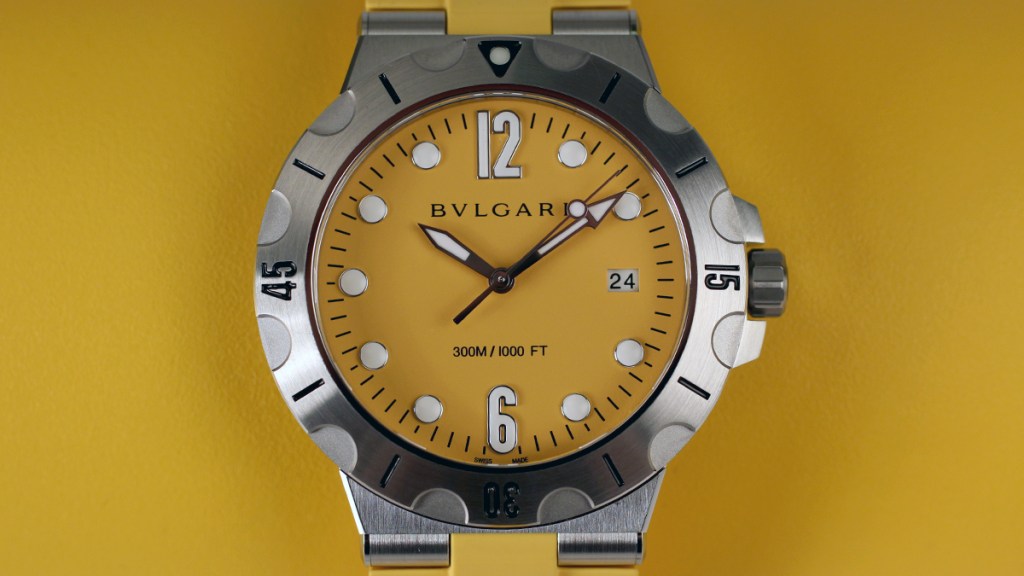 Though at a cursory glance it’s clear the Diagono Scuba is a dive watch, its Bulgari DNA also shines through in spades. Large applied 12 and 6 numerals—a staple of Bulgari’s watches—offer significant legibility alongside its well-lumed round hour markers. Additionally, the wide lug design seen here is used in varying forms across the entire Diagono line. This design detail is quite handy, as it allows for a shorter lug-to-lug width, making the piece fit well on a wide range of wrist sizes. At 41mm, the Scuba will wear a bit small for those in the mid-six foot range, though anyone with average to slim wrists (including women) will find the Scuba very comfortable. Other variants of the Scuba are available on an integrated metal bracelet, however at this time the new summer-ready pieces are only offered on color-matched rubber straps. 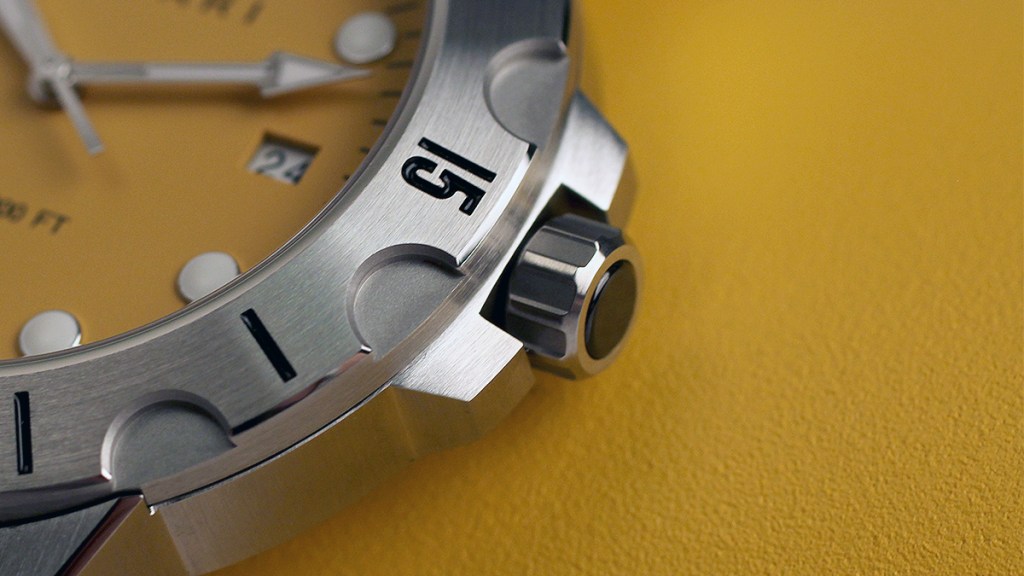 As with the balance of Bulgari’s collections, the Diagono Scuba is powered by a caliber that is both designed and assembled entirely in-house—the BVL191 to be precise. The self-winding movement oscillates at 28,800 vibrations per hour, and offers a power reserve of 42 hours. That’s fairly standard (if not a little low) these days. Though hidden beneath a steel caseback, the caliber is finished to the same impeccable level we’ve seen from past offerings, including Côtes De Genève decoration. Externally, the 120-click unidirectional rotating bezel has a firm action to it, ensuring there’s little risk of it being moved inadvertently, while its scalloped design allows for easy operation. 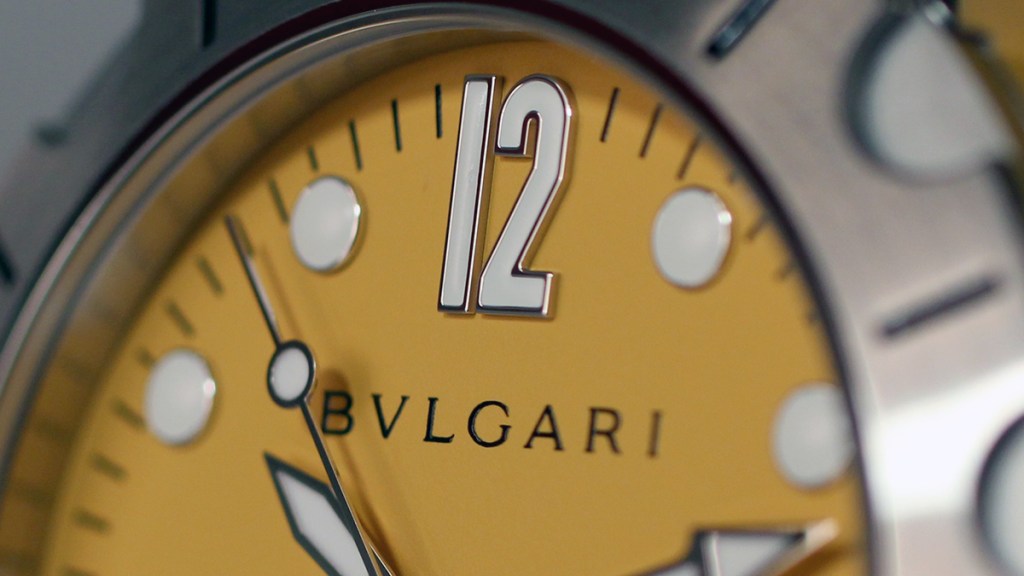 How to Pair it

Being a bold color from the get go opens many doors for how to wear the new Diagono Scuba. On one hand, having it be the sole punch of color alongside all-white or all-black attire allows the piece to shine all on its own. That said, pairing it with shades of blue, including these blue Ralph Lauren boat shoes, or some of the casual offerings from the new Louis Vuitton America’s Cup collection gives the color some complimentary brightness to play off of. If you’re really looking to push boundaries, combining the yellow Scuba with this pastel pink suit from Bally would do the trick. 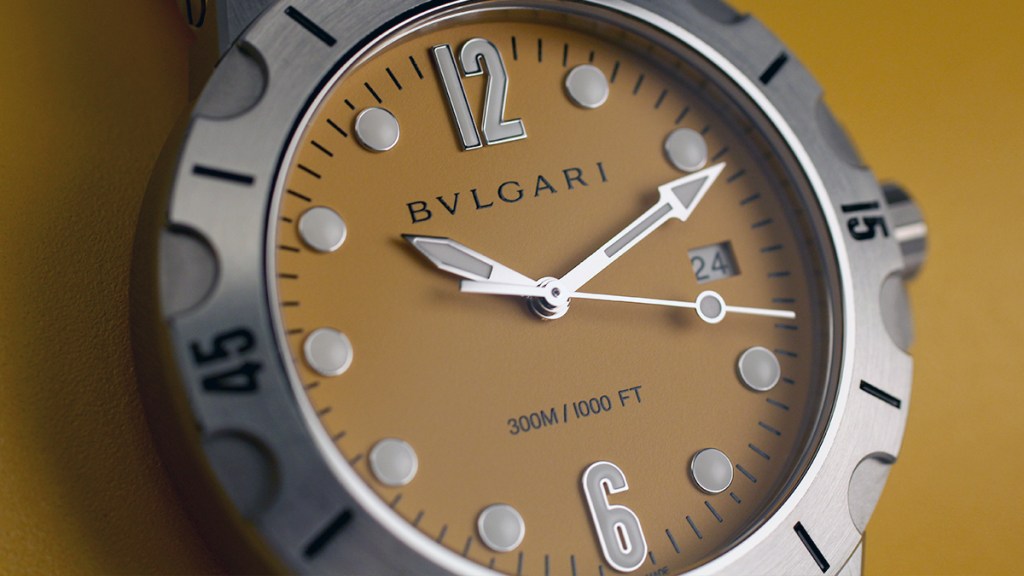 How to Get it

The new Diagono Scuba—in all three bright colors—just surfaced on Bulgari’s website this past week, and is now available through Bulgari boutiques and authorized retailers worldwide.