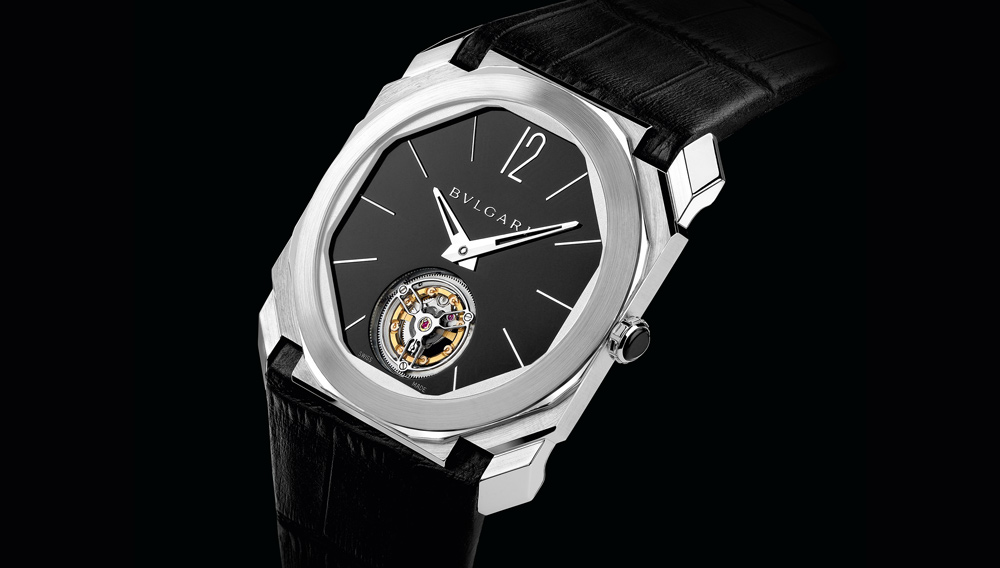 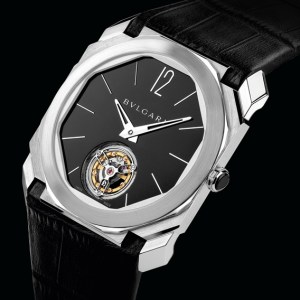 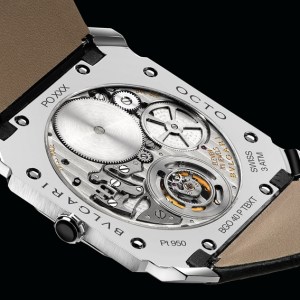 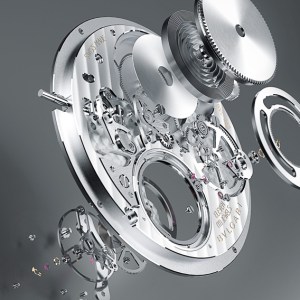 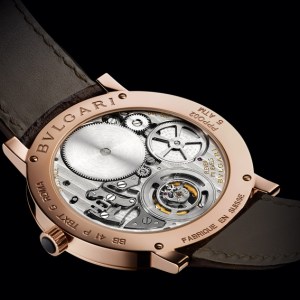 Out-of-the-box design allows Bulgari to squeeze a tourbillon into its thinnest dimensions ever.

“When we sent the design for the Finissimo to our case maker, they called to tell us that we had forgotten to send them the file for the case back,” recalls Guido Terreni, managing director of Bulgari’s watch division. The unusual integrated case back construction was just one strategy that Bulgari’s watch designers utilized to produce 2014’s Octo Finissimo watches, the brand’s entry into ultra-thin timepieces. Of the two sleek and angular models, one was an elegant small seconds watch. The other, a flying tourbillon, was altogether different. With a movement just 1.95 mm thick, the Octo Finissimo Tourbillon is the world’s thinnest by a considerable margin.

“The most important part for us as a company is the aesthetic,” explains Terreni. “When we began in early 2011, there were no ultra-thin tourbillons on the market. The thinnest at that time was a little less than 3 mm, which is almost the thickness of a standard ETA movement. It did not give the impression of an ultra-thin watch.”

Bulgari’s tourbillon movement was developed in conjunction with outside specialists who provided small-parts fabrication and prototyping services, but it was spurred by key directives from within. Following the contemporary trend for thinner watches with still-generous diameters, Terreni and his team employed a broad, nearly 33 mm diameter to distribute components laterally. They also took a cue from the simple construction of a flying tourbillon, which is anchored only at the base. The movement of the Finissimo flying tourbillon is literally flying itself; the parts are fixed to a single plate with absolutely minimal upper bridging that might add height.

The approach imposed rigorous technical demands. To help absorb the friction of parts without the vertical stabilization of bridges, a bearing system was applied to the tourbillon carriage as well as the winding barrel. Implementing this was tricky and had to be reworked three times over the course of a year’s testing before the natural play in the system fell into acceptable parameters.

Another concern was flex. Not only does a single-plate movement have a greater propensity to flex, but the very thin case with a wide opening crafted in soft materials such as gold or platinum added to the quandary. “For the first time we had to consider forces on the watch such as when you tighten the strap,” says Terreni. “We eventually had to reconsider the way the movement is set into the case and the way it is screwed together to provide a little extra room.”

After their debut in the new slimmed-down Octo case, both the small seconds and tourbillon movements appeared again this year in the new Bulgari Roma Finissimo case. This marks an expanded ultra-thin presence in the brand’s collection, to which Terreni plans to add models with a similar level of ingenuity. He concludes: “When you have to do something that has never been done before, you often have to rethink your customary ways of doing things from scratch.”