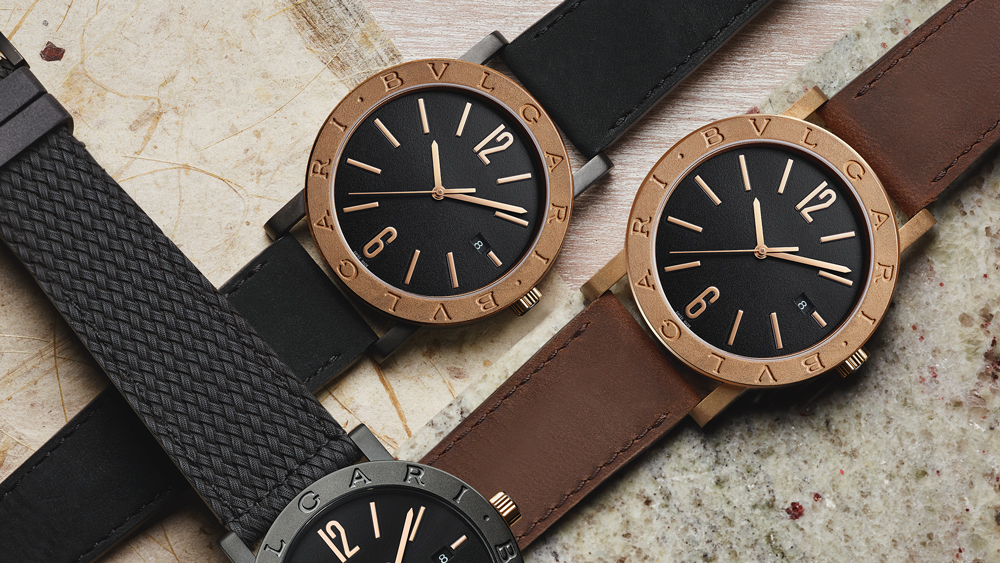 After generating headlines and winning acclaim for the past two years as the creator of the world’s slimmest automatic watch, the thinnest manual wound tourbillon, and the thinnest minute repeater – all in the Octo Finissimo collection – Bulgari has come back down to earth with two new everyday pieces that revitalize its classic Bulgari Bulgari collection.

The double-logo Bulgari watch was created in 1975 by the brothers Bulgari—Nicola, Gianni and Paolo—as a gift for the company’s 100 best clients. In so doing, Bulgari became one of the earliest brands to discover the power in creating limited-editions. By 1977, the Bulgari Bulgari was in production as a regular collection due to popular demand. Four decades later, it remains a staple. The Bulgari Bulgari takes its name from the fact that the brand logo appears twice on the bezel and sometimes not on the dial, as is the case with this new model. The engraving of the logo around the top and bottom of the bezel is a detail inspired by Roman coins. The minimalist design, with long markers and numerals only at 12 and 6, has changed little since it was first launched.

The new Bulgari Bulgari models may not contain record-setting movements like those in the Octo Finissimo collection, but they are not lacking in innovation. The men’s model is the first in the collection to be made in bronze, a material that creates a random patina unique to each watch. The result is a kind of individualization that you don’t often see in an everyday dress watch. There are three versions: one with a bronze case, another with a black DLC-coated stainless-steel case, and a third that combines black DLC with a bronze bezel.

Another surprise in the men’s model is the interchangeable strap system, a feature that has caught on among luxury watch brands this year. The concept of some kind of quick-change strap system that does not require a tool was once the purview of ladies’ fashion watches but is now ubiquitous among high-end brands. Of the two new Bulgari Bulgari models, only the men’s has the strap-change feature. It is delivered with a second strap – options include embossed rubber, alligator leather or leather – and both watch and straps come in a leather travel pouch with two strap compartments. Dials are black lacquered. It contains the automatic caliber 191, which is also used in the Octo Solotempo and Roma collections.

The new men’s Bulgari Bulgari comes with a second strap and a carryingpouch.  Photo: Courtesy Bulgari

The new ladies’ Bulgari Bulgari interprets another current trend in watches: the petite timepiece for women. In addition to the 33 mm diameter, the watch now comes in a 23 mm version, joining several other luxury brands that have introduced watches this year in widths under 25 mm – including Cartier, Rolex, Hermès, Corum, and Chanel. Instead of offering strap options on the new ladies’ models, Bulgari offers a variety of dial options, including anthracite, brown, black or mother-of-pearl, with or without diamond indexes. The movement is quartz, with or without a date window. The case and bracelet are steel or two-tone with pink gold and steel.

Women who still prefer large watches rather than the petite cocktail watches that seem to be a trend this fall can easily wear the 41 mm men’s model, since the design is gender neutral and the case is slim. Prices for the men’s are $4,000 for the black DLC, $4,500 for the black DLC and $5,600 for the all-bronze model. The women’s pieces range from $3,600 in the 23 mm steel version to $9,350 for the 33 mm two-tone gold and steel timepiece.