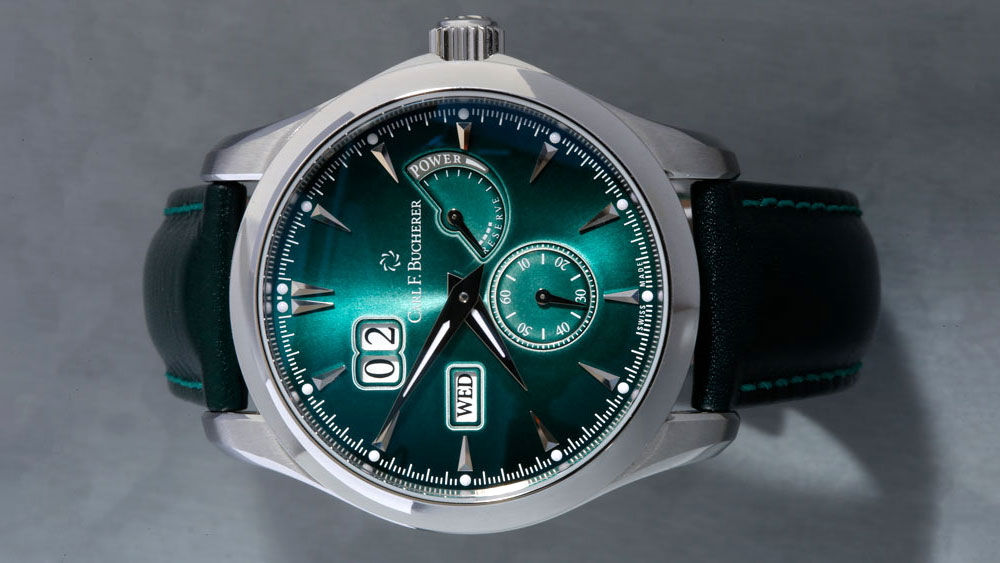 Though the Manero PowerReserve from Carl F. Bucherer is far from a new release (it launched back in 2013), we were still rather taken by the vibrant green hue that was added to the collection earlier this year. CF Bucherer was one of 11 brands to add green to its repertoire in 2017, and alongside its deep blue sibling, the dial change was a breath of fresh air to the otherwise conservative model range.

We’ve long been fans of all things CF Bucherer—a brand that was created at the founding of the famed Bucherer watch and jewelry store chain based in Lucerne. The brand started manufacturing their own in-house calibers in 2008, and with every new release we’ve been consistently impressed by the finishing of their movements and cases, as well as each piece’s overall design. We opted to examine the new PowerReserve to see if its sheen would wear off after a week on the wrist.

The Manero PowerReserve wins all the points here. The biggest flaw we found with the original variants of the piece was that the sectioned dials were a touch underwhelming. The use of two different finishes between the center of the dial and the outer perimeter under the hour indices was an interesting detail, though with the four separate indications to contend with, those original models were a bit busy. Even disregarding the color of the dial, having one single sunburst finish to the dial makes the design of the Manero PowerReserve much more cohesive.

Looking specifically at the dial and accompanying strap, there’s a lot to take in. For starters, this is not your average sunburst dial. Depending on the lighting and angle from which you’re looking, it has a unique fading to it—much akin to a vintage timepiece that might have seen a touch of sun over the years. Much like the perfect pair of distressed denim, CF Bucherer found the ideal gradient to ensure the Manero PowerReserve stands out from any other green dial on the market.  Matching this varying hue is a supple calfskin strap dyed in dark green, whose color also fades a number of shades lighter as it extends away from the watch case.

Powering the Manero PowerReserve is the CFB 1011 self-winding caliber, which adds a power reserve, day, and date indication to its base automatic caliber equipped with a peripheral rotor. This peripheral rotor design allows CF Bucherer to maintain a slimmer overall movement—in this case 6.3mm high—and allows for an unobstructed view of their movement architecture. In the never-ending sea of self-winding calibers that tend to all blend together, the architectural nature to the CFB 1011’s design is a welcome sight to say the least. At full wind, the piece has a power reserve of 55 hours.

The Manero PowerReserve is an impactful piece on the wrist, and it’s an ideal candidate for those wanting to sport a light pop of color. Tonal outfits in shades of grey, tan, or even deeper earthen tones would be nicely contrasted by this little hit of green. On the more casual end of the spectrum, the bold polos we recently covered from Ralph Lauren’s limited edition polo collection (the Tour Jacket Polo Shirt) would also be a perfect match.

Priced at $11,000, the green Manero PowerReserve (and its new blue sibling) are heading for retailers in October. Unlike the rest of the line, both new colors will be limited to only 188 pieces worldwide.